So Time Warner sent me a new cable modem in the mail a few weeks back…promising the new technology would improve my internet speeds - and I swear if it isn’t a bit slower than what I had…but maybe I’m just perma-skeptical when it comes to cable providers. So I just did a test (multiple tests on different speed measuring networks) and broadly came up with:

What are you guys getting?

It really depends, the synthetic speed is (in theory) 250 Mbps for download at my home office, but it is rarely that. At work, it’s a big pipe so about 900+ but who wants to sit there and play games

The trouble with speed comparisons is that is a combination of latency (how quickly does that first byte get to you) vs bandwidth (what kind of throughput can you manage). What consumer ISP’s often do is balance their cable network so that latency suffers but ‘peak’ traffic can shift the first 10 seconds or so with decent bandwidth.

The various speed tests make it difficult to really tell as most ISPs have cached the data those things use, so you really have to go on ‘feel’ of how you use the net in reality.

So, if it feels slower then they probably redid their capacity planning and on your ‘node’ you are getting either less juice or greater latency. Think of the stock holders!

Holy smokes that looks good. I was 20 down and 5 up for years - updated my cable modem, made a call to the cable company, and am now at 80 down and 15 up.

The problem with cable is that your bandwidth is shared. Depending on how your ISP provisions his infrastructure at your site, that may mean that you’re golden, it might also mean that at peak hours when you’re using your internet most, there’s 5, 10 or what have you other parties using the same line, which means your bandwith suffers horribly. It’s why i have stayed on DSL for the last 10 years even though i could get cable with (theoretically) 10x the bandwidth i get from DSL. The catch is that the cable provider here in Austria is notorious for not updating his infrastructure for years while continuously stacking clients onto the same lines. With DSL i get much lower bandwidth, but that bandwidth is not shared, that means i get the same bandwidth at 3 in the morning that i do at peak traffic hours.

I had 384kBit/s for years. Then I moved to where I live now and here I get 2MBit-6MBit, depending on… dunno, a dice roll or something. Most of the time it is between 4 and 5. Upload is… bad. 1MBit or so. I don’t even check.
MAYBE I can get 16MBit down and 2 up by the end of the year. They told me they are working on it.

I often lose power here in Canada, so there’s that! My download speeds don’t tend to survive a decent wind-storm and a good sized tree, that’s for sure.

So my perception is definitely a first world problem… 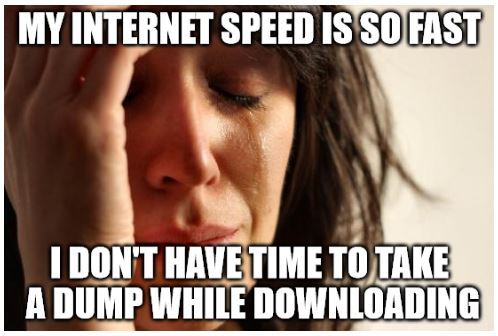 you are good for server setup with that speeds

I am 5Mbps up and 1Mbps down wireless, but its shared thats the problem, looking for double that speeds

Mine is a 40MB down and 10 MB up package I switched to once Optic Fibre was available here about two year ago and this is what i get, ping is normally better though.

Upload speeds have been very intermittent lately - during the test the needle was very spiky - but the download speed is pretty consistent.

Cable modem. Will be upgrading to fiber in the new house.

Ya know EinsteinEP, with speeds similar to ours, thats all anyone would realistically need I suppose for home use? any game updates I need are quick the little online gaming I’ve done has been fine, my ping is poorer than normal in my result because its defaulted to Newcastle, another country away, I chose Aberdeen in Scotland UK that is nearest me and I normally get much better pings from there.

Wow, to think I started off on dial up too and getting a constant 3.5kbs download was considered good, these are good times we live in

Faster is always better though, not sure if we’ll ever get any faster in my lifetime where I live though, not been keeping up on Internet tech much these days.

You guys know the difference between a bit and a byte, don’t you?

My speed measured in MB (Megabyte)

Good speeds, looks like you have the record so far

I think he’s just pointing out the difference between measurement units between transfer speed and size. As in, Mb stands for ‘mega bit’ while MB mean ‘mega byte’ (with 8 bits being in a byte).

Network speeds are usually measured in megabits per second, mainly as a historical reason that networks existed before the internet. When we had 2400 bits per second (bps) modems it was a good unit to use. It was also the case that the term ‘bytes’ came after the network was common, or rather a byte (and therefore megabyte) always being 8 bits wasn’t always the case (PDP had 18 bit words, 7 bit transfer etc, so megabytes or bytes per second was ambiguous). The confusion is often because files are measured in megabytes (1024 bytes) and things like Windows show network activity in megabytes per second i.e. MB/s.

So we have the case where the speedtests give megabits and what we really want is megabytes per second. @Sryan was pointing out that your speed is about 5 MB per second, as that’s analogous to 40 megabits per second.

I’m sorry. @fearlessfrog is totally right. I did two tests. one in MegaByte mode and one in Megabit mode. However as I changed the settings the website apperently also changed my image before mudspike.com snapshotted it and saved it on their own website. So that part of the confusion is my mistake. I did another one in Megabyte but this one is from my laptop, wich is on wireless, so a hell of a lot slower.

In order to change speedtest.net from Mb to MB you gotta go to Settings on the top-right. Then scroll down and change megabit to megabyte.

I wanted to let you know this @katana1000s as not every consumer knows this.

The WLAN fluctuates a bit. But if you divide the numbers in my previous test ( wich where bits) by 8 you roughly get the numbers from my current test. Wich is in Bytes (an actually useful unit IMO)

. The joys of living out in the country I guess. I’m on a WISP service. Better than dial-up or satellite though. There is a lot of development going on in this area, so maybe one day cable will become available. I’m not holding my breath though. 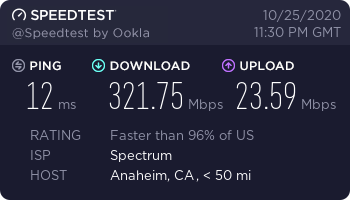 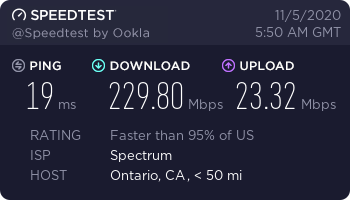 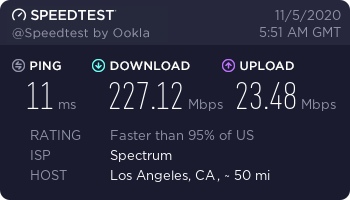 Heck of a drop in just 5 days…

The drop was not as bad with the Anaheim server.
Web: Speedtest by Ookla - The Global Broadband Speed Test
Image: https://www.speedtest.net/result/10366610714.png 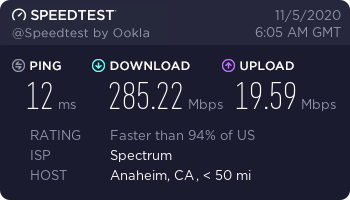 On the wifi with the wife streaming something, and everyone and their brother telecommuting or virtual schooling in my neighborhood.