What was the last good Vietnam air war sim?

I was digging through my steam games, and piles of old CD/DVD’s looking for a good Vietnam flight sim. Honestly SF2 is the most recent I’m seeing in my collection. Does anyone have any other recommendations?

Will that run in Win10? I thought it only worked with SF1, which had issues with 64 bit OS’s.

I haven’t been able to. Would be awesome if someone cracks that one.

Yeah know it might be worth it to build a Win7 box just for that.

“Jane’s USAF” had some pretty nice Vietnam missions in the F-105.

What a strange coincidence. I was just talking about [email protected]’s SE Asia package - Vietnam circa-1968 -ish. A Mudspike link to the package here.

The Southeast Asia pack is a new major extension for [email protected] covering Laos, Vietnam, Thailand and Cambodia. Most airports and lima sites have been realistically modelized according to historical data to reproduce their unique 70s look along with plenty of other strategic sites such as bridges, harbours, factories, army camps,… All in all, more than 50 detailled airbases are part of this pack and every single strategic site can be destroyed with any [email protected] waeapons! A campaign compos…

I developed the Haiphong Harbor/CityAirbases and the Cam Rahn Bay port facilities. Haiphong is pretty accurate as I found a good US military map on line from 1968 and was able to rectify it to to ADE to use as the underlying image of the area. CRB was a bit more speculative but is a good “feel” for the area at the time.

Definitely a sandbox vs campaign or mission oriented. The MILVIZ F-4E and/or F-100 for TACPACK are really must have’s for this package. (RAZBAM put out a TACPACK A-7 just before went all DCS…cal it an early Beta…but it does work…I’m not sure you can get it…eBay?) The F-4E can “double” for a Navy F-4J so you can do Yankee Station stuff.

Hmmmm…can not reach the [email protected] server…and last Facebook post is a year old…are they gone the way of the buffalo?

EDIT: Evidently yes they have, as of last year. But the base packages, are still available for download over at the VRS TACPACK forum.

I had looked into that, as I have one of the RAZBAM A-7 packs. As noted they have left the building, as I don’t have TACPACK it was a non-starter for me. I held off on TACPACK, as I figured a replacement for FSX was coming eventually. Yeah looks like I was wrong in that front lol.

Good Times for me in that Jane’s USAF F-105. I could not believe the power that thing had. What a rush.
I have always wished for a Vietnam scenario in DCS. I fly MiG-15/21 vs Phantoms and A-4s. Its a lot of fun. We really need a map.

Well…a replacement did sort of come out in P3D…sot of.

TACPACK is good but not great. I really do not like the VRS Superbug but do like the MILVIZ F-86, F-100 and F-4E. So with TACPACK I can “go places” where DCS does not go…yet. So if one gets tired of the PG, Normandy, Caucuses…

As mentioned I helped with the SE Asia Package. I also started building a [email protected] a Fulda Gap 1970s package and laid the ground work for a Vestfjord/North Cape/Kola package, before I went off to other things. If I ever finish one, I’ll let everybody know.

Well for the moment this will do. It actually captures a lot of the tension of planning the mission, and trying to adjust things on the fly. Just no actual flying obviously. The VASSAL module for sale on DVG’s website is regular Phantom Leader, not the deluxe version. Additionally there is an error in the VASSAL programming that breaks 4 of the 6 campaigns. You can still play the campaigns you’ll just have to do extra work that ought to be automated. As side note DVG responded to my question about the module being broken, by responding that the author no longer worked for them. 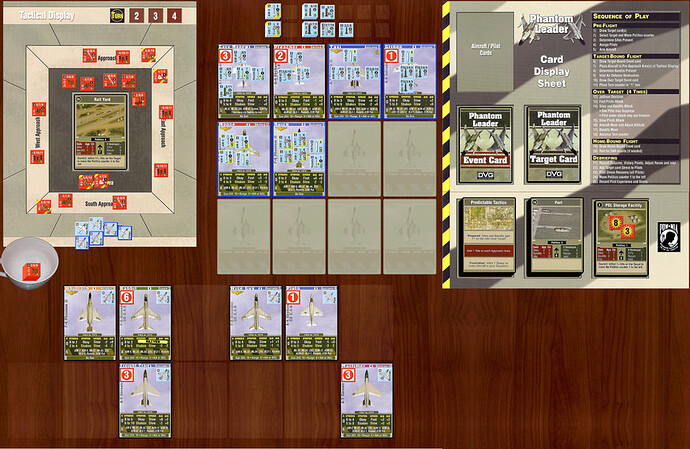 Here we have a raid planned for heading Downtown to Hanoi. It was that or the harbor in Haiphong. Fire or frying pan, why not go fire? Our strike package is coming from the South to get one additional turn to knock down that SA-2 in the far North approach area. Overall we’re facing 3 SA-2’s, 2 Mig-17’s, 1 Mig-19, and 2 Mig-21’s. Oh and a bunch of AAA! The M-1939 in the center area is flak in the big fluffy cloud of death manner, and capable of knocking down AC even at high altitude (the two altitude options are high and low). Everything else is low level, so the plan is to stay high, hopefully we can knock out the SA-2’s with our Shrikes.

This is going to be interesting.

…it has been released!!! Must get to PayPal NOW!!!