Cool. You have a tiller on two sides or just the left seat? Yeah…noticed your little duck under there at the end. If I were following you in my dinky airplanes I’d be flying that glideslope a dot high to be over your wake. Neat to see your Vref airspeed 145-150 and the white tick on your AOA pretty much locked on. And yeah, 170 to the FAF is pretty much the norm in most international airports. Which is hilarious because the FAA busted one of our guys a few years back for being “non stabilized” because he was Vapp + 20 outside the marker (in a real aircraft). If the FAA busted me for that I’d fly the rest of my career at Vref +10 and tell every controller the name of the FAA guy that told me to do it…lol…

You have a tiller on two sides or just the left seat?

Tiller is only on the left side and so is ABS system. So if right seat is landing, braking is done by the left seat.

Vref airspeed 145-150 and the white tick on your AOA pretty much locked on.

IIRC that approach - our ideal speed for flaps 40 was 147. I (we as community) don’t use AOA, ( just reference to it) during approach because sadly system is not maintained well and can be +/- quite a bit from pilots and copilots side.

Which is hilarious because the FAA busted one of our guys a few years back for being “non stabilized” because he was Vapp + 20 outside the marker (in a real aircraft).

Thanks. I was trying to get a sweet spot to get instruments and outside.

How the heck would FAA know your approach speed?

It was an in the aircraft checkride - the FAA guy was checking the check airman, so basically he’s sitting on the “jumpseat” as it were, watching our checkairman give the checkride. He thought the plane was being flown too fast outside the FAF on the last approach into Charlotte, so he implied that the checkairman should fail the pilot, and he did. I guess it was one of those things where you have to choose your battles…but as you know, the controllers aren’t going to be really loving you if you are out there doing Vapp running around their airspace.

That seems odd. Sounds like there might’ve been more to the story. I wouldn’t say Vref + 10 is unstable especially before FAF. But I don’t deal with FAA much…

No…there really isn’t much more to the story. The problem in the FAA inspector’s mind wasn’t that Vref + 10 was unstable, but rather Vref + 70 outside of the marker was. The controllers regularly ask us to maintain 170 until the FAF. Our Citation Vref speed is anywhere from 96 to 107. So yes, it is way over Vref + 10, but it isn’t unsafe, nor unstabilized. At the marker you throw the gear, add the landing flaps and slow down…but you certainly don’t slow down to Vref + 10 or every American Airlines flight on final is going to go around. Fly as you train, train as you fly works to a large extent, but not in this situation. Sure, in a simulator, where sending 767s around behind you isn’t costing anyone any money, Vref+10 at the marker is fine and dandy. Giving line checks, you sorta have to slot yourself into the flow of reality as well. I thought the recommendation to fail the guy based on that was bogus, and it wasn’t the culmination of a bunch of other bad mistakes on the checkride, it was just one moment in time that was operationally normal. I thought it was unreasonable and had it happened to me, I would have had a lot to say about it. There are lots of good reasons to ding somebody on a checkride, and they aren’t hard to find, but that one was Mickey Mouse all the way.

Out of curiosity, I looked up the data for my last approach two days ago in our Citation into Charlotte…here it is - 170 to the marker, then continuous slowing to 134 (which would be about Vref + 30) until the last ping at about 700’ AGL (2 mile final) and I’m positive I was no more than Vref + 10 crossing the fence.

It’s interesting to compare it to typical airline arrivals…they look pretty much the same 170 at the marker, continuous slowing throughout the remainder of the approach until settling a bit above Vref before the data ends…here is a Southwest 737 tonight landing at CLT…

And an A321…you can pretty much see the pattern…

Obviously the lighter GA stuff won’t show the same pattern, but the wheels of ATC depend on the regularity of all the rest of us. Heck even the Dash 8s go fast…lol…I love the last ping though 116 knots. They can slow down fast…

We began tilting up and unwrapping tanks this week. 4 down and 6 more to go. Even though the big ones weigh 5 tons when full, a single person can move an empty one around with a pallet jack. When they are laying down in their cradles, you need a forklift to move one. Tilting takes some time as we don’t have much clearance. Total damage for the week: 2 x fluorescent light bulbs.

From our security camera a view of the rigging. So, we bought the boom from our forklift sales person for $1900, whom said that he got it at auction. Then found it on Amazon for $1200. Such is the plight of the uninformed consumer. 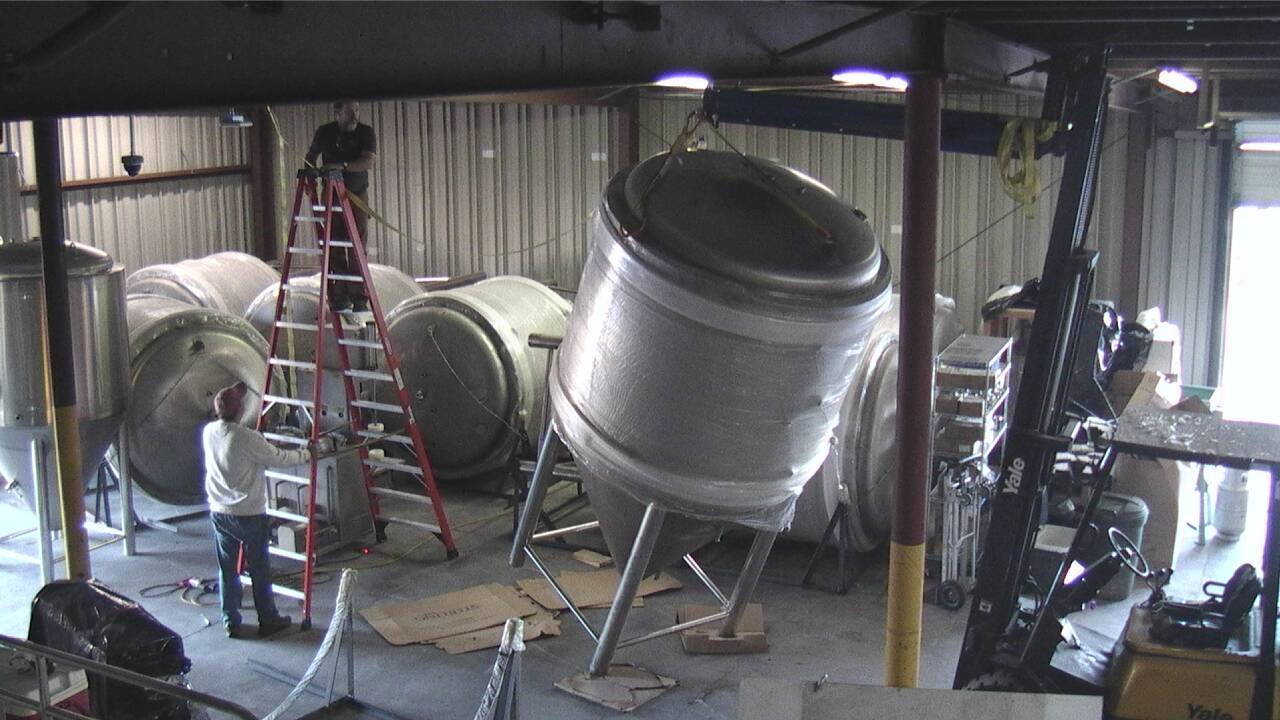 Thats one hell of a home brew kit

A good rule of thumb to remember should you ever need suppository while there…
“Bring them from home.”

Pretty typical Dutch view after a run, walking back home.

Is that an HDR photo? Cool.

So many cables you have

See anything interesting down there…?

Nice. May I assume Pacific with the wet suit?

My wife and I took the kids for a Disney cruise this week out of Port Canaveral. A 5 day Western Caribbean affair. Was a blast but feel like I’ve had Thanksgiving dinner every day for a week. I did manage to work out twice and run a 5K on their Castaway Cay island, so was not a total loss.

Arrival in Nassau. From left to right, 2 x Carnival boats, the Disney Wonder, and Empress of the Seas. We were told that it was rare for 2 of the 4 Disney ships to be in port together. The crews very much enjoy visiting their Disney ocean going colleagues while docked.

Caught this from our state room veranda. The Wonder leaves about an hour ahead of us and near sunset. Q for sea going types: what are the extensions of the bridge called, if they have a name?

The only picture that I found on my phone of my wife and I heading to the pirate party on 11 deck. Was a great time but the martinis did their damage, ARGGGHHH. Funny, we passed one of the officers on the way, and he asked if we were going to try to take the ship. I replied that there were probably enough pirates on board to carry this out, but that at this point we were too inebriated to get properly organized.

Our daughters heading out to meet their idols, the Disney princesses. They look harmless, but can kick ass when they assault as a team. Apparently Eliza tackled Snow White to the deck in a frenzied moment.

May I assume Pacific with the wet suit?

South Japan. Water was warmer than outside temp.

extensions of the bridge called

I think they are wing bridges (?) - nope bridge wings…LOL…