Being new here I thought I’d try to get to know you all by posting a fun question. When watching films or TV shows I’m always getting told off by my missus for pointing out all the annoying issues in flying scenes.

Tell us your worst.

Over time I’ve come to the conclusion that Hollywood think’s we’re all simpletons.

That scene in the movie about the shot down pilot escaping from yugoslavia (behind enemy lines) where the SAM keeps tailing the F/A-18 through various maneouvres and with an overtake of about 4 knots before blowing it out of the sky. That was pretty dang horrible.

Welcome to the spike, and off to a great start @Chaders!

Well, I am sure many DCS pilots feel like this is what happens to them all the time! It’s emotional realism!

That was pretty dang horrible.

Indeed it was.
But that movie also got one of the better aviation scenes.

But, wasn’t this thread about the worst aviation scenes…?
Hm? I guess I’m off topic…

Indeed it was.
But that movie also got one of the better aviation scenes.

That is a good scene and a great soundtrack.

But that movie also got one of the better aviation scenes.

There’s a sneaky Tomcat shot in that vid

ahah I was about to post that one but after rewatching it I think it’s actually not that bad.
No CGI, all practical effect.
Now, the rest of the movie is another story

I admit I thought ol’ @eightball had started smoking his socks there for a moment.

But you are absolutely correct!

Is that in the movie, or did someone edit it in the youtube vid?

Maybe ths is a horrible aviation scene, after all…!

One of the most annoying aspects for me is, and in depictions of Jet Aircraft especially is … they are close to enemy jet and in comfortable gun range, but still always insist on slamming throttle from idle position to full power anyway … WTF and why?

I’m sure Top Gun 2 will do this a lot too, Original Top Gun and others did it … If I did this to my TM throttle it would likely break, its not designed for slamming from idle to to AB as fast as you can

On the WH you can throw it forward, not much trouble. I’ve even done a full burner to idle, speedbrake, full aft stick maneuver to throw off a hungry F-15C - in one of our fly-ins!

Okay it is the entire film not just a scene - but feel free to watch it again.

I mean, I’ll watch it, but I’ll be slightly angry while I’m doing it.

So much talent and potential. So terribly wasted.

getting bounced by free wheeling sinister 109s appearing out of nowhere like demons. Sorry to sound like a broken record. I just think that it was an opportunity lost.

The absolute worst scene from the movies for me ever is the original TopGun movie, the encounter with the Mig 28 … The top down F14 finger up salute is an amazing movie cheer moment, but its ludicrous, no way could it work, its OTT and unrealistic too, just nonsense.

Engines speed up that fast in real life, surely not

No, i like to keep it real as possible and know if I do try to slam my TM throttles from idle to max power possible as fast as I can, its not going to be the most fulfilling moment.

@EightBall & @Troll - thanks guys, I now had to nit pick and totally throw the rest of those scenes under the bus. So here we go.

First of all - they are carrying inert AIM-9 sidewinder missiles into an active AO, hence the blue bodies.

As we get to the Cat we can see we have no centerline drop tank and our jet is #106. 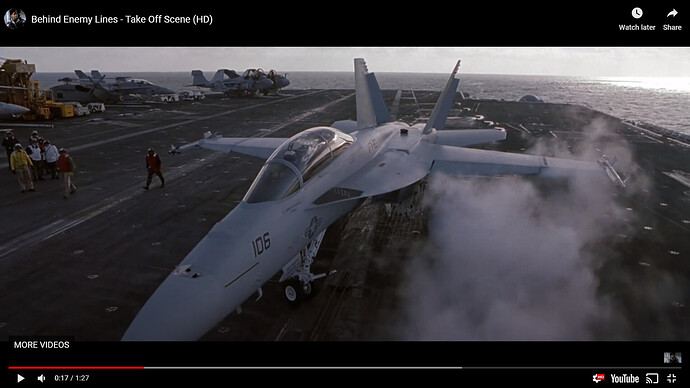 A moment later we can see that there is nothing on the other cheek station - we have no targeting pod. So what are we using for this photo recon exactly? The nose mounted cameras leave a bulge on the underside that is also absent. 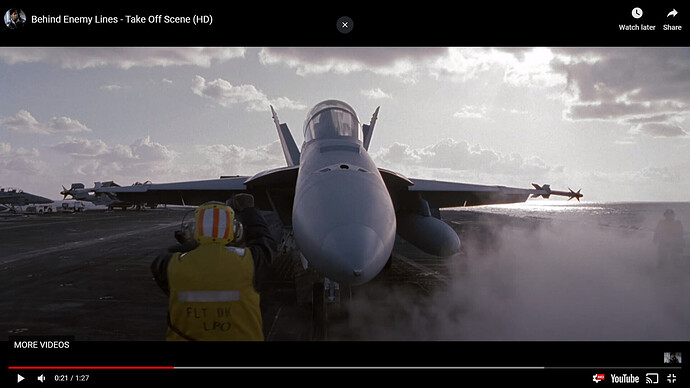 As we launch, we spontaneously acquire a centerline drop tank. 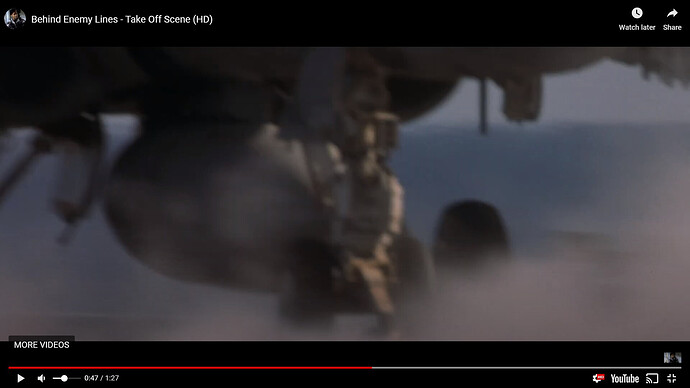 And as we leave the deck we appear to have a cheek mounted pod, perhaps? Our jet is magically number 201 now. 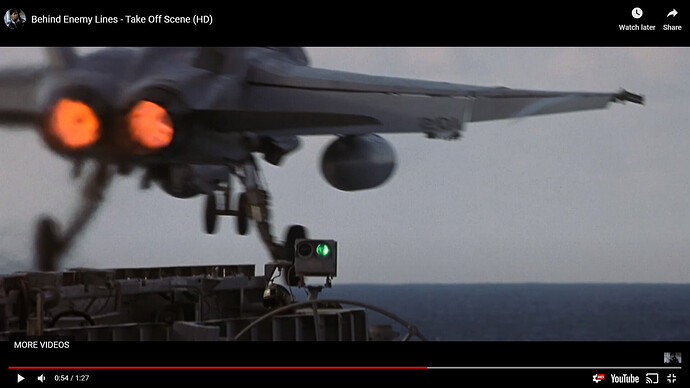 In the SAM chase we are down to two tanks and clean with our dummy missiles again. 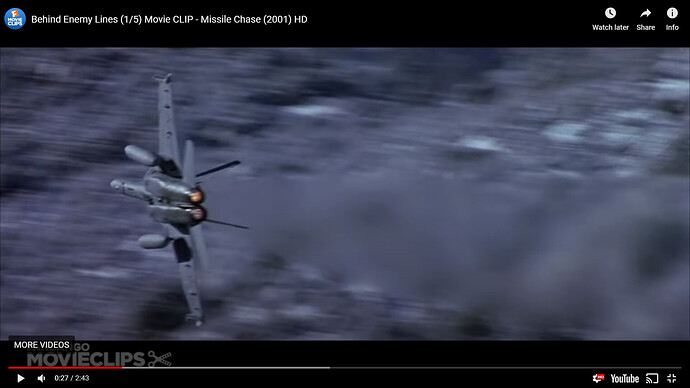 Then when we drop the tanks, one impacts the snow while we are shown the other hits the road with a small bounce and otherwise slides along…next shot there is perhaps our magical third drop tank re-appearing soaring through the air and exploding into a fireball. 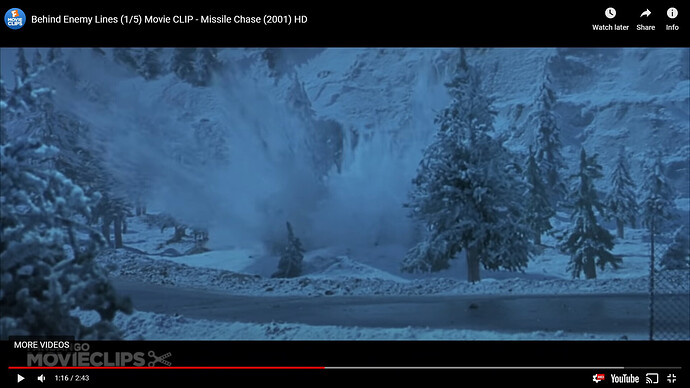 Grrrrr I nearly had you

Grrrrr I nearly had you