Yeah…so, driving home from work yesterday I encountered one of those wonderful Florida storms. Probably 2" of rain in 20 minutes or something.

I encountered the only plane I hate…hydroplane. My Honda lost traction on the highway and I went for a brief but fast clockwise ride of about 450 degrees that crushed the nose and deployed multiple airbags. Full brakes and the car never slowed and I never even felt the ABS vibration kick in, guess I was on a cushion of water.

Didn’t hit anything but the guardrail (THAT was bent hard) and other than a couple of sore spots from the seat belt all that happened to me was an airbag burn on my left upper arm. My less than 3 yr old Pilot is likely totaled, though.

So I worked from home today after picking over the carcass of my Honda for usable items and getting a rental car, and I’m looking out the window right now at another similar storm coming in at the exact same time of day. Glad I’m not driving in this one.

Really pissed at myself for not being able to prevent this.

The kicker…it was also my 20th wedding anniversary. “Hey, honey, happy anniversary…guess what?”

Oh man…that’s no fun…and a sick feeling when it happens. I’ve hydroplaned plenty of times, but haven’t had the misfortune of doing 360s or more. I hope you spun it the right way though…

“Happy Anniversary Honey…we should rejoice that I lived to see it…!”

Sheeee-it dude, that’s a bad day. Be happy tho it wasn’t a worse day. With a little less luck and a little less skill in your driving and Honda’s engineers it might well have been.

I had a similar experience a couple of years ago, but with a case of severe icing on the road. I did a 360 on the highway and got rammed by the car behind me that couldn’t brake either. My front bumper was a complete waste but I was in one piece, shaken and legit scared. I found that an event like this makes you appreciate the smaller things in life even more.

Glad you’re ok though!
I have totalled two cars. Both rentals.
Both on ice… Rolled the first one, actually. My bad! Should’ve respected the «No Aerobatics» restriction.

The other one I managed to stop and avoid hitting the two cars in the accident ahead. The driver of the car behind me was not as lucky…

Hey Jedi, I want to tell you that I am very glad you are ok. That is the most important thing. I was in a bad car accident a few years ago, got T-boned on the driver side, and it could have gone a different way for me. I still whinge a bit in fast traffic sometimes from the experience so I know what it is like. But if you can sit at home and reflect on it then that is the only important take away.

There will be other cars. They are making them as we speak. It sucks and sometimes it’s hard to see it, but the result was a good one.

Yes, glad you are OK!

Wrecking Crew just HAD to offer support. No irony there.

Of course, glad you are OK.

Very glad to hear that you are ok. There is nothing worse than that feeling when you suddenly realize that you are no longer in complete control of the vehicle.

Btw, Happy Anniversary! My wife and I hit 20 years this coming January too.

Hey @JediMaster, I’m really sorry about that but at least you walked away on your legs.

I had the capacity of driving my car through a wall so… Yeah. You can say it happens to everyone.

Ouch mate. You got out of it alive. Thats what is important

We had a florida style rainburst yesterday. I went from 70 to 20 MPH and still the fastest wiper settings could not clear the screen. It was scary. Glad your safe though

I should have videoed my landing in Orlando yesterday. The wipers on the 737 completely suck. Fortunately wet runways make all landings great.

Glad you are OK, @JediMaster
About the car… yeah that sucks. I hope you find a good and affordable substitute.

Yeah, the car is a real downer. I still really liked that car. Even when I would eventually get tired of it, I was going to have a good trade in.
Not now.

From the insurance claims guy to the wrecker guy to the woman at the impound lot and the officer who kept me dry at the scene while I waited for the wrecker, everyone seems to think the car is totaled. The steering wheel and left side curtain airbags all deployed, and they said that’s usually sufficient because of the high cost to replace. Then there’s the front… The engine still ran, they drove it onto the flatbed, but he said the steering was all messed up.

Here are pics I took after the rain abated, but it was still quite windy. You can see the right lane, where I had the mishap, is still oddly shiny with water while the other 2 are much drier. I think that lane was repaved/sealed more recently and probably a contributing factor.

Yes, this is going uphill on an overpass. 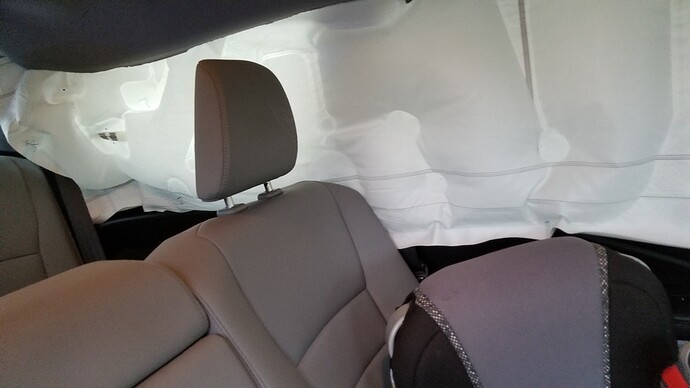 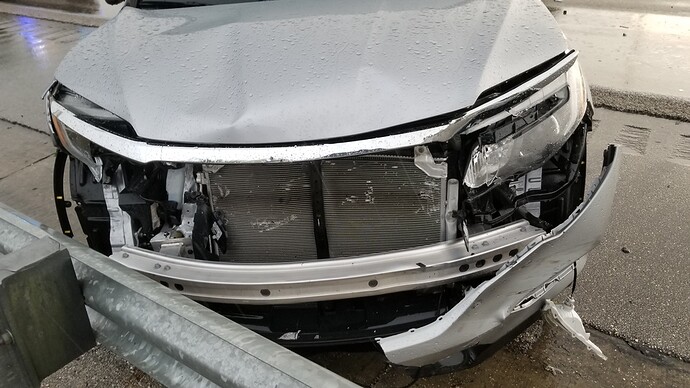 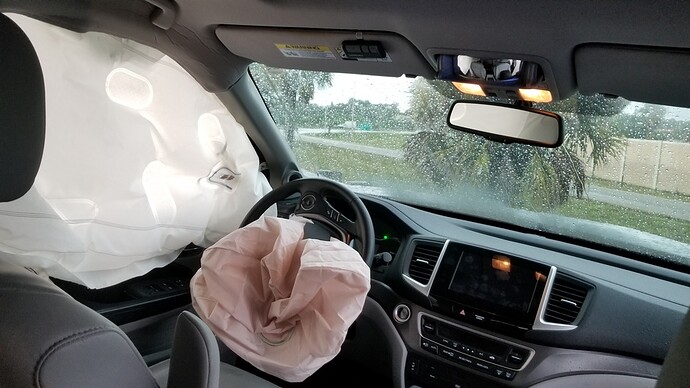 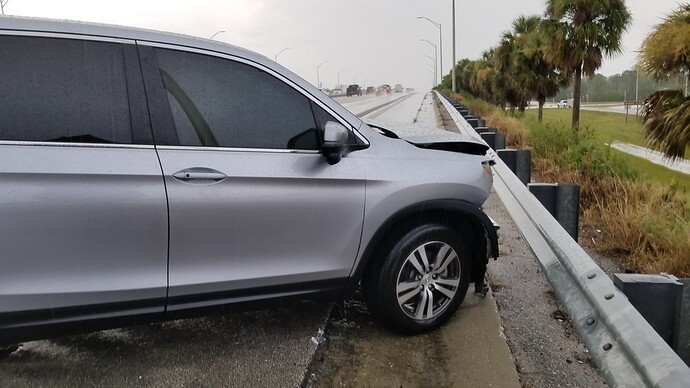 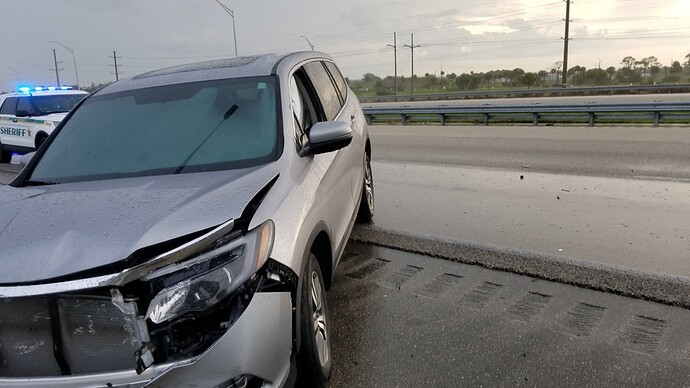 Even if it sucks right now, cars can be replaced, at least you’re still in one piece.

Glad you made it relatively unscathed,Could of been much.much worse.

So time to shop for a car!

What are you looking to get?

Oooh boy, is that a car seat in there? Did the airbags dislodge it?

I took a wet roundabout in Guam one time in my old XJ. Lost control and spun 90 degrees before sliding into the berm at the edge of the road… all at about 1 MPH. It took over 10 seconds. My buddy and I couldn’t do anything but just laugh as we slid sideways, no control over the Jeep at all. Love tapped the berm, checked the mirrors and drove off.

Glad you’re relatively unscathed. Situations like that, it’s a blessing when the only thing we hurt is our pride.