WW2 Flight Sims and the PTO

DCS is making a resurgence, but IL2 is still far out in front of the WW2 arena. IMO

Who ever makes a pacific theatre will nail the coffin closed on this generation of WW2 sims.

Neither series has made a real push for it, what is the reasoning behind this? Are the Japanese planes hard to find info on? Is there not as much interest as I think there is in the PTO?

Seems to me a Midway map with corresponding aircraft would be a first ballot hall of famer.

The sheer expanse of water doesn’t seem that interesting a sell, I suppose. Of course, smaller-ish maps with focal areas would work.

I think DCS if anything would be waiting on improved carrier and damage modeling, plus more work in the WWII area like AAA, FlaK, ships, other ground units etc.

The DCS AI also needs a tweak for WWII planes.

Magnitude is working on an F4U-1D for DCS 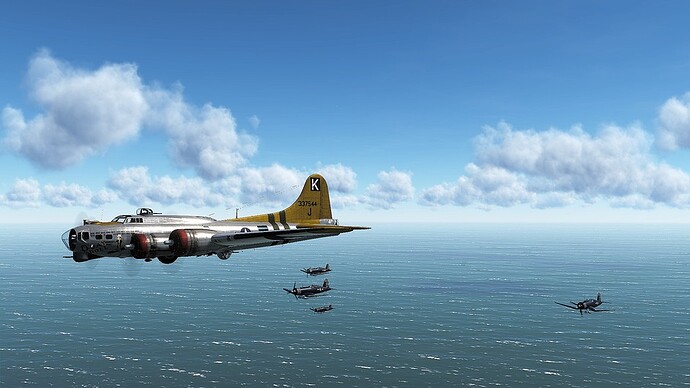 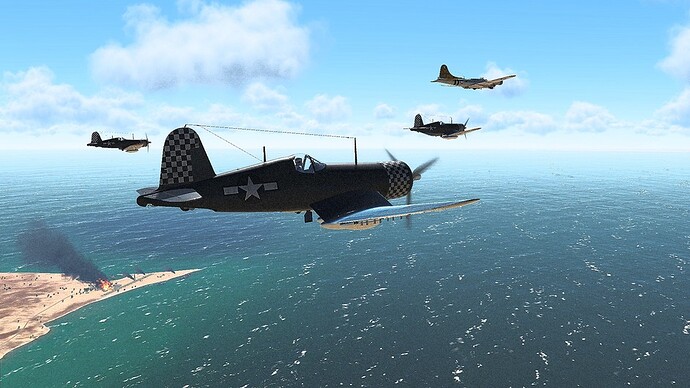 I think they also wanted to do a PTO map, I think the most recent rumours were that the locale would be centered around Iwo Jima. The images are recent and the Corsair was mentioned in the spring development update, although the announcement dates back to the Leatherneck days.

Obviously you’d have to pick a certain batte given the expanse of the ocean, but doesn’t IL2: Battle of Midway/P.I./Okinawa/Iwo Jima just seem like a home run? Fits the model of a focused map, 7-8 planes, and leaves room for lots of creativity on mission making.

On the DCS side the Corsair looks sweet, and IF they fully invested in a PTO, I’d be in. But like I said, they are pretty far behind right now in terms of damage modeling, number of planes, assets, players etc. there would have to be a substantial buy in from other 3rd parties to make the new planes and it seems only the Corsair is in works unless I missed one.

Jason, il2 BoX producer, really wants to do pacific il2 but he can’t. There is not enough money to pay for competent translation of wartime Japanese documents.

They were planning to do it after Kuban, but there just wasn’t enough data/capital to get the data. So they did bodenplatte. Smart move, preparing assets for Pacific such as english voices, and making a ton of money hopefully.

Never forget Basilone, one of my heroes.

Some many famous battles to portray, amazing that the area gets passed over so often.

If it were easy it would already have been done. If you have or know of sources, there’s a call for assistance thread over on the il2 official forum.

I remember when Pacific Fighters for IL2 was a thing (even got in on the beta) and all the challenges they had making that work out. For them, the problem turned out to be one of licensing: a bunch of the American aircraft ended up in lawyer hell because some modern defense companies owned the rights to the aircraft. Lawyers came knocking on Ubi and 1C’s doors, a real mess went down (1C believed Ubi was responsible for handling the licensing) and Pacific Fighters ended up shipping with less than the planned aircraft, missing several significant ones.

Seems to be par for the course whenever the WW2 Pacific theater comes up.

Now that sounds more believable to me if there is licensing issues. Found this museum which has the only air worthy A6M in the world.

Would be a good module to test the water in. Pretty sure people would eat up a Zero even without a map.

If you told me a decade ago+ that I still wouldn’t have seen the PTO in any sims I flew I would have saved myself a lot of money on equipment and modules/games.

Museums don’t give away those documents for free since they are a source of revenue.

I volunteer at Planes of Fame and there is strict no photos rule about volunteers photographing cockpits and other “hidden” areas. They WILL let someone photograph those areas for a fee which from what I hear is a wee bit on the steep side. Somewhere I read a post by Jason saying it was going to cost him a million bucks for the Zero alone. I don’t remember what all that cost entailed. Multiply that by however many aircraft you want to see in a Pacific module and see how fast things start to add up. Some will be more and some will be less but I bet it ends up averaging around that number. That will give you an upfront cost he is going to have to expend before he even sells one copy. Then try and figure out how many modules he has to sell before he just breaks even on the project, let alone makes a profit.

If I recall correctly, I think it was also stated that an “all water” map would actually have a lot of issues in DCS. Likely an nearly all water map would too.

We do need a Zero for our upcoming Corsair, can’t argue that!

I understand there is a lot of cost involved in making these, time also. I wasn’t trying to imply it would be cheap or easy. I would imagine any module wouldn’t come cheaply.

But given the interest and lack of competitor, if there was ever a module that would turn a profit, I would imagine PTO would be the one.

Let’s just say it takes you a million dollars for the zero. Your break even would be about 17k purchases at $60. Doesn’t seem to improbable, especially for a company with already established revenue stream like DCS or IL2.

Il-2 doesn’t sell planes for $60, they’re $20. When part of a full title, they have 8 planes plus at least one map. So triple or quadruple the number of sales along with what it costs to do the other Japanese planes you’d need for a Pac title.

DCS has that price point, yes, but they have nothing else Pacific. No WWII Pac ships, no maps, no AI planes/units. So there’s a lot more to be done there.

Then there’s good WWII carrier ops, last seen in il-2: 46 and otherwise only done for Aces of the Pacific, CFS2, and 1942: Pac Air War. Frankly, I didn’t enjoy the carrier ops in 46 all that much, I preferred it in the 90s titles mores. The inset LSO with paddles in PAW (or was it AotP?) was great.

I really want a PTO for Il-2, not DCS, and it bums me out that it costs so much for this stuff, especially as so much of it goes under the radar of most of the customers.

In other words, he could probably spend a quarter of that for info that would make a Zero that would be good enough for 90% of the users.

Didn’t 777 state somewhere that the Pacific was put on a back burner while Flying Circus was in the works? I am vague on the recollection but I also thought I read that Jason was a fan of the Pacific. DCS seems a little ahead of the game in terms of modelling water, waves and boats. If I were them, I’d turn my focus away from the Channel and work on that. A better and more dynamic weather model is needed, IMO.

If Il-2: PTO doesn’t happen, I’ll be irritated. I’ve bought BoK, BoBp and FC with the implied understanding that they’d make PTO with ongoing revenue even if it took a few years. Korea would also be pretty great, but Pacific Fighters was the highlight of Il-2 for me and I’m really looking forward to flying an Avenger this time

Years ago, and I mean years, as in before the Il-2 project and maybe even before RoF, memory unclear on that, Jason talked about making a P-47 PTO sim. Granted no carrier ops in that, but he seemed very interested in that particular combination.

I have no doubt he wants the PTO. Making the P-47 for Bodenplatte gets it out of the way, along with the P-38 and some other Allied planes. Making Pacific terrain is no different from any other terrain. The big issues are carrier ops and Japanese planes. If the carriers can be developed for the Atlantic (or Med), then he’s got that part done, and then the only hurdle is Japanese aircraft.

I am guessing but still willing to wager that the Japanese planes (or at least photos and data) will be accessible enough to model. The Japanese fanbase for the old IL2 seemed high. And the resurgence of Japanese national pride mirrors that of the Russians. Somewhere in there I see a crossroads that makes finding a 3rd party developer highly possible, maybe not for the more obscure stuff, but at least the Zero and the Frank.

Just writing that really makes me miss the old IL2 multiplayer. What a great time that was.