Can I get your permission to try XP 11 native VR instead of going to the in-laws for dinner?

That would be… unwise.

1- They’re just inlaws.
2- This isn’t fun and games for you. Its your job. The wife will probably understand.

Permission granted. I take no responsibility for any negative consequence which may result from my questionable advice.

instead of going to the in-laws for dinner

Surely, they would understand…?

I’ve had the best results doing the following:

So my environment is the Oculus Home version 1 (not the beta v2), the Steam VR Beta Channel and up to date Nvidia drivers.

The Microlight is especially good. Here’s my X-Plane settings for reference.

Thanks fearless. Waiting for my in-laws to go to bed. Unlike @BeachAV8R, mine have shacked up with us for the week. I guess that I could lock myself in the home office and go under the hood.

Other non-obvious things that I did wrong for quite a while, so wanted to share:

So far so good. It shows great potential. I landed a 737 in a quick loop around YVR (got family here too) and I don’t think I’ve ever found it so natural, as in hand on yoke, hand on throttle levers on approach. Seemed so much easier and natural…

So far so good. It shows great potential. I landed a 737 in a quick loop around YVR (got family here too) and I don’t think I’ve ever found it so natural, as in hand on yoke, hand on throttle levers on approach.

Wow…that’s a great endorsement…! Can’t wait to try it. I should be able to tomorrow (taking my VR rig on the road!)…

Would you recommend using that Oculus tray tool for every tweak over the debugging tool in the Rift software? I sometimes feel it only works some of the time depending on it’s mood particularly the ASW change.

New to Rift, only had it a week. Thanks.

For ASW on/off the tray tool should be calling the same API as the Debugging tool. Sometimes a game will need to be restarted if you change a setting in either though. I keep the Tray tool around as I use the power options for the fresco power management bits, as I have a PCIe USB board that needs it.

Thanks for the reply.
Is there a particular order to make changes eg, open debugging thingy and make the adjustment, open the rift app, launch dcs and voila?
Reason I asked is because it seems hit or miss sometimes whether it works or not. Maybe I am not consistent or just thick

I’ve not noticed any inconsistency with the Tray Tool, so my order is pretty much this:

I don’t bother with the View/Add Profiles and tend to do pixel density or super sampling in game if I can (as that tends to be saved in the games config rather than me having to remember it).

For the hit or miss, do you run DCS as ‘admin’? I wonder if sometimes it’s not a permissions thing?

I’ll check all that next time I run dcs, away from it all just now.

Hmm…I cannot seem to get the checkbox to show up in my X-Plane menus to enable VR. I have SteamVR installed, but I’m also not seeing X-Plane in my Oculus Menu as a foreign app…

Maybe I’m not on beta…standby…

Yep…I think that was it. Always Step #1 I miss…

Wow. Looks cool. It will take some tweaking to get my setup feeling good…but I like what I see so far. They’ve really put a lot of work and thought into the controller menus and functionality.

If you get ‘glitching’ looking around then see above in the thread for the ASW witchcraft tips.

Also, using the MCP on the 737 is a joy now, the twisting of things like the Speed knob just works really well. Really enjoying it, and don’t even mind having to ‘lean in’ to some of the displays that much (like Mr Magoo became a commercial pilot I guess). I’m pretty sure they’ve disabled Pixel Density / Super Sampling, so we just have to use 1.0 and put up with that for now. Just like the iPad map, I can see things like the FMS being a ‘pop-out’ holdable window. When that day happens, I think I’m going to uninstall poor ol FSX/Flyinside. 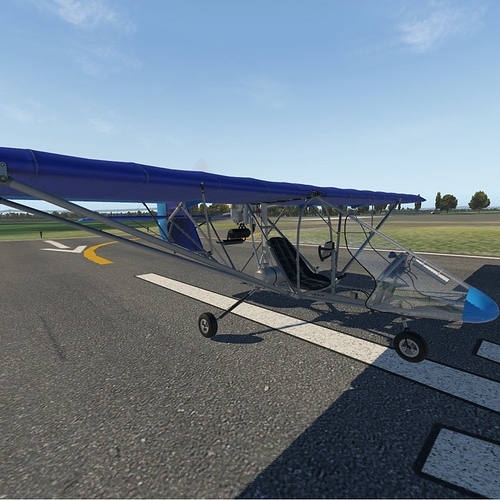 Most 3rd party aircraft don’t have a yoke hooked up, but the stock aircraft in this beta all do (maybe not the F-4).

Also, should say - if you don’t own XP then the demo version can have VR enabled. Just download it as normal, then opt-in to the Beta in the launcher, and it VR’s just fine. Good to get an idea of how (this very early) version will work on your system Try It - X-Plane.

On Oculus if you press click the thumb joystick down you enter ‘teleport move’ mode (sort of like a ‘throw arc line’ appears, with a circle where you will land). You can rotate your stick around to see which way you face, indicated by a red line on the circle. It is a really nice thing to go to ‘Circle View’ and then do an aircraft walk-around. The big jets really do feel big, and it’s nice to inspect the undercarrage, wings and generally have a look around the airport. Is going to be huge for scenery designers as you can effectively ‘get out of the aircraft’ at any time and move around. Cool.

I went for a walk around my Cessna to try this out and it’s brilliant, I was at Morlaix airport in France (my local) and I got carried away and ended up going for a walk around the area. What was really funny is I had so much traffic on the roads it was murder trying to cross the road. I was actually standing at the kerb waiting for a gap and jumping over the road

I really should grow up and concentrate more !