you guys are too late to the party, here you go 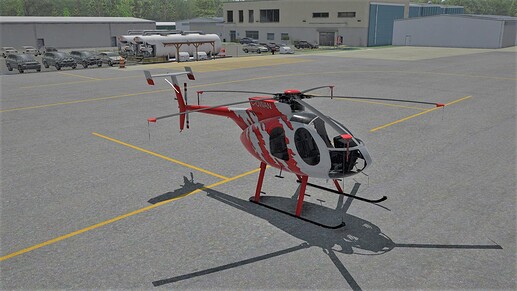 Not that the accusation has been made but just in case doubt exists, X-Plane is far from dead. I can hear a very fat woman singing in the distance something about Microsoft something or another. She keeps getting louder. And she’s big–really big. I haven’t seen her yet but I am imagining Jabba the Hut in a dress. Once she and her French entourage truly hit the stage with everything they’ve got, there just might not be room for anyone else. But that is tomorrow. Today there’s X-Plane. And now, taking his little corner of the stage is Mr. Cowan, some guy in Freeport, IL who had enough time on his hands to come from out of nowhere and release three very good helicopters: the Bell 222B, Bell 222UT and the MD 500E. The two Bells are basically the same machine but one has retractable wheels and a tiny fuel tank and the other has skids and plenty of fuel because all that extra gas can now go where the wheels once were.

I bought the wheeled version of the 222 and liked it. There was a discussion elsewhere on the forum about it and so there isn’t much more to say. I would like to share a few thoughts about the MD 500. Cowan hinted at it soon after he released the 222. A month or so later it was up for sale. To me this smacked of a cash grab and so I decided initially to give it a pass–especially with an already excellent 500D created with the assistance of “Brett_S” that’s available for free. Resistance is futile. I am $25 poorer and pretty happy. Cowan’s three helicopters, as I see them, are all beta. They need some visual (and in the case of the 500: aural) TLC to be placed confidently on the same high pedestal as DreamFoil’s B407 and VSKYLABS’ R66. But the effort put in thus far is clear to see and I feel fairly certain that updates will come which will make these machines shine.

He has already implemented some very creative details that make flying, especially in VR, easier. One handy feature is the ability to move your seated position as you like it and then save it as default. I’ve gotten pretty good at slewing with the move keys unseen but it is so much easier to not need to bother with that at all. How does the -500 fly? Pretty much just like Brett’s free -500. There are subtle differences and clearly Cowan’s model is no copy. I’d offer that both models are close because they are both fairly accurate. And X-Plane is doing it’s part by managing the math nicely and therefore both helicopters fly alike. So if it’s just curiosity that makes you wish to part with your money at the “dot org” store, I’ve just saved you $25. You’re welcome! But there’s more. And I can’t help with this one because photos and videos don’t do it justice: animated rain. Yes, rain. Cowan has modeled rain effects that curve so convincingly around that beautifully shaped plexiglass that I swear you can smell the ozone. The effect looks great in the 222. But the 500 has three times the surface area through which to appreciate the animation. It’s even fun to save the flight and replay it while sitting in the back. Is some pretty rain and a more refined cockpit worth $25? It was to me. 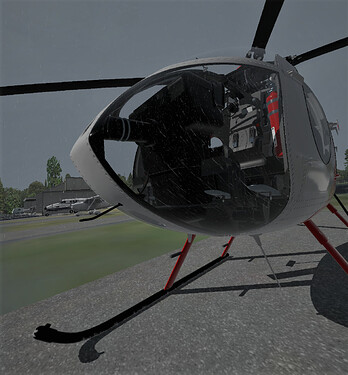 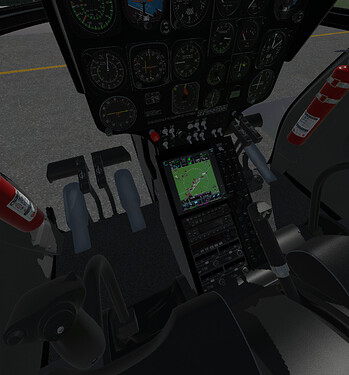 Nice…! And for all those that missed it in other threads - @smokinhole is currently taking helicopter flight lessons, so he is forming a nice base of knowledge on the feel of helicopter dynamics.

The -500 is a classic. Magnum Pi…Apocalypse Now…so many other films and TV shows. Great to see Cowansim with that release. Thanks for the impressions…!

So now that Cowan has taken us 40- and 50-somethings down bad-TV-memory-lane with Airwolf and Magnum PI, I figure MASH is next.

They need some visual (and in the case of the 500: aural) TLC to be placed confidently on the same high pedestal as DreamFoil’s B407 and VSKYLABS’ R66

I initially also hesitated… but only for few hours. Bought it right away as I anyway needed something to add next to my AH2 fleet.
Unfortunately didnt have the time to check it out yet.

Not that the accusation has been made but just in case doubt exists, X-Plane is far from dead. I can hear a very fat woman singing in the distance something about Microsoft something or another. She keeps getting louder. And she’s big–really big. I haven’t seen her yet but I am imagining Jabba the Hut in a dress. Once she and her French entourage truly hit the stage with everything they’ve got, there just might not be room for anyone else. But that is tomorrow. Today there’s X-Plane.

I think maybe, eventually, P3D might suffer but we’re a long way still from that. The reasons people chose XP11 vs P3D vs AFS2 etc will still remain even with the Redmondian Elephant stomping around. I think MSFS will bring a lot of new people into the hobby, even on the console side (spits into jar) but it might be a ‘raises all boats’ thing rather than scorched earth. 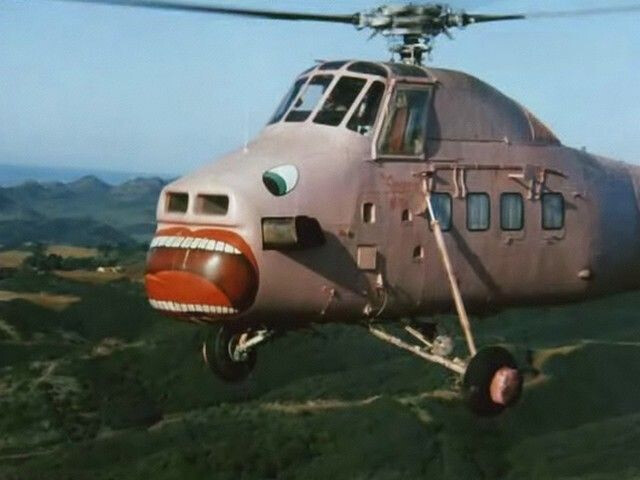 Yep. Definitely. I’m done with P3D. You know I’m done because I didn’t buy that awesome looking Bae146 that came out for it a month or so ago.

I am very interested to see where Austin goes with X-Plane given the massive visual experience that MSFS has brought. I love my X-Plane install right now…but it was a good bit of work to get it there. But I do really like the XP VR experience.

What is that? Why do I both weirdly remember this but can’t place it. Am I blocking out bad memories

I think XP11 should zag for every MSFS zig. Examples:

Use the bad or corp difficult things on the MSFS side as gaps for XP12 to fill and excel at.

Lol, allegedly the production company for that TV show was only renting the chopper for that series on the weekends, cheaper that way since they did not know how long the series would last, and they painted it without telling the construction company that owned it. They were none too pleased the first Monday it came back.

03-09-2020 Footage of Sikorsky S-58DT Landing at Whiteman Airport. Manufactured in 1962 and operated by Summit Helicopters Inc N9VY (cn 58-1519) Nicknamed the “Screaming Mimi” was used in the eighties TV series “Riptide” Thank you for watching & please subscribe to my Channel. N9VY started out life as a US Marine Corps radial-engined HUS-1/UH-34D, and when it went to the civilian world was converted to turbine power using a pair of coupled Pratt & Whitney PT-6Ts and received a new, extended nose to enclose the PT-6s. The Sikorsky H-34 (company designation S-58) is a piston-engined military helicopter originally designed by American aircraft manufacturer Sikorsky as an anti-submarine warfare (ASW) aircraft for the United States Navy. It has seen extended use when adapted to turbine power by the British licensee as the Westland Wessex and Sikorsky as the later S-58T. H-34s served, mostly as medium transports, on every continent with the armed forces of 25 countries. It saw combat in Algeria, the Dominican Republic, Nicaragua, and throughout Southeast Asia. Other uses included saving flood victims, recovering astronauts, fighting fires, and carrying presidents. It was the last piston-engined helicopter to be operated by the United States Marine Corps, having been replaced by turbine-powered types such as the UH-1 Huey and CH-46 Sea Knight. A total of 2,108 H-34s were manufactured between 1953 and 1970

I think that is the same type that was in Full Metal Jacket too…maybe? 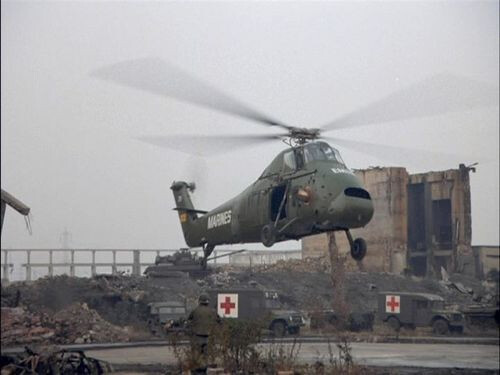 and you wanna know what p3d have great that xp11 and msfs not have? Excellent and superb made 4 prop airliners/birds! XP11 and msfs not even 1 with normal quality.
P3D:
A2A connie
A2A B17
FR DC4, Heron, halifax
Default C130
Soon PMDG DC6
… and more…

Also with normal quality atc that integrates well with justflight global traffic.
So all this is not to say that p3d is better or worst than competition, its only to say that it also have their pros and unique features that make him a good choice depending of your personal virtual aviation tastes and expectations.

I was not aware of the PT6 conversions. Pretty neat seeing those things still flying. A few years ago I would occasionally see a yellow (orange?) radial-powered S-58 flying around north NJ. I wonder what became of it?

I’ve seen the one based out of “Hot-lanta” around…from Florida to DC. It can often be seen out doing contracts lifting AC units onto buildings and doing other one-off type install jobs. Not sure if it is still out there flying…

I added a couple of shots taken after shooting an RNAV to rwy 28 in Princeton. @BeachAV8R has been promoting the RealityXP plugin for ages and I’ve resisted for too long. It makes flying IFR in VR such a pleasure. Approaches are point and click and intuitive. As you near each transition the plate expands while maintaining a moving map overlay. Aural warnings announce altitude changes and the PDI (glideslope) on the HSI allows for smooth descents. Personally I think you’d be nuts to fly a 500E in the soup single pilot without an autopilot. I doubt that it is legal anyway. But that’s why we have sims: to do things we can’t or shouldn’t do in life. What a blast this silly little hobby can be!