I’ve managed to stay away from Civilian Sims for quite a few yrs now.I needed to cut my budget for tuition.home repairs and other things…but I’m starting to get that itch again Yeah. XP 12 is looking pretty fine. Looking forward to it being available to play.

I’ve managed to stay away from Civilian Sims for quite a few yrs now.I needed to cut my budget for tuition.home repairs and other things…but I’m starting to get that itch again

Hmm. Are we sure that’s actually XP12? Maybe it’s me but arguably that looks worse than XP11, even for stock aircraft, and the other videos on that channel are… a bit suspect.

I totally agree that XP12 is looking fantastic but this video…

This month! Austin promised at OSH.

Are we sure that’s actually XP12

Yeah. To be honest, that video didn’t really impress me. I am just generally excited about what’s coming. This looks pretty cool as well:

This month! Austin promised at OSH.

I was going to propose September. That was my feeling a few months ago.

As soon as the XP12 version of the Challenger 650 becomes available, I will upgrade to the new version of the sim. My intention is to use XP12 pretty much just for that airplane…we will see how long that lasts.

Have You Seen This??

The Cessna 421 Golden Eagle is an American six or seven seat twin-engined light transport aircraft, developed in the 1960s. A wonderful aircraft: fast, powerful and just plain sexy. We had access to one of these beauties and did not miss this... There’s lots to like. The autogen scenery looked plausibly Texas. But then it’s pretty easy to do plausible Texas. Funny how the same King Air kept ending up at the same ramp.

when I saw it for the first time I was like ’ well, I can wait few more months ’

but on the other hand its going to be early access after initial release so its gonna get polished. 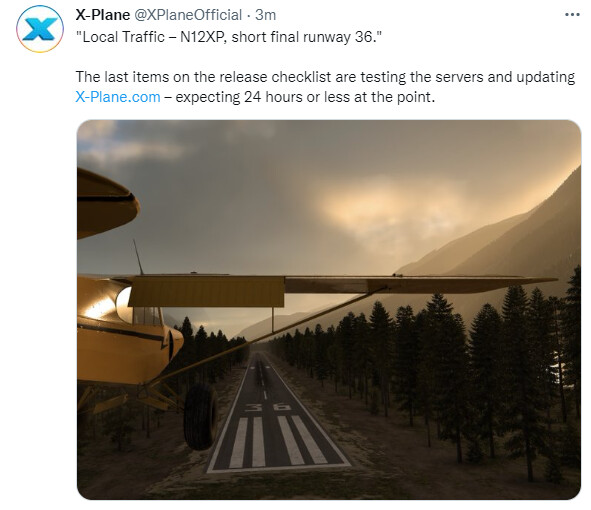 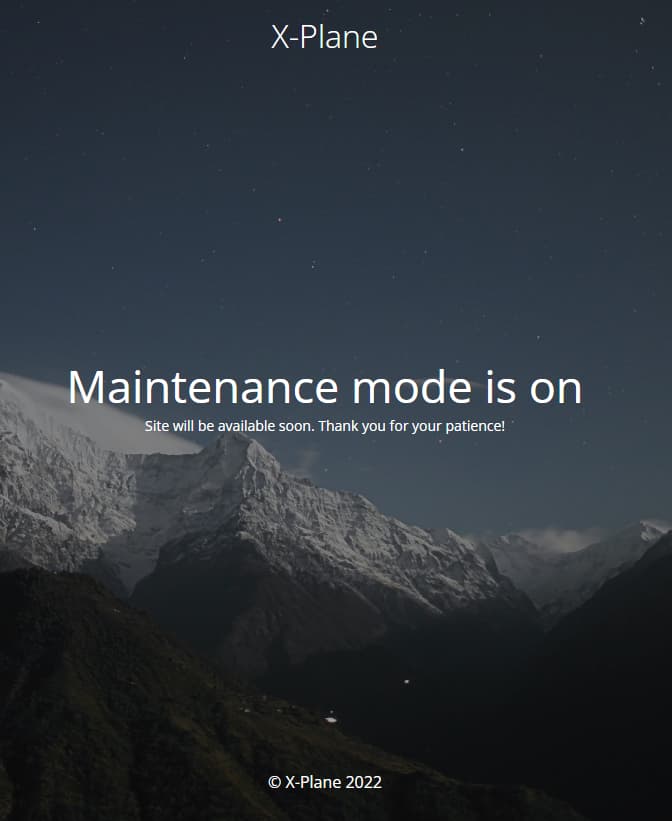 First Impressions:
I have a old PC (GTX1060, 24GB RAM, i7 920) and runs fantastic without stutter!
The default aircraft for example the baron now have the cockpit in HD
The clouds and rain effect is gorgeous and finally i not have to use and think to get any addon (as i have on xp11). Infact the rain its unbelievable good. The pings on windshield, the sound, the movement of them according with the speed, the water on the ground, the light global ilumination, etc etc its unbelievable good! Including only rain where exist a cloud, so you can get small spots out of rain. Its very very very good!
Also finally atc works, because idk in xp11 it never worked even following tutorials.
I have hundreds of paywares on xp11, but even if no one are converting for xp12 (and many will be converted) imho, only xp12 with the default as it have out of the box, worth all cents and i gota WOW moments.
Also the ground is more plausible and the looks more potorealistic and not as catonish as xp11.
Thanks Austin Meyer!!!

Congratulations on going first, @stavka! I’m sure many more will follow. I know I will.

really thinking about this one.
need to go again through the improvements over XP11 as the demo showed me improved visuals but thats not the right selling point for me. I bet there is more but thats probably not that obvious on first try.
I mean I am more focused on the raw performance. will run XP12 and XP11 at the same place with the same default plane and will see. My impressions as they happened.

The R22 is better than VSKYLABS R44. Exterior and interior show more detail. The cowl doors open and the test lights work.
The R22 was very sluggish in roll. That was a disappointment because the real R22 is anything but. After screwing with different control settings, I discovered that the VR controls (ergonomic) set at 1.2 was just what was needed to make it nuts on.
The autogen was a disappointment. It shouldn’t have been. LR and Austin were quite honest about what to expect. I guess somehow I had hoped that they were holding out on some visual surprises.
Still, it looks much better than it did, especially clouds, water and color saturation.
VR performance (Quest2) is where the real surprise was! With everything set high it was super smooth, even NYC. I’d read some negative impressions, perhaps they were from G2 users, maybe? For me the performance is clearly better than XP11. No stutters. No skips except when the weather changes (install is on a harddrive).
The ambient sounds may be a bit overdone. Our world is noisy but perhaps not so much as LR would have us believe. I landed the R22 in a forest clearing and shutdown. The wind through the leaves and the birdsong brought a little poetry to a cold sim. Being a contradictory human I liked the effect so much that I turned environmental sounds to full and slid everything else back to 33%.
Rain effects were another surprise. I expected VR rain to be dumbed down. Maybe it is compared to 2D, I haven’t checked. But it is the best rain implementation I’ve seen yet, either in Cowan’s plugin or in DCS.
The S76* was another surprise! It’s quite nicely done inside. While it may not quite be the show-piece that the F-14 and 330 are, it is a big improvement over what we had in XP11. I would put it just below Cowan’s and X-Trident’s helicopters in look and fidelity. It beats both by a mile in sound. I landed it at the midtown heliport, where I rode along for a super-model transport a few months back. I couldn’t set the brake for some reason. I shut down and stepped outside to watch the poor helicopter slowly roll backwards into the Hudson. Initially the nosewheel was canted so it turned tail towards me then rolled forward the rest of the way into the river. When it had sunk about halfway to the mast, it began to float and bob and eventually overturned. Funny and fairly realistic.
No crashes two hours in. Nor was there ever any sign of struggle. It just worked as well as, and performed much better than-, XP11.
I hope this will be enough. Despite the visual improvements, this will never look anywhere near so good as MSFS. Some XP users are gone forever. Hopefully enough will remain and be helped by new fans who don’t mind the dated look.
The last time I was this satisfied after an impatient wait was when IL2 implemented VR. And many years before that, Black Shark. Best of Times!

*Day 2. OK, so the S76 isn’t quite the quality that I was seeing that first hour through my excited rose-colored glasses. It’s the same from XP11 basically. Still nice enough for a freebie.
The clouds in VR have issues similar to what I recall with IL2 when it updated to volumetric clouds. There’s quite a bit of shimmering and occlusion between: the different cloud layers, cloud and horizon, and cloud and haze. Also like IL2, the highest setting helps a lot without any noticeable hit.
I still want just a bit more saturation in the colors. I am not looking for Cryengine cartoonish stuff, just what I feel we see in real life: when the sun is low, colors are warm and really pop. When the sun is high, the colors are balanced but full unless there’s a bit of haze. XP12 is way ahead of 11 and, from screenshots I’ve seen, also ahead of the more Cry-like MSFS which errs in the other direction. Still, there’s real room for improvement.
The F14 is fun. It is, however, not DCS. The exterior quality is just as good. The interior is good but not AS good. FM also feels a bit better in DCS. But I am also using VR controls so the comparison is not fair. Carrier landings are a bit easier in XP with the Tomcat. It more stably holds trim speed during throttle flight path adjustments.
The winter effects make XP a very different sim. I flew the R22 from JFK to the fast moving frigate and suddenly had to rush as the windscreen began to freeze over! I also noticed that the little red flood light can be swiveled just like the real thing.
Like XP12, the Oculus “Clock30” performs noticeable better than “ASW Auto”, especially in heavy conditions like JFK in rain or snow. The old trick of turning the mouse pointer off in VR also seems to have the same positive impact on performance as it did previously.
In VR the ice effects are a wee bit disorienting. From a distance they look fantastic. But up close you begin to feel odd (queezy, confused, disoriented…not sure). The reason is that the ice layer appears to be about 10 feet below the surface. It’s as if the paved portion is translucent, exposing the frosted portion deep below. A small price to pay for something so otherwise convincing.

Days 3 and 4. More playing with the F-14. I figured out how to cold start it by assigning hotkeys for GPU power and Ground air. Traps are a hoot! I haven’t figured out if weapons work yet. Not so interested in that department anyway.
ATC is another area where there’s plenty of public demand but it’s not really my thing. I tried a VFR flight from Atlantic City to Ocean County and another from Princeton to Morristown (all NJ). There are a few bugs. One, ATC often changes squawk codes with frequency changes. This is a PITA in a helicopter with no autopilot. And it doesn’t happen IRL unless there’s a code conflict with another flight. Also, the frequencies sometimes don’t make sense. Out of Princeton my first frequency was “JFK approach”, then NY Center, then “JFK approach”. There is no such thing as “JFK approach”. It’s NY TRACON. At low altitude they wouldn’t have you go to center, they’d keep you with approach/TRACON. It wasn’t terrible, just not much better than before.

Day 5. Tailwheel airplanes behave normally now! I cannot begin to fully express how impressed I am with this beta. Once, when something great released, I used to say “X” is the best initial release since Black Shark. XP12 has taken that old mantel. The surprises keep coming and nearly all of them positive. Propstrike’s Quatam River.

Day 6: I tried a little A2A with an F4. According to the GUI, there is no AI model for the F4 but nonetheless it did manage to shoot me down. I guess I possess something even LESS than an AI model. I got revenge with guns. The weapons functionality is basically unchanged from XP11–pretty lame by DCS standards. The new HUD is fantastic. It’s no F14 HUD but serves pretty well as a late generation layout of all you need. For carrier work, it incorporates the same E-bracket used in DCS. I also tried Ortho. It works but looks quite rough when mixed with autogen trees so I am skipping ortho for now and trying to appreciate the autogen for what it is: a decent approximation of the area you are in, especially if that area is North America or Europe. I’ve just noticed the rain effects in puddles. Very nice. The sim, with real weather checked, is how I learned that it’s actually raining outside! 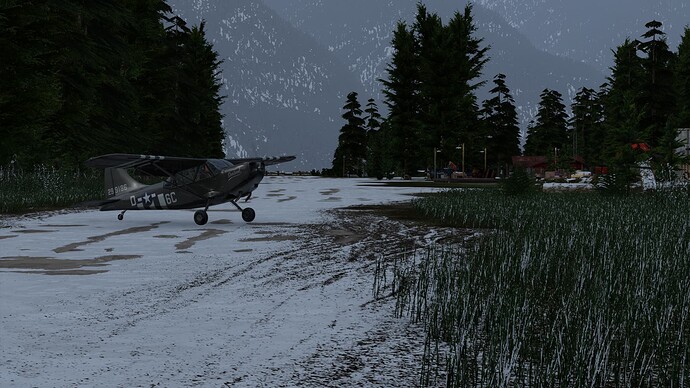 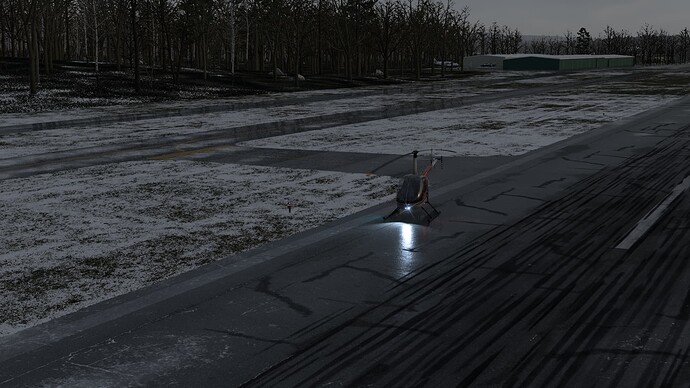 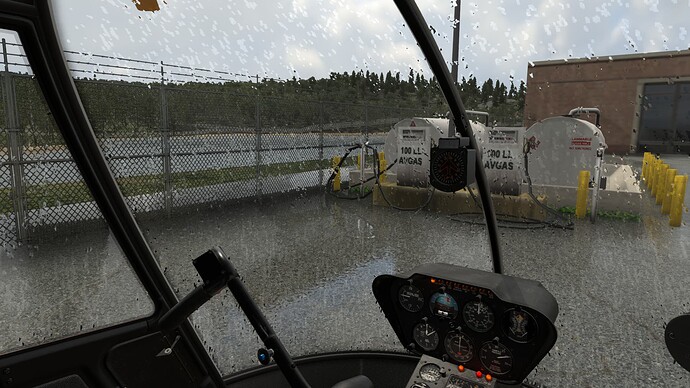 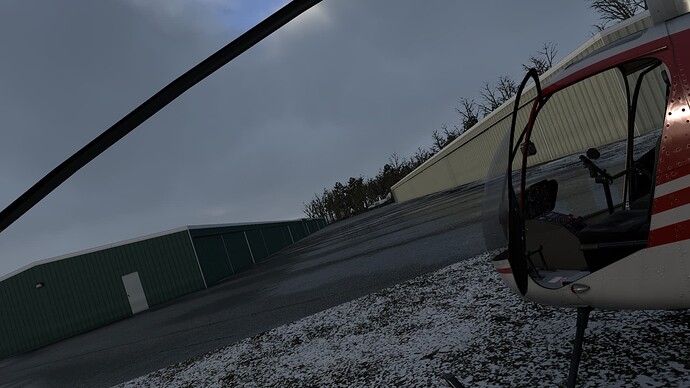 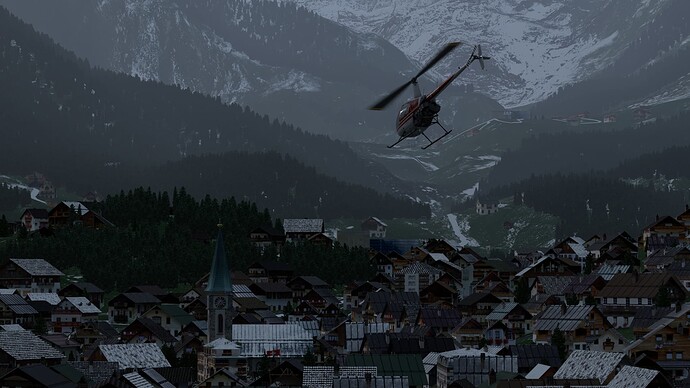 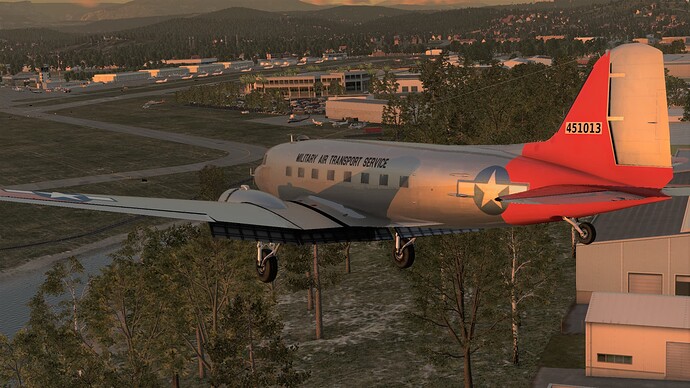 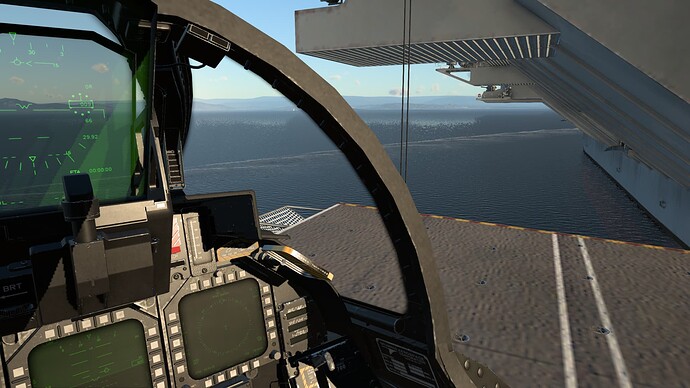 (in fact I wanted to ask for your opinion)