Part 2 - It weighs heavy on me
Part 3 - Tables. Tables everywhere…
Part 4 - This time we go north

Hello everyone! I figured there would be no better place to keep track of my playthough of the campaign ‘Spring Tension’, a DCS World Mi-8MTV2 singleplayer campaign. Let’s kick it off with mission 1, it’s about as standard as a DCS mission is!

If you ever have touched a DCS Single Player campaign then you are without doubt familiar with the flow of a campaign, it always starts with a short introduction flight familiarising yourself with the region you will fly in.

And Spring Tension is no different, we find ourself outside the town of Java in South Ossetia, occupied by Russian forces. The mission briefing makes it clear that most of the daily tasks in the region are handled by helicopter due to the lack of airbases. 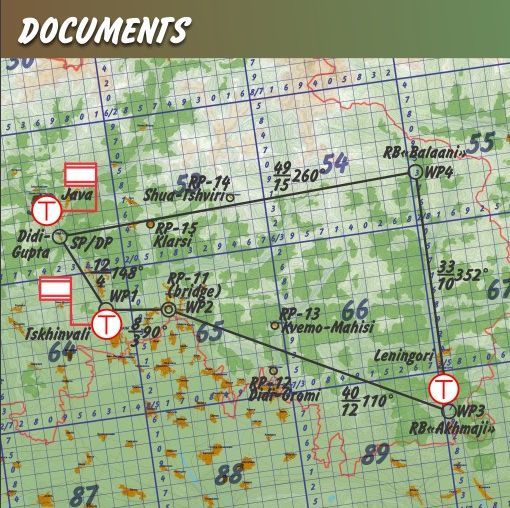 After take-off our first stop will be Tskhinvali, after that we follow the borders and fly to Leningori. Finally we head north to an outpost named RB Balaani. After this we hop over the mountains back to homeplate.

Departure time will be 9.15 with a slight breeze coming in from 263.

With a fancy flame the APU whirs to life as the cockpit lights up. Slowly the engines spin up and before I know it she is ready to fly.

The Mi-8MTV2, what a fantastic machine deserving the “Magnificent Eight” title given to it by Belsimtek. I’ve only been flying this wonderful creation for a week but have completely fallen for all its beauty!

A course is set to the capital of South Ossetia, Tskhinvali and soon enough I get some life advice from my trust co pilot(Cool Glasses, look at em!). He informs me not to fly over the villages, in case the residents may not feel too kind to our presence. Fair enough with me, as long as I don’t see missiles fly past the helo!

A gentle landing later; the Hip doesn’t forgive as much as the Shark or the Huey on landings, we move on along the border with Georgia. Once more Cool Glasses warns me. This time not to cross the border, it looks like the Georgians are spoiling for a fight!

Another border waypoint that we pass by, I suppose we better be careful so close to the border!

Having a look south into Georgia, what a beautiful sight!

I get a bit carried away as we approach the next waypoint, which was supposed to be left alone, but alas I landed! And soon we are crossing the ridge to the south-eastern outpost right next to the road. I get ordered to put the Mi-8MTV2 down next to the farmstead, and why not? I am in a cheery mood today, almost gave the fence a gentle boop’ing with the nose!

The trusty guards on the ground make quick work of grabbing their supplies from the Hip and soon we are on the way again, to the last objective of this flight! But first, let’s admire the wonderful job they did wit the camouflage before we set off to the small outpost way north.

Another quick landing and a wave and we are on the way once more, this time we cut straight west across the mountains to visit home plate again!

Close to home the icing light comes on warning me of engine icing, fortunately I am already descending but it doesn’t hurt to flip the icing system to manual.

Slowly but surely coming in for final approach.

The total flight is just over an hour long, mostly due to my unscheduled stop I suppose!

And last, a few more shots of this wonderful chopper that has so quickly taken hold of my hearth!

Nice job…! And beautiful screens as well…! Welcome to Mudspike…thanks for taking the time to write that up…

Thanks @fearlessfrog and @BeachAV8R, I love taking screenshots of DCS!

Thanks! Part 2 is up, I’ve edited the post with a link!

Thanks! I was hoping to get Mission 3 up today but alas, it’s a gunnery range mission in which you have to destroy 2 objects in 2 passes with 1 mock pass to start off. Any deviation of this or failure to destroy means the missions fails.

Guess once who sucks at weapons employment in the Mi-8? This guy! double thumb point at self