Those of you that are using Active Sky for X-Plane - what cloud art are you using to enhance the weather because as it stand now, it really look pretty ugly.

From what I understand - Active Sky XP is a weather injector at the moment. It reads all the weather data and help put that weather in a realistic fashion into the sim. Super. According to the developer page, the actual cloud and atmospheric artwork is on hold right now because of changes that Laminar has been making to X-Plane, so no sense duplicating effort or making something that won’t work later (maybe it has something to do with the rotating clouds?). So I’m fine with waiting. But having come from SkyMaxx Pro, which had pretty good looking clouds, I’m really disappointed at going back to the stock X-Plane clouds, which look grey and polluted looking.

I see some cloud art plug-ins on the .ORG, and even some payware stuff. Just wondering what everyone else (that is using Active Sky XP) is using?

Made it to Singapore and ActiveSkyXP threw some great weather at me for the trip.

. I may have to find an alternate weather app.

We want to hear the details @Fridge

I was considering this utility for a while now but I guess I will wait a little more. I would say that such utility is essential for P3D as there is no possibility to inject real world weather. But I can live with default XP capabilities until there will be utility worth the investment I would say.

I will try to post some screen shots later today. Basically I seem to be running into three issues:

Or it could just be me

I may be misunderstanding the configuration or the anticipating results that the software can not deliver.

To @BeachAV8R’s original question, I know that the ActiveSkyXP people are rumoured to be working on their own version of the Weather Graphics plugin and are waiting for the update that brings X-Plane into the Vulcan era but I went with Ultimate Weather XP, which was nice graphical jump from the default weather that ActiveSkyXP used (X-Planes default weather).

Thanks for your observations @Fridge - it confirms that I’m not totally off base.

For the past hour I have been dorking around with FSEnhancer. Caution - your mileage may vary and definitely, definitely back up your Resources folder (or whatever changes you might make). FSEnhancer does the following (it is free…but donationware):

It does this stuff via Plug-Ins, so keep that in mind in case it starts to conflict with something. It does seem to work well with Active Sky XP in that it draws what ASXP is telling it to draw. It is better “looking” than the stock or slightly improved ASXP (resolution) clouds in that things don’t look as grey and flat, and it seems to do a good job at drawing very complex, multi-layered cloud depictions. It looks really good in static images, but in motion, the clouds have a very rolling and translucent appearance that I don’t know I’m sold on. I’ll really have to take a look at it in VR. It does make for some really nice screens though. 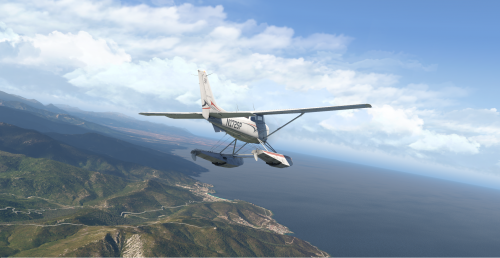 You can part and parcel it to choose which components you want to use. I went full bore and picked all the components (lights, haze, waves, etc…).

Performance is very good…I don’t see much of a framerate hit at all. I’ll need to check out low IFR conditions (like 200’ and a 1/2sm) since I’m interested in what that depicts too…

@Fridge - some of the issues you are encounter may be solved by using the Active Sky flight-plan feature. I’ve not experimented with it yet, but the manual seems to indicate it gives a better depiction over a route, and prevents perhaps some of the wild changes that you might get otherwise. The problem with any injection system is that often AWOS systems can vary rapidly from one observation to another due to holes in the sky above or a dragonfly on the sensor (LOL)… I don’t know exactly what “flight-plan” does, but it purports to give a better overall experience.

That makes sense. I have been, from time to time, putting in a flight path so that I can get the route briefing (122.05 on the radio) which is kinda cool and useful. But when I restart ActiveSkyXP due to the fighting issue, I did not put it in again and that may have caused some of what I was seeing yesterday.

So I found a place with LIFR - Saint John (CYSJ) with a nice looking METAR showing 300’ and 1.5sm… Not totally on its butt, but good enough…

Climbing out…things looked good up top. But still the cloud rotations and sliding as you are passing through them might make this mod (FSEnhancer) a no-go. Might have to look for an alternative. I dunno…

Those screenies certainly look the business though.

So here are a couple of screen shots of the ActiveSkyXP window. The first is the view at my takeoff time: 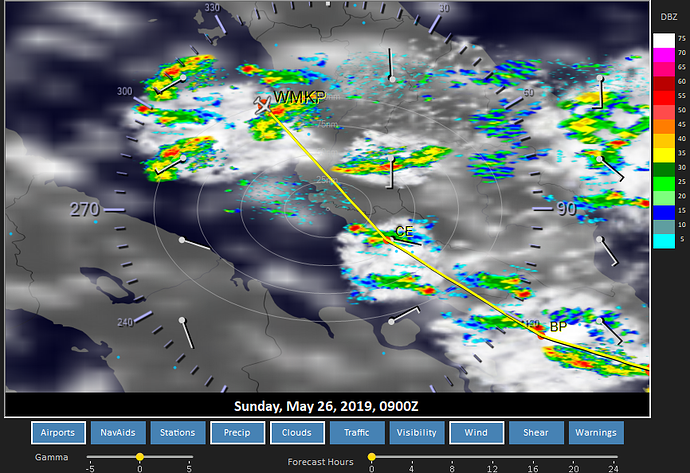 The second, I have zoomed in two ‘clicks’ of the mouse scroll wheel. 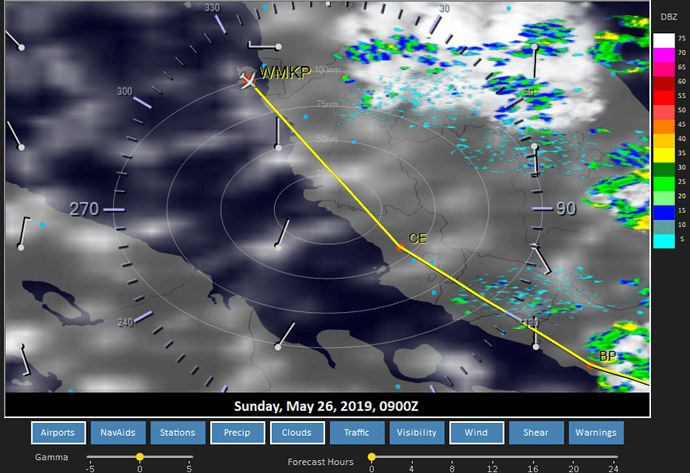 The third is 30 minutes later. Granted the weather could have changed but me changing the time in game and waiting for ActiveSkyXP to sync up and show me the weather for 10:00z did not give me this picture. It was much, much cleaner. 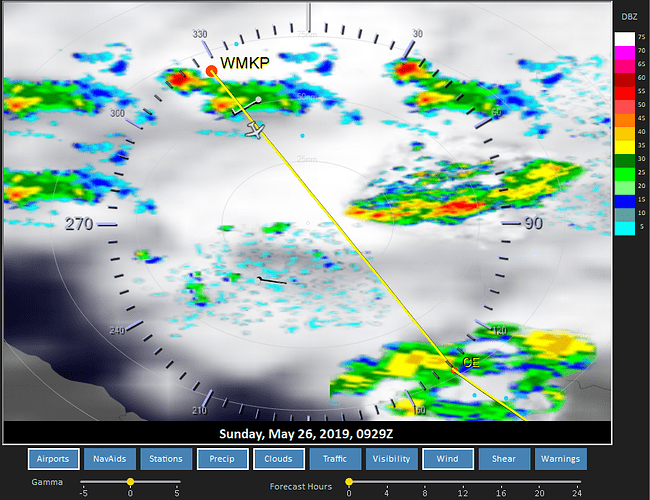 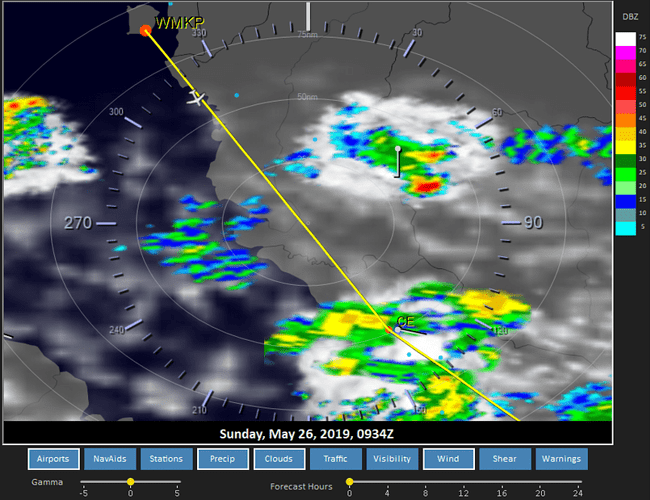 I am confused. It was at this point (I think) that I started getting the weather fighting and restarted ActiveSkyXP.

Here is my short flight out of CYSJ for CYFC. From ActiveSkyXP’s perspective here was the weather:

I did not notice any cloud rotations but I also only climbed up to about 5000ft. And ended up in between two layers?

Here is a shot just before the airport bubble.

And then shortly after everything disappeared except for the nearest of lights (not sure what they are called but the runway center and the glideslope lights. The rest of the runway lights disappeared into the fog until I was much closer.

I was getting pretty terrible FPS on this 1070 due to the low clouds. It was ok for the sim but the OBS recording was … not good to replay

Found that I had the 'Use Global Static depiction mode turned on. That may account for the snappiness. Also had weather refresh st to 5 minutes … because who doesn’t want the latest weather

So I’ve spent all day on this. Well, not all day, I did a lot of work outside…but I’ll bet I spent at least two hours and relaunched X-Plane probably about 30 times. I was pretty happy with the Active Sky XP + FS Enhancer combination, but then discovered something in the TrueHaze.lua file (the one that actually is responsible for the clouds) was causing my cockpits to be very dark…almost like the HDR was too high. I turned off HDR (in X-Plane) but that didn’t fix it - it was something in the .lua file itself.

I spent an hour going line by line through the file making changes and then reverting, finally narrowing the offending entry to these entries, that needed to bumped up a bit to prevent some weird lighting interaction with the cockpit shadows:

The default levels are .30 and bumping them up gives me a non-dark cockpit…it only took me an hour to find that. I’m still not convinced I want to keep the FS Enchancer clouds. The lighting and clouds do look stunning when injected with Active Sky, but in motion they have some weird…well…motion. So I don’t know what to do about that. But it does look fantastic.

Example of my weather angst.Probably turn your audio down to start as it is a bit abrupt. The voice is the FSFlyingSchool AI who acts as a co-pilot would act … as I imagine it, with the nagging and such.

X-Plane at night in VR is just insanely immersive…I think I was actually dreading getting wet while unloading! 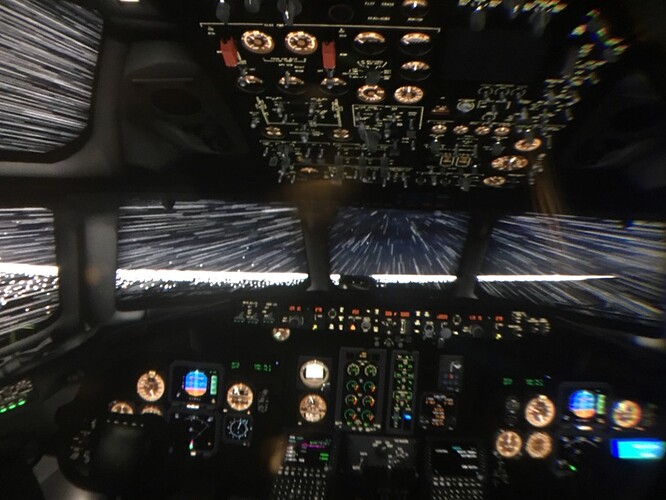 I’ve been pretty busy getting us ready for the move to Charleston and getting a hip replaced in the middle of this. So, have been only flying with ASXP and the included replacement textures. They can be a little splotchy at times and are not very dramatic as compared with some of the Cloud Art themes for P3D, which are amazing.

But one thing that I really like about them is the transition in and out of clouds and layers. That is pretty good IMHO. You know that look when you are coming out of the clouds and then ride along the tops, like skiing on powder? I rarely see (feel) that in a sim. It always has too rapid a transition, like they don’t have depth and texture beyond the 2D view. But with ASXP and the replacement textures, while the dramatic look (dynamic range?) is not there, leaving them looking a bit flat, flying in and out of layers and clouds feels pretty realistic.

I want to try SMP4 with ASXP as the weather engine next and see how that goes.

Edit: in that last shot the haze and light coming through the clouds is about perfect IMO.