So I preloaded Dovetail Flight School the last couple of days - and now I’m home and having my first crack at it. I’ll post my thoughts in this sort of “stream of consciousness” post as I work my way through the content. I’ll put up a proper article (maybe) shortly…but this will mostly be thoughts as they hit me.

Launched the program and went through some configuration menus that asked if I wanted to be notified of updates, picked a pilot name, and picked a “home” airport. This can be any airport in the world apparently. I don’t know what the level of detail is for the airports (haven’t been in the sim yet), but I picked a nearby airport to me (KAVL - Asheville, NC) which is up in the mountains west of Charlotte.

The GUI is nice with a big map showing all kinds of VORs, NDBs, airports, etc… Scrolling in and out shows various levels of detail. Personally, I’d love to have seen a few overlays like sectional charts, IFR charts, etc… You can see the FSX origins of much of this, but the menus look good.

Next it was on to graphics customization - I maxed out all the sliders and 1920 x 1080 and all that. I decided not to start with free-flight and instead go right into the meat of the matter - which is trying to pretend I’m the target audience of Dovetail Flight School (DFS).

Looks like 9 missions in the “Flight School” portion (so far) which you must unlock in sequence. You can pick one of two Flight School locations - I picked Prescott, Arizona because I went to school there (yay!).

Lesson 1 - The Traffic Pattern. The Piper PA-28 looks pretty nice in external views. The sky is still a bit blue. The text and voices are good. Now I’ll fly the lesson and see what I think of it.

Lesson 1 first impression thus far. Same directional compass and flashing arrows that FSX uses. Very, very, very familiar feeling…views are all FSX (S and A keys) and most of the on-screen stuff (brake messages, etc…) are all right from FSX.

Seems odd that you are thrown directly into moving the airplane around the airport (you are given taxi instructions) without any guidance on throttle, rudders, yoke. It is assumed that you know what all those controls do, what the appropriate positioning of them is, and that seems to be in direct contradiction to the target audience of this sim. Odd.

The old, annoying quirk of FSX is there - where the airplane slightly bounces when sitting on the tarmac at random moments - like it does a little bunny hop. All views are exactly the same, external, fixed, fly-by, top down, tower, internal viewpoints…all directly from FSX.

Inside of the PA28 is really digital looking…like it lacks texturing so it looks like a computer programmer made the instruments in a digital editing software…they don’t look real at all. Boo…

As I taxi, I’m getting told about the traffic pattern and how important of a skill it is to learn. As a real instructor (CFII), I would never take my student into what is a really busy, busy, overwhelming environment such as the traffic pattern. First flight - they would like do the takeoff while I handled the rudders, and then we’d go do some very light sight seeing with no radical maneuvers. Examine how the ailerons and rudders work, how the elevator and trim works…and how the plane responds to power changes. Again, the first lesson seems a bit outside the bounds of the target audience a bit. (IMHO)

Anti-aliasing in the cockpit is horrible (as Froogle mentioned) jaggy shadows, and the instrumentation at the default viewpoint is really hard to read. Like I can barely read the numbers on the airspeed indicator unless I lean in a bit and you wouldn’t be able to read any of the oil temperature/pressure/fuel gauges without leaning in…

Overlays are nice though…the menus and comm menus (dialog) look really nice. And I’m actually a BIG fan of the mission layouts, but they are the same as FSX - just follow the instructions, follow the arrows on your mission compass on the upper left corner, and follow the green arrows that are out along the path of your flight. Always loved these, but I’m still trying to figure out how this does anything better than the vanilla FSX flight school.

Kind of annoying though that all the onscreen menus come on whenever you hit the pause key. Nice highlighting of the instruments you need to reference. Slight crosswind so you need to adjust for that. That probably isn’t a great idea for a first mission either.

Airborne now and having a look at the terrain and airport. Since Prescott is only one of the two areas that are “flight school” choices, you’d think it would be ultra pretty. The terrain is not good at all… The objects on the airport look like they are placed there but they look really odd - no real shadows. All around the airport is green…like it looks like prairie green. Prescott is not green in real life. Ground detailing and contours are not very good at all either.

To be continued when he falls asleep…

Pitch to climb at 75 knots and climb to 5,700’. OK…if I knew what pitch was and what a knot was…I’d be in good shape. Remember…I’m a “Brand New Simmer” that this game is appealing to. Right? A new simmer is not going to know how to read the altimeter…and probably won’t know why the altimeter just doesn’t read their height above the ground. Why does the altimeter read 5,700’ when I’m only a thousand feet up? (asks the student)…

OK - good walk/talk through the pattern. But again…seems like jumping into the not quite shallow end of the pool. I’m a new simmer and I haven’t set up my HOTAS…I have no idea how to trim the aircraft, so I’m holding control pressure throughout the pattern. (And I am because I haven’t set up my Warthog trim assignments in the control settings…) Should the instructor tell me how to relieve this constant input I’m having to make?

Are my feet supposed to be doing anything? What are those pedals on the floor for anyway? Should I be pressing on the opposite pedal as I turn?

OK…so I’m a little low on the downwind (pointed out to me) and a little fast. How do I maintain 90 knots? Pull back on the throttle right? That’s the red one right? (Wink) (Every student of mine at one point or another probably tried to kill me - some multiple times…LOL…)

Power to 75% (where do I read that?)
Lower the nose to initiate a descent
Lower the flaps (where are those?) Why do I need flaps?

OK. My gripe on the graphics is probably misplaced. No, it doesn’t look as good as default FSX - the roads, hills, and town are of very low resolution…as is the mesh, but this is a $15 introductory product…and the visual clues to fly around the airport are adequate enough.

(I’ll try to pretend that I’m so new to simming that I don’t know that FSX: Steam Edition regularly goes on sale for $4.99…and that $15 seems like a great deal compared to paying $50 for a brand new game like Fallout…)

Keep this turn (to final) shallow since we are flying slow. Why? What could go wrong? I know nothing of stalls, airspeed, how turns and G-load affect stall speed. I know no basics. Why am I in this traffic pattern? Why is everything happening so fast?

Lesson 1 complete - I learned to fly the airport traffic pattern. I got a green star. I logged 0:05 hours (5 minutes) On to Lesson 2 - Emergency Landings (!!). And interesting, once I passed Lesson 1, it unlocked all the other lessons (2-8) except for the Checkride - Private Pilot License. So much for step-by-step. 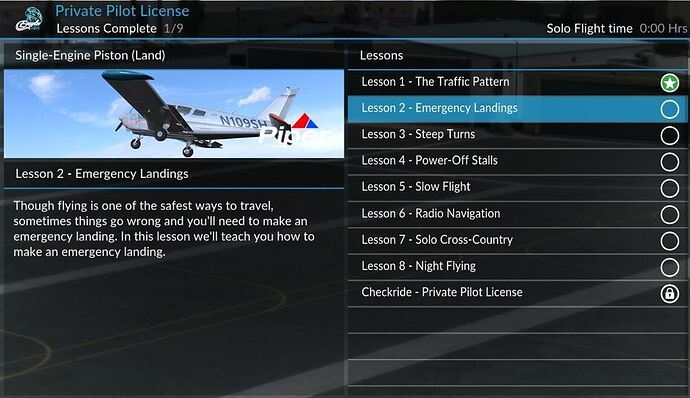 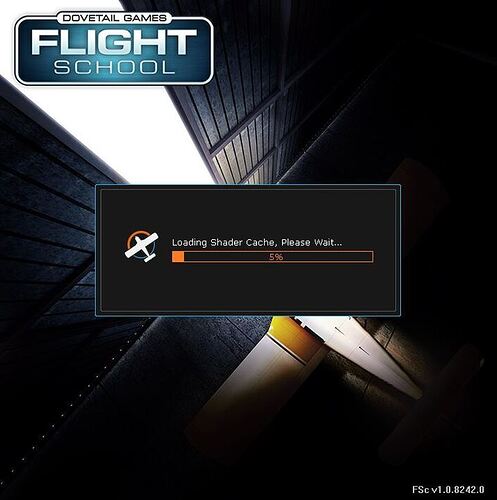 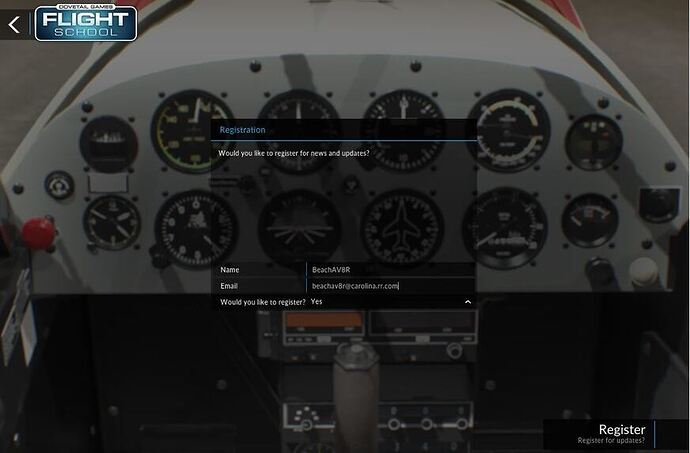 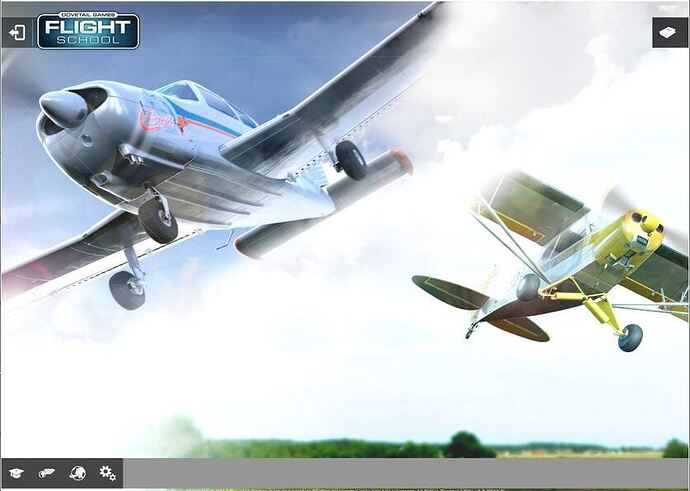 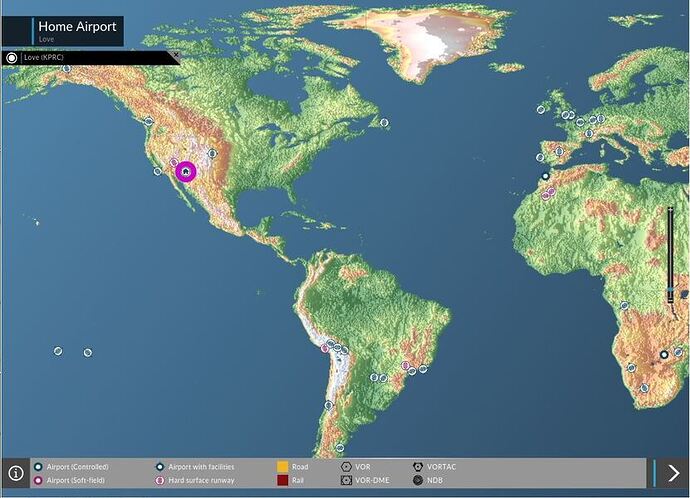 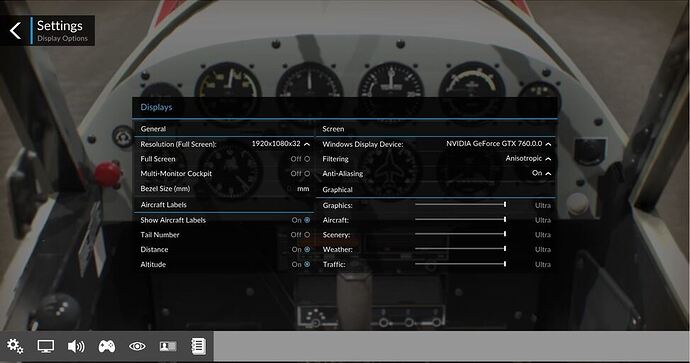 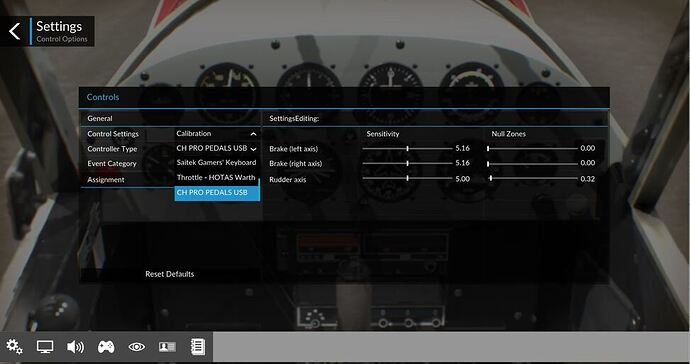 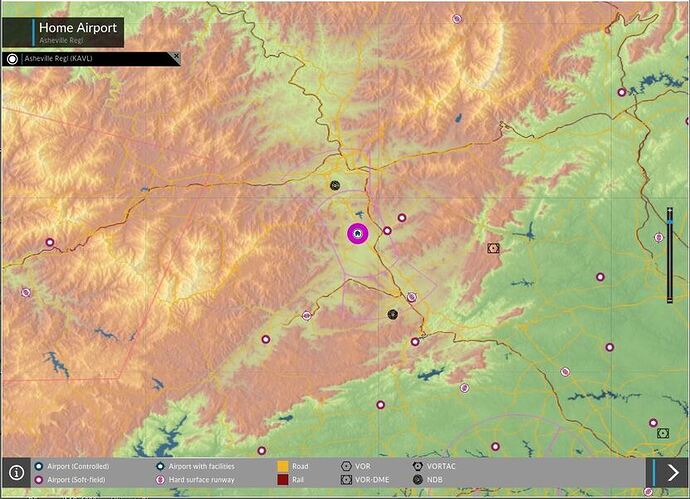 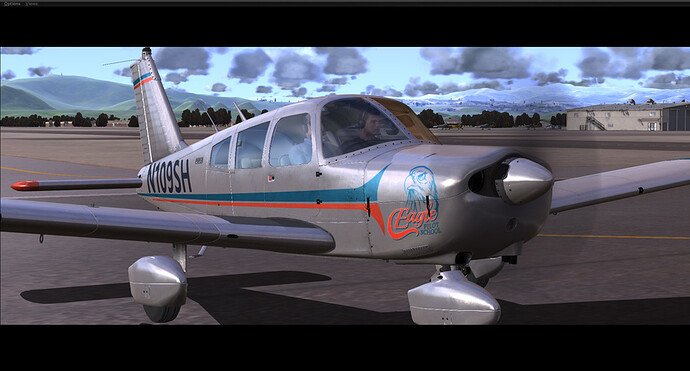 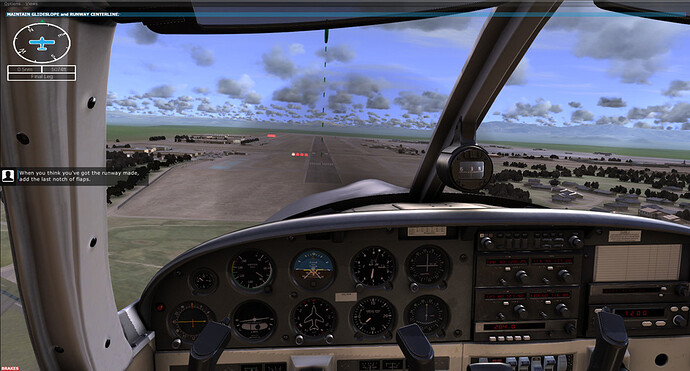 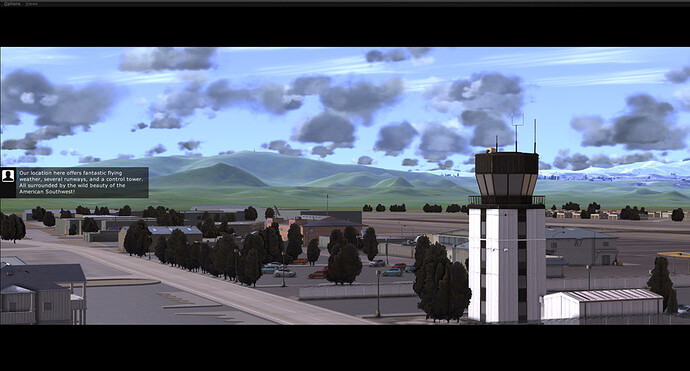 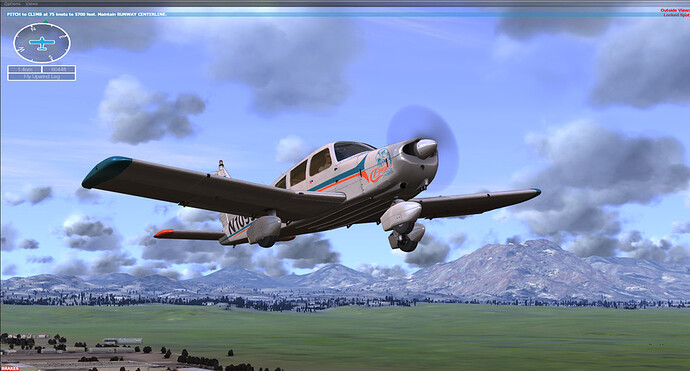 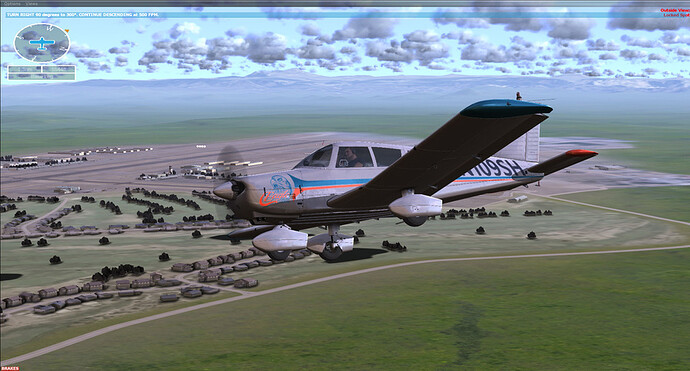 And I couldn’t stand it anymore…I’m going into the configurations to map the trim to my HOTAS. Since my instructor isn’t going to help me out with that…

The utter newbie lessons are the school in England, They probably could have made that a lot clearer, or made everyone start there for training missions 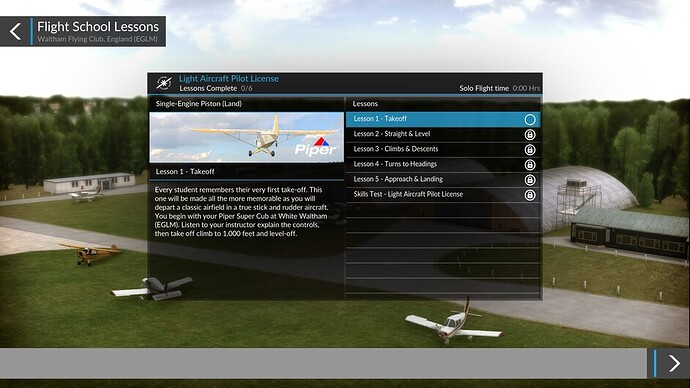 OK…got my trim buttons assigned. You can find full key assignments in the configuration menus…just like FSX…but the slicker menu is actually a bit more difficult to navigate in my opinion.

Now flying Lesson 2 - Emergency Landings. Again, I feel that we are skipping major, major steps here. As a CFI…I would have never moved on to Emergency Landings until my student had a full awareness of the relationship between power, airspeed, and trim. For instance, I would demonstrate to them that the trim is actually just setting a stable state airspeed. Trim for 80 knots. Now completely take off the power, notice how the nose will go down, oscillate through some long cycles where the speed goes below 80, then above, but eventually settles on 80. The trim sets the speed the airplane wants to go. None of this is covered, and is essential to learning how to do emergency landings. You can actually fly an emergency landing from engine out, trim and take your hands off the yoke in most light singles and not be all maneuvering about…just using light rudder pressure to move the nose of the plane. Funder-mentals are being skipped here Dovetail…!

The utter newbie lessons are the school in England, They probably could have made that a lot clearer, or made everyone start there for training missions