Not played with this tool in a while, so wanted to take it through a worked example as a way to show it. CapFrameX is a FPS benchmarking and analysis tool. It measures and records your frame timings for comparison and analysis. It is better than guessing and is free and open source.

Benchmarking Tool - Record Frames per Second (FPS), Frametime and Sensors while running your favourite game. Analyse and plot the results, or share them with friends using our cloud service.

So my question is ‘Is the latest Nvidia driver any worse for MSFS VR’?

What’s been happening for Turing chipsets (20XX) cards is that for MSFS at least the driver updates for the last few months has been not great - each new driver would cause pauses/stutters in VR. The only way to get around this was to go back all the way to the driver 457.30, basically because everything after it was worse.

So rather than just try it and see (too easy!) I thought I’d get some charts going, and as an example of how to use it. The capturing is super easy, and I put a bit of a longer capture time to even out the stats: 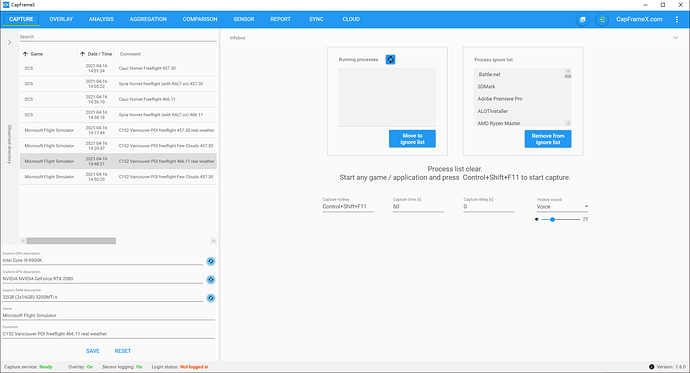 So what happens is you run your sim or game and then make sure the ‘Running Processes’ has it shown. You use the ‘Move to ignore list’ to get rid of things like VR helper apps, SteamVR etc. You then just hit ‘Capture’ and away it goes. Easy.

One nice feature is that it gauges how smooth the gameplay is (all this is in VR for me, but it applies regardless for 2D games as well): 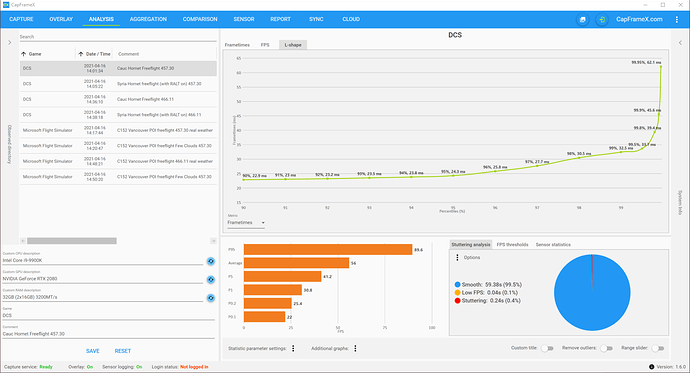 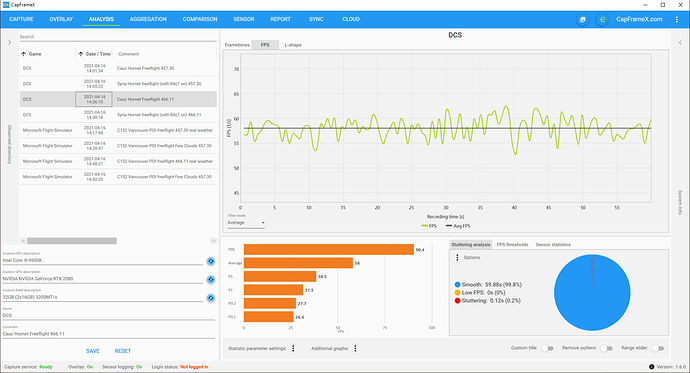 So my test ‘methodology’ was:

CapFrameX is looking pretty nice and I’ll keep it around. Because of all the variables between our settings and PCs it’s not so good for comparisons directly between us, but for seeing if a setting impacts something or a version gets better/worse then it’s a really useful and straightforward tool to use.

Thanks - fpsVR does have an ok History and Reports feature, but this one is a bit better in terms of output’ing of the results and organizing the data, so wanted to share.

I was about to start a separate DCS 2.7 VR discussion, but I’ll crash fearlessfrog’s party.

I ran into this discussion at the ED forums (ED Beta Tester) and it was a healthy gut check on the state of VR in 2.7. Let it play out and things will eventually smooth out.

I just wanted to brain dump some of the things we found that werent mentioned so far from a perspective of someone thats used clouds for several weeks now. Pixel Density and Steam Super Sampling. We found PD was much better behaved than before and...

I just wanted to brain dump some of the things we found that weren’t mentioned so far from a perspective of someone that’s used clouds for several weeks now.

Pixel Density and Steam Super Sampling . We found PD was much better behaved than before and low PD also exacerbated some aliasing on clouds even worse than before. I recommend everyone try going back to PD1.0 and if they have SSS to zero that also and repeat their normal tuning, the performance is much better than it was so you should reevaluate it on your systems.

Mask . Didnt notice any benefit or even if this works yet.

View Distance . Mixed bag. On one hand you dont see the horizon with all those new clouds. And the object culling distance seems to be relaxed from a few patches back . OTOH i think there could be weirdness looking at a distant horizon and having multi layered clouds very close by. If the latter is not a factor for you, reduce your view distance for better frames and less jerkiness when looking in the direction of distant terrain. Likely with the clouds you might not even see the horizon. With the night time lighting conencted to view distance, you need to check if you are flying about near big lit cities. A city like Damascus can beign to cull lights half way through, leading to unpleasant views, if the view distance is too small. Runway lights cull at different distances to city lights

Scenery details factor. This new slider principally affected objects on the terrain so that they appeared to be like a distant model. Like a LOD1. I recall testing Chain home radar antennaes on Channel Map with this because you can change it in cockpit in realtime. It made the object feel like it was from the 90’s. However this visibly gave an FPS boost in the 5-7 FPS range when I tried. If you arent flying low, use it.

Forrest detail . This has been renamed from tree visibility and put next to Forest Detail Factor, no changes to what it does, makes the trees thin out. For Forrest details factor I didnt notice any changes and not sure what it does.

(This one is always a big one after every major update ---->) Gentle reminder to those people who are time limited - every new object you see after this update will recompile its shader in realtime, which really makes the sim jittery at first. Try to run a range of missions first and be patient*. !Some folks are faster to the forums with this observation than they need to be !*

General. I think the frustrum culling has finally been baked into DCS VR but every time I ask its not well known. There are quite a few items that can represent differently in each eye on the terrain. The clouds issue, well, its well explained, nothing more to say there. The overal speed i believe is actually faster for my machine, but I’ve spent far too much time in testing scenerios to really tell anymore, its just a feeling. I did handle 45 FPS locked in VR on a simple flight yesterday which is on my own server which has over 800 units and a fair amount of scripting, and this was including at ground level, which previously was pretty harsh on the frames, so I think its a big upgrade. YMMV.