Man… this thing is truly a work of art. Congrats to Heatblur and ED for making this possible.

The blizzard in Denver is causing my power to flicker on and off now so I’m going to take a break.

@Franze - see the last post in the link by NeilWillis - explains why you got a client delayed start message recently … ?

North of Denver here and the blizzard is rolling in. Already had two power cycles. Plus I’m on a microwave internet connection so the blowing snow may cut me off! Adding F-14Bs to Red Sky and I will prolly put them onto a Carl Vinson, as I have a Stennis for F/A-18Cs. 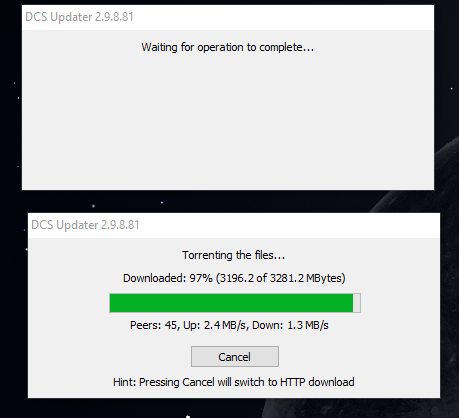 North of Denver here and the blizzard is rolling in.

Someone HAD to do it. So I did.

I think they closed I70 already so that won’t be happening. This is shaping up to be a bad one.

I told them, throw in a couple of huge eyed characters and some tentacles and it could have made it to #6…

But do you WANT those types of customers?

The skins for the Tomcat they’d release… shudder

Their money shall fuel our hobby, and some might become good simmers. For some people, the hobby might start today.

I think they closed I70 already so that won’t be happening.

Wasn’t part of it already closed from the rockslide a few days ago?

Downloading!
At a fairly good rate to boot. 25% done already, at 2MB/s. Also seeding generously for y’all, at 1MB/s.

After the update, the module comes in at about 2 GB or so.

Yeah but they’ve closed I70 east of Denver going both directions now. Take a look at Google maps… the whole Denver area is RED.

I’m just south of town and we’re seeing heavy winds and snow here. This is the worst storm I’ve seen in awhile for sure.

Managed to get the jet up and running in a cold and dark challenge. Although satisfying, it didn’t feel very difficult at all. All I had to do was get the engines running and a selection of other systems, such as the SAS. I kindly asked Jester to take care of his rear-seat stuff. Which was politely refused. Jester won’t touch anything until his demands for safety precautions are met, so the ejection seat had to be armed first. After quite the search to arm it, it’s on top of the seat, I taxied out to the runway.

Up and away! She nearly seems STOL capable… probably because she is so lightly loaded and unarmed except for the gun.

Since I don’t yet know how to utilize her various systems, I’m in manual control of her flaps and her sweep. Getting even just a little of that sweepback going sure makes her more responsive to roll commands.

Let’s get that sweepback going all the way back and see how fast this puppy can go!

Topped out close to 2100km/h across the ground, a very respectable speed. However, I’m in big trouble.

It seems I’m not inhaling much of the good stuff… I thought the pit was pressurized so I was mighty surprised. A quick dive down and a frantic search for the oxygen system controls, which were eventually found left of the seat, pretty well hidden allowed me to regain control of my body.

First weapons employment, a little A2G strafe with the gun. Setting up the HUD was easy. My target was the cooling tower. Most of the rounds hit the target, although plenty also went long.

The Rioni river will lead me back to sea, the place were planes like these belong.

Back near Batumi, 1100lbs of gas left. Had to much fun testing the speed but I am sure I’ll manage. Didn’t took any screenies during the landing attempt… It felt fine although hard to get the trim right. I did lose a little control over my descent rate, but it looks like the gear didn’t bend…

Absolutely fine landing, am I right guys? No problems at all detectable.

Fully shut down and ready for a drink. Jester, who has been quiet for most of the flight, comments “The CO will have our asses for this”.

Overal a very fun plane! A lot more work to keep flying but it feels manageable. When the rumble kicks in and the AoA indicator climbs, swap from stick to pedals for roll. Felt satisfying to skip all the content that has been produced the last few months and step inside her cold and totally not knowing what is what. Looking forward to learning her properly now