Placeholder for screens and AARs for today’s event. 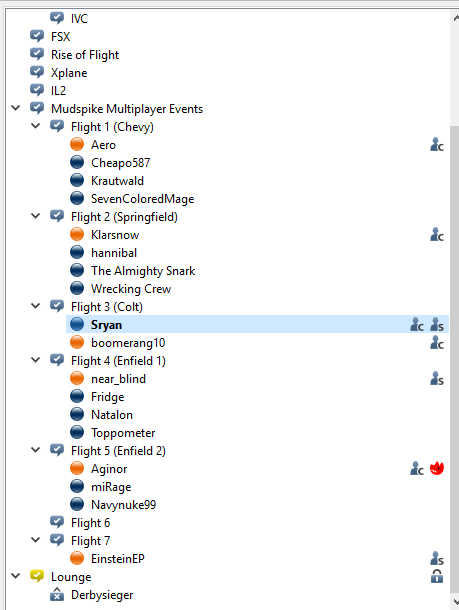 F15’s waiting for the kill command

Couldn’t take any screenshot during the flight.

I was flying as Enfield 2-2 and sticked to @Aginor’s wing like glue for a good reason. I was badly prepared for I didn’t know how to use navigation equipment in the M-2000. I had only 3 hours on this type before the mission (I know, I know…). As we approached Krasnodar warping got worse and I eventually went blind on lead. I did prepare by reading the briefing and memorized rough target location and also remembered how the railroad targets looked like on the intel photos. I crossed city center without finding any targets. I tried to orient using the river as a landmark and luckily managed to find the targets. One quick check on my weapons settings and I dropped bombs. I didn’t look back but could hear from #3 that I hit something. I went to the weeds and egressed 140, Via comms we agreed to meet south. After 1 min or so I turned right. I could not see any fire on me so I dared to check my Map on the tablet. Suddenly a SA-11 transformed my plane into a big orange ball of fire.

The rest of the flight made it home though:

Great times! The AWACS role turned out to be a pretty intensive role, so I didn’t get as many screenshots as I would have liked. Here are some: 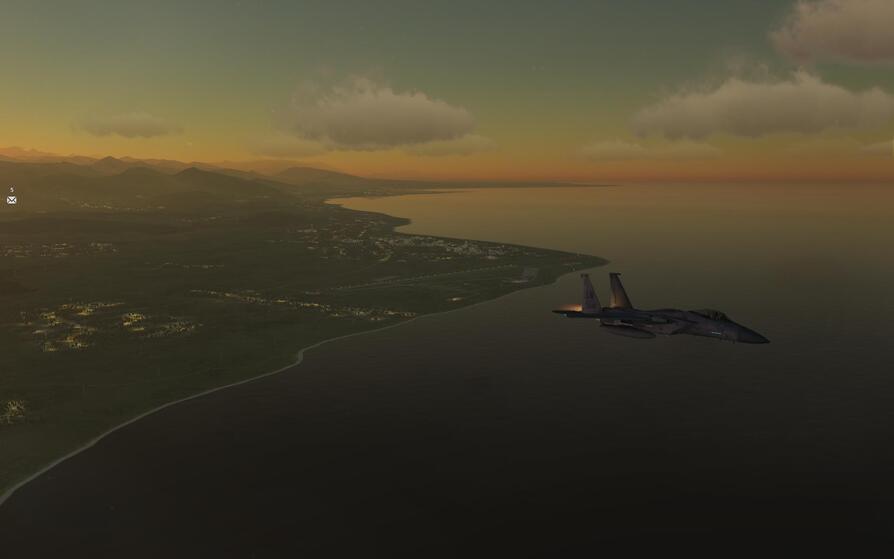 That was quite the fun mission! I love being part of the whole group; all of us working toward a common goal, playing our parts, firing our ordinance!

The flights taking off from Gudauta did an excellent job minimizing the confusion of taxiing to the runway. We had 3 flights using the same airfield and I am pretty sure that taxi operations went off without a hitch!

These shots are from my position in Enfield 1-3

vlcsnap-2016-04-16-18h15m09s107.png1920×810 817 KB
The SEAD flight displayed good form and courage, executing a section takeoff while the first of the strike packages (which I was in) opted for individual takeoffs to reduce collateral damage.

Some other shots during a early test run of the mission.

I apologize, as I’ve lost track of who is who in most of these.

Unlike @Fridge who got the first two parts down, but would shortly fall victim to a vengeful SA-6.

AGAIN! I want to do this AGAIN! Except this time, I want to fly a M2k and someone else can do AWACS - they’re sure to do it better than I!

https://forums.mudspike.com/uploads/default/original/2X/2/24e0f3f1a038e542d9fc1708461ceb9db9eb194f.png
Iron about to come off the racks. No idea if I actually hit anything at the target but I guess I would have ruined a few pairs of pants at the very least.

Big thanks to @EinsteinEP for taking on the AIC role, it was definitely a huge help!

No screenshots from me as I was completely overwhelmed at the controls of ENFIELD 1-4 (AKA “Lone Survivor”).

It started well enough, with everyone arriving at the runway in flight order without a hitch and a discussion on the fiscal responsibility of drop tanks in the current economic climate. Apparently, I’m not as aggressive on the power as my colleagues in ENFIELD 1 so spent a few minutes chasing them around the marshalling point before I could form up.

. On the positive side, this did mean I got to inform @Fridge of his promotion to flight lead

Ingress was pretty uneventful, I watched tracers pass harmlessly over @Fridge as we enjoyed our tour of small Russian towns. However, my RWR was bleeping like an alarm clock the whole way, which served as a reminder that @near_blind is evil and any feeling of safety was only going to be fleeting.

Pop-up and attack was more “eventful”, I was about 1.5 miles behind @Fridge so I saw him rolling in on target and a successful hit while the whole city shot at us. I followed his line and dropped my MK-82s on the smoke from his attack, then turned north without a rearward glance.

Due to all the jinking, chaffing and flaring, I ran a little long on the roll-out from target and ended up crossing the airfield North-South on my way out. Luckily for me, but less so for @Fridge, someone had depleted the ammunition of the SA-6.

At that point discretion was definitely looking to be the better part of valour. So I decided to drop tanks and followed the flight plan back to Gudauta for a wobbly landing and a very stiff drink.

Waiting for the start

I took some more screenshots, but I thought it’d be cool to show of some tacview stuff so the people who did not attend can see how it went. Or perhaps shock some people who where actually there

Plenty of AI action going on before any of us have taken of to guarantee the RWR goes nuts. 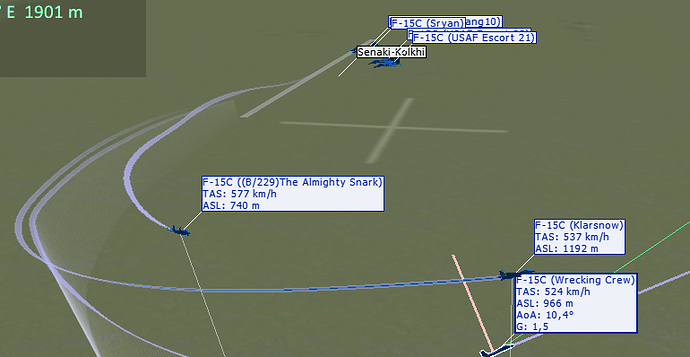 SEAD enroute from another base

They never eliminated that flight… Let’s hope that won’t backfire on them. For now it seems they got bigger problems. 2 SA-10 Grumble missiles are inbound. 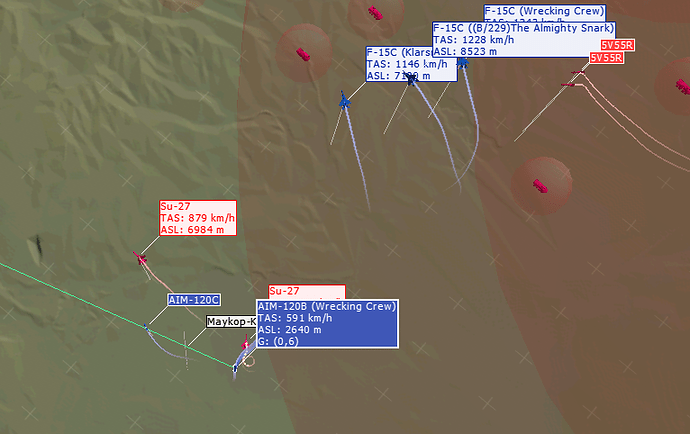 The flightlead got seperated from his wingman, He is giving chase to one of the flankers but the other flanker has similair murderous thoughts.

Current picture of the AO. The sweep flight got seperated. The escort is flying a few miles ahead of two inbound strikers. SEAD is northbound.

Valiant last defense of one of the frogfoots

I remember this time in the flight! I called out to my flightlead “Contact Visual Su-25 Frogfoot front, probably friendly”. 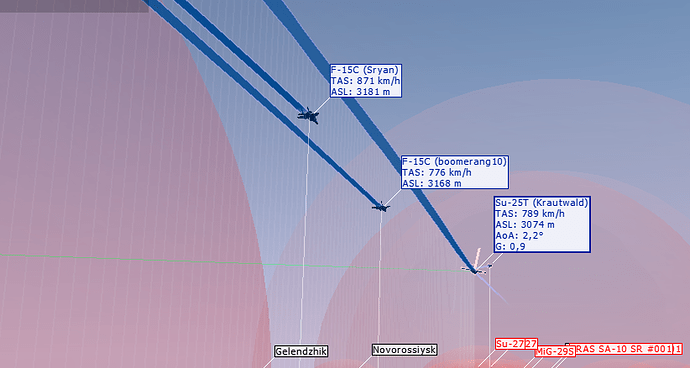 We decided to run for it, what better place to hide than the WEZ of another shorad system?

Toppometer and fridge entered the heart of darkness. Word is not everyone made it out of there…

I wonder if toppometer knows how close he was to dieing at that moment. 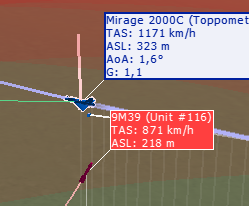 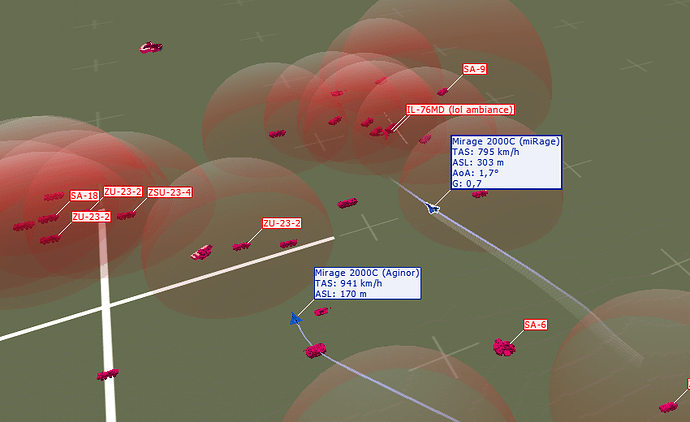 You gotta think twice before you think you can shoot this guy down easily. He also dodged the SA-18 shot 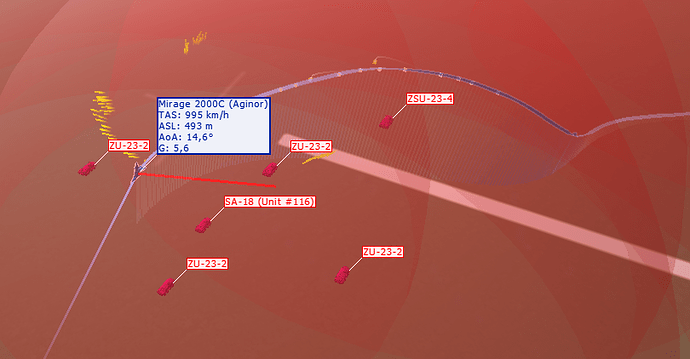 Navynuke is the last mirage to enter and is seen hard at work on delivering an order of a load of pain.

There was only a single SAM visible along the coast. Someone managed to find it, though. 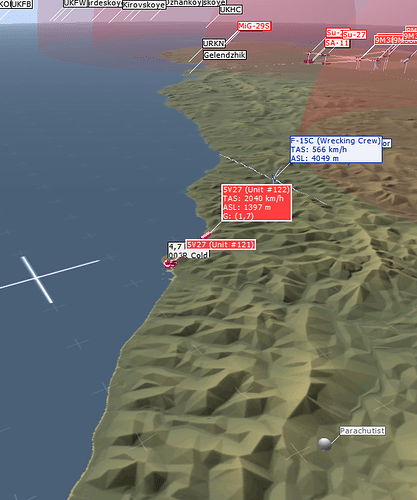 The day would claim one last victim as I slightly panicked overtaking Boomering on the landing roll. 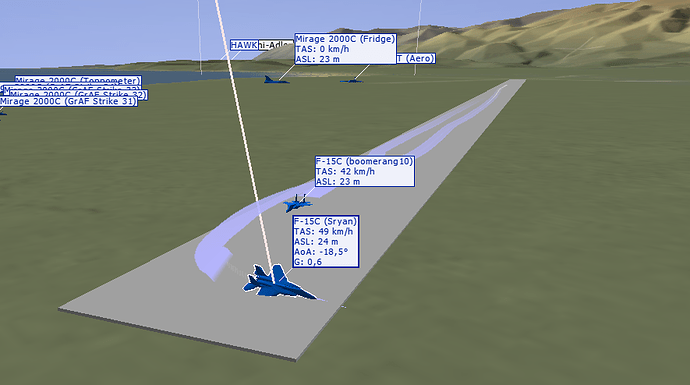 Thank you everyone for the wonderful night!

This kind of activity shows a couple of things:

1- the product is there and it looks positively gorgeous.
2- with the right combination of people and spirit it can be immensely enjoyable
3- there’s so much awesome coming up within the next few years
4- I really need to train again

Cheers guys and thank you all so much.

I wonder if toppometer knows how close he was to dieing at that moment.

Thanks to all for the kinds words re: my AWACS/Air Intercept Controller, but I definitely need to brush up on that. This exercise showed me how critical that role is and how quickly saturating it can be.

I gotta say, I was a little disappointed I didn’t get to fly this mission, but looks like fun was had by all.

When are we doing the next one?

Speaking of Falcon, I move all future AIC be callsign-ed Chalice.