Yes, the basics are there in the manual provided - but for things like the new mining system, I need specifics.

When I started doing the planetary landings, most of it was just guesswork and ‘suck it and see’. Luckily for me, it worked out okay. But I failed any missions on the surface of planets, because I didn’t have a clue what I was doing, and the videos I watched were not clear enough. Seems most of the video makers were making a number of assumptions about what people already knew.

Yeah, thanks, that is a nice livery. I used to use the Viper for mining in the ‘old’ days, because it was one of the easiest to catch stuff in the scoop with, and was potent enough to ward off the odd nosey bugger.

I mean the way they changed it with the Horizons update. Before you used your laser to cut away the ore from the asteroid, then collected the chunks in your scoop and put them into your refinery.

After Horizons you had to buy some drones or something that go out and collect parts and it seems you can somehow use a device to tell what the ore is before you even collect it (or maybe what’s in the asteroid before you cut it).

I’ve only ever seen general descriptions of how it works, and I really don’t want to have to watch videos until I find the one that does explain in detail - I already watched a few. A manual telling us exactly how that works would be so much better.

If there is one, I haven’t found or heard of it.

Well, you’re talking about the limpets.

It couldn’t be easier.
In one slot of the ship you put the limpet controller (imagine it as a flight director) then in another some cargo hold.

According to the limpet controller type they will perform a different task.

But it’s all in the manual, really…

If there is one, I haven’t found or heard of it.

Oh! I actually did a bit of a guide on mining in a post here last year. I’ll see if I can find it for you.

Mining in Elite Dangerous OR: Making Big Rocks Into Little Rocks For Fun and Profit

Incidentally, komemiute, I printed out the manual and read it - more like a general guide than a manual - it says what can be done, but it didn’t say how to do it. Unless it has since been updated - I’ve not done much in ED this year yet.
I also downloaded the 4 or so tutorial videos that FD made for various things - but they didn’t cover mining and the planetary stuff only covered landings etc and not the details about different types of missions you come across, which left me unsure of what to do, so I just didn’t do those missions - though I’d like to.

I watched a fairly good video about attacking places on planets and knocking out turrets and getting info scanned or transmissions (can’t remember) - but although he said “do this, then do that” he didn’t tell us how to do this and then that.

I’ll be back in game I think by next month. If you don’t mind waiting a few days after that for me to fly back from Colonia (or if you want to come meet me out there), I’d be happy to show you the ropes.

I might remember badly though…
I’ll check when home.

That’s a good idea and nice offer - I’ll see if I can upgrade to the Explorer and head over your way (I’m currently in the beta “Home” systems, Assellus Primus, etc).
One thing’s clear, though…

A Cobra makes a great explorer if you can’t afford an Asp. My first explorer ship was actually a Type 6. Loved my Wanderbus.

I usually have a spare Cobra - but at the moment I only have enough for one ship, currently the Diamondback Scout. If you are a long way out, upgrading to the Diamondback Explorer would make sense, as it has long jump range. I can switch to something else when I get closer to you.

Hop on some of the websites and make sure you can find what you need for other ships and modules around Colonia. I know there’s a lot more out here now, but I haven’t been in game since mid January.

Is there a Mudspike group?

Hmmm, can’t see me meeting you anytime soon! I checked and you were some 22,000LY away from me at the start of the evening - won’t be that much less now, either.

I only had half a mil in credits, so did some jobs to get the cash up to enough to buy the explorer - just got to find a station that sells one, now.

Thrudds was certainly no help - a hold full of silver and going from one recommended (by Thrudds) station and system to another, until the 4th one turned out to actually make a profit - but only just - 2.450cr. Whoopy-do!

So next time, I’ll see about grabbing an Explorer and then we’ll see how many weeks it will take to get to Colonia (currently at Beta Comae Berenices/Gresley Port)

You’re in luck. Like I said, I’m out for at least another week or two, until I finish moving and getting stuff set up.

I was working it out today - with an empty cargo hold and a decent FSD it will be around 880 jumps to reach Colonia.

That’s not counting how long it takes to work out a route!

Dont forget the neutrino highway. I am guessing someone has mapped them for you to plan a route on the internet. Gives good boost to your fsd 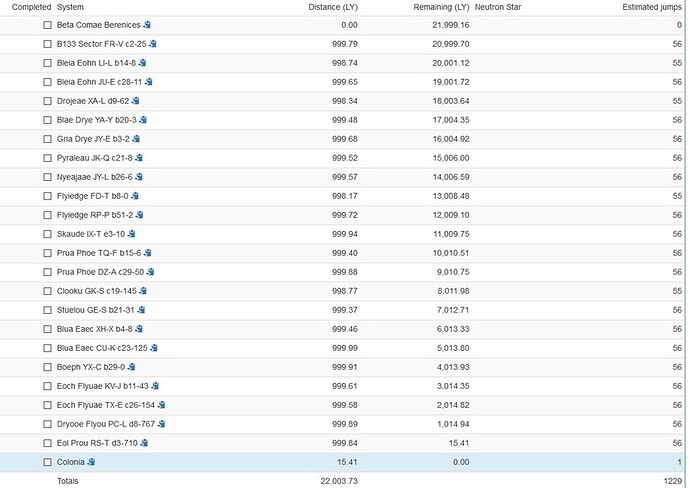 I’ll get started later and, well, see you next year!

Never heard of a neutrino highway!