Now the most recent version was on sale on Steam last weekend and I am now an older man with two kids who love animals, tractors and such stuff, so… I bought it for ten bucks.
And guess what: It is kinda fun. Probably not a game I would buy for 50 bucks but for ten… yeah. I have a small farm running now, currently doing some logging in the nearby woods while the wheat grows on my fields. I need the money for a new trailer.

IMO it is more fun than Spintires because you can just do more different stuff (and don’t get stuck that often). The series also has a huge and very active modding community, and the developers support that well.

@weaponz248 did an AAR about it some time ago, here:

Welcome To My Farm, A Farming Simulator 2017 AAR Screens & AARs

Love this little sim/game. Its fun and relaxing. So without much more come on down to my farm and take a look around. My truck outside my house, [image] My beet and extra straw storage area, Planning on getting some cows so I have an overload of straw at the moment. [image] Around the house I got 5 fields that I use, Here is where I store my tractors and equipment, I plant whatever is needed for the animals [image] My combine and fertilizer spreader [image] Got my straw trailer and my…

Anyway, the next version was announced recently, and man it looks cool. It has improved graphics and physics, new weather, new tractors and stuff to play with, new crops (cotton for example), you can now breed horses and ride them, have a dog, you can now place more of the buildings of your farm yourself, and more good stuff. It also has an improved Multiplayer mode, new maps (two or three on release, a US and a European map), and it will be released in November for PC, XBOX, and PS4

You can also find some gameplay videos from gamescom on Youtube:
https://www.youtube.com/results?search_query=farming+simulator+19

…I probably have to get it, my daughter will love the horses.

I wonder if we should try and get a server running after release, and farm or log a bit together, or just horse around.

The truck simulator / Spintires fans among us could drive around, delivering the goods for the farmers.
Just an idea.

So who of y’all is interested in that kind of game and would consider that?

So FarmSim 17 is the high hours holder on my steam account with 19 having a bit less, so you are not alone here. I’ve never mucked with MP for FS, mainly as my available free time comes at odd times. With the new MP their talking about where everyone has there own little plots, etc, I think that could be workable.

19 looks like it will be great. The way they are doing farms now will make MP even better. Only down side is I think there will be a limit of 4 farms on MP. But still interesting none the less.

If I get a new graphics card before 19 releases I’m down for some MP, If I dont get a new card I will have it on Xbox.

@Aginor If you are looking for a challenge in 17, download the Seasons Mod. It added a whole new complexity to the game.

I took a quick look at the mod but deactivated it for now until I know my way around the base game.
Pretty nice so far though.

I have been playing this for a week or so and love it! I’m at work thinking about my farm and what needs doing!

I started playing Euro Truck Simulator 2 a few weeks ago with PS4 controller and then got a steering wheel and pedals and driving it every day, getting all the DLC. Then I looked at OMSI 2 and loved that too, then reinstalled Train Simulator 18 and loved that again (and since bought Train Sim World which I can recommend too), then I started searching for other simulations and saw Farming Simulator 17 and bought it.

I have the Chellington Farm 17 v2 mod for the UK farm and I love it, can’t get enough. I was really going off games as they were all the same AAA crap being churned out every year and my PC wasn’t running DCS World (I still have Falcon BMS running great though) but I think I’ve found my niche in my 47 years of old age

I’m currently harvesting my first field and had to try out the baler whilst half the field was harvested and now back to harvesting lol. It is just so relaxing and has really peaked my interest in games again. I was explaining to my better half the other day it’s like when I was a kid and I’d have a massive train setup in the loft my Dad had made me and had a big farm set up and played with lorries (sorry trucks lol), it’s like being a kid again but with grown up toys. She gave me a strange look and rolled her eyes lol

Not a fan of Seasons after I put some serious time into a map with it. I love the idea, but it changes the pace of gameplay for me and not in a good way. I play at 5x time, so it takes over a full real world day (8+ hours) to get through one full season. You need an immense amount of field space and small machines to fill your time up doing work in the fields. You can break this up with animal husbandry, but with the changes Seasons makes to the general flow there once you get things up and running it’s a lot of waiting around.

I appreciate what it does, but it just didn’t work for me and the way I like to play the game.

I think I’ve officially hit new nerd levels as I had a thought about how cool a DCS level farming simulation would be with the tractor, harvester etc cab fully modelled and operated as if you haven’t seen the real thing they are pretty complex these days (“alright grandad!”). Thrustmaster would bring out a John Deere 6145R controller that would be the size of your desk lol and pit (cab) builders would create replicas

No? Just me then… lol

So, did anybody pick up Logitech’s Farm Sim hardware. 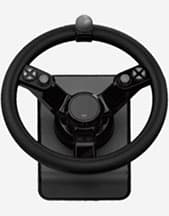 Enhance the realism and immerse yourself in farming, tractor or heavy equipment sims with Logitech G farm sim instruments, panels, and controls.

I picked up the side panel. Comes in very handy and works great with ATS and ETS2.

Oh nice, they’re producing those again? They were super hard to find for a while. I’m not going to get one but I see the appeal.

I was going to get one for my son but he told me he prefers the controller and doesn’t want to change. Which is irritating as now I have to think of another birthday present in November

I was thinking about that side panel for a while but so far I have been able to resist.

…it could come in handy in various VR games though (including flight sims, as a weapons panel for example), as it is pretty well usable without looking at it I think.

An unexpected benefit of having 2 PC’s and X box game pass.

Obi Plays FS19 on Epic and I downloaded it from XBGP meaning we can farm together! because I love nothing more than doing a 15 hour saturday night shift followed by more driving on FS being ordered around by the most demanding boss I have ever known. I have no mods installed so its vanilla only for now but its SOOOOOO much fun playing together. 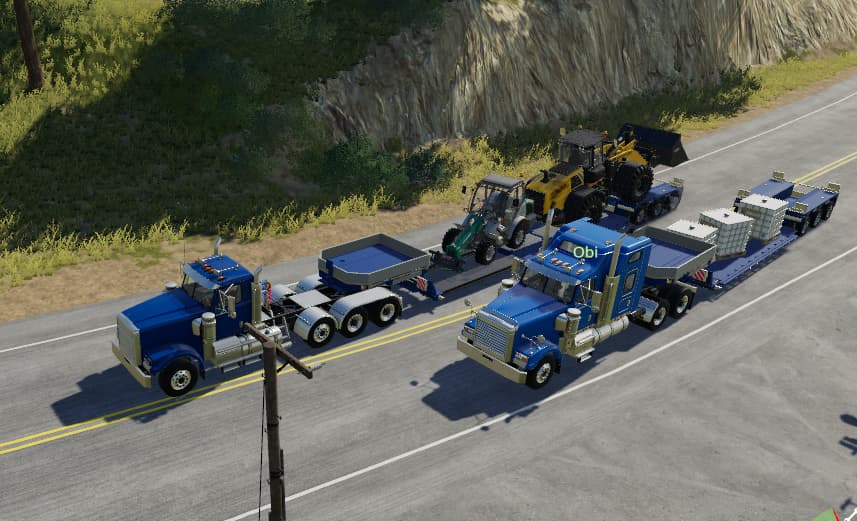 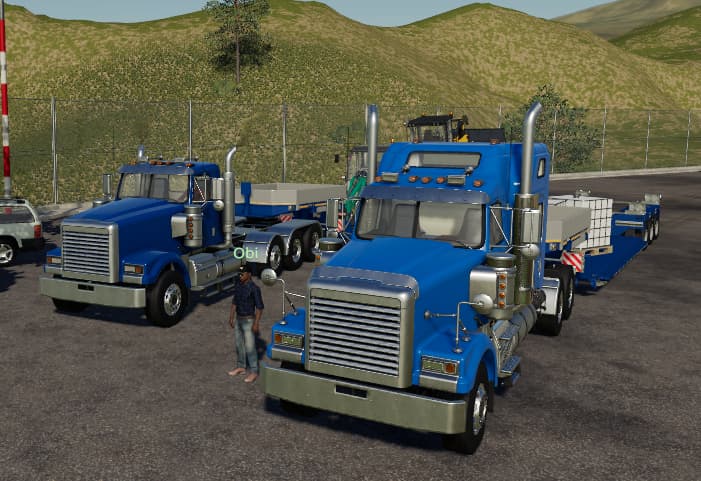 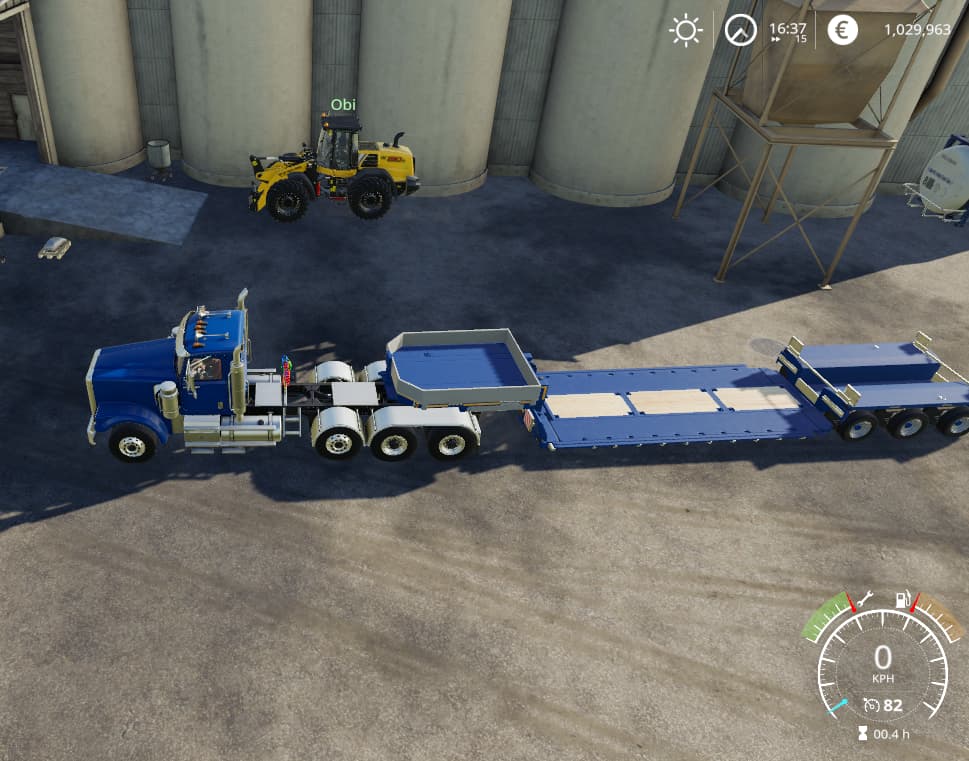 Today or Tomorrow(depending on where you are at or where you bought it) Farming Sim 22 comes out. Looks like an impressive list of features, One of my favorites is cross platform play.

The boss ordered it pre bought for him. I’m looking forward to the seasons. Should be a nice change from perma-summer and make for a bit more interesting play

Looking at feature list, not sure the upgrade is worth it for me. I’ll probably give it about 2 weeks and then cave and get it lol

not sure the upgrade is worth it for me.

I agree. Its not as great as first looked. My main problem was its advertising has coincided with my boy Learning to read. Hence me being forced to upgrade lol

My kids also force me to buy it.
#firstworldproblems 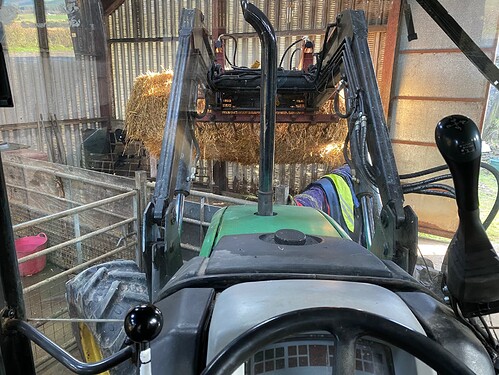 Contract - Dropping off a straw bail for the horsey ladies who livery in the barn. Needed to be in for midday.

I’m not happy about the placement of the gates and think in real life, nobody would be stupid enough to do that. I had to use the JCB mini digger to move the bail to the right place.

I also note there was a problem with 2021 and the 3300X John Deere, in that the clutch failed when I was in the lower field and it took 25 minutes of coaxing to get back to the barn. I needed pay to get Dai out to pick up the tractor and it took 5 days to fix.

Has anyone else seen this issue?

Has anyone else seen this issue

I had to condemn our Deutz-fahr (airfield mower) due to a clutch problem mashing the chocolate constructed gearbox last month. They have since updated to a massey