Well, Fighter Ops didn’t have playable content, did it?

Which is why I made the correlation between the two.

Anyway back on topic

Oh come on, that’s not fair. SC has playable content.

But yeah, let’s discuss that over in the SC thread.

As for the Tomcat: I want to see more of the RIO cockpit and its functions!

There was some drama earlier this week where Wags seemed to indicate in a YouTube comment that it would be out by the end of the month. 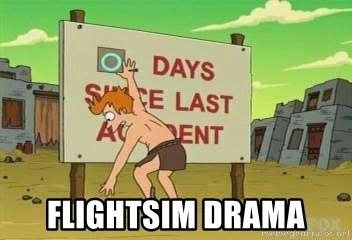 Lol, And it will ALWAYS be that number.

I paid for this a long time ago… take your time, I want it right.

Counter point: I paid for this a long time ago as well. How come ‘content creators’ get to take it for a pre-release test drive but I don’t?

Counter point: I paid for this a long time ago as well. How come ‘content creators’ get to take it for a pre-release test drive but I don’t?

Do you have a large audience of followers with interests proven to be broadly aligned with heatblur’s product who might be enticed to purchase it? Because that’s why they have it. Those aren’t test drives, they’re PR demonstrations.

I predict the F-16 will be out of Early Access before we see SC.

Marketing for flight sims has always been an uphill battle, these videos are a better way than the past of a couple of screenshots and some words in a print mag ever were.

I don’t begrudge them getting to mess with them with more bugs, warts, and missing areas than we will need to deal with.

It’s gotten to where I dread reading people’s reaction to a delay far more than the delay itself.

Project timeline estimation is difficult, and the fact is dates never get moved up, only pushed back. I can live with that. But listening to a vocal minority of over entitled people treat a project’s delay like it’s some sort of conspiracy by the devs to ruin their customer’s lives, that drives me nuts. Hoggit, I’m looking at you here.
As if the guys who were putting in 80 hr work weeks trying to get a module out the door really wanted to keep working on it forever. The reality is that delays are frustrating for all concerned, but in the end, it’s their baby, not mine, assuming they haven’t taken my pre-order money under false pretenses.

How come ‘content creators’ get to take it for a pre-release test drive but I don’t?

Simply because it isn’t ready for pre-release. Nobody has shown the rear cockpit yet because it isn’t ready. Content creators generally have proven that they can abide by the developer’s requests…it is basically like being a beta tester that is allowed to show stuff with an NDA that is only given in trust. I never signed anything, and was just asked politely to avoid showing things that weren’t done.

And for me, I’m lucky to get an early look at it because I write for a magazine that has a very long lead time. From article submission to newsstand is nearly 6 weeks, and in some cases a couple months. So for me to be able to run a preview article that won’t show up for a couple months it is nice to get things a bit early. With my article submitted, I’ve backed off showing much more simply because I do think it is nice for people to get a fresh look at it out of the box so to speak. I’ve only watched a few minutes of the posted videos, because I actually am interested in experiencing the module as Heatblur intends it for mass release too. It sounds patronizing (and if it does, I apologize), but the full community wide release will be a better experience for you and everyone else than what we got with regards to the impact it will have right off the bat. I’m jealous of you for that.

Nobody has shown the rear cockpit yet because it isn’t ready… I never signed anything, and was just asked politely to avoid showing things that weren’t done.

So your body wasn’t ready and you never asked for this?

So your body wasn’t ready…

I wanted to lose 20 or 30 lbs. before I saw myself in the back seat. Otherwise my blubber hides the side panels…(probably an ejection seat limitation too…)

OK, now you have to have a skin where the RIO’s cockpit has “Porkins” on the nametag.

You know what is really nice for me? I haven’t flown the Hornet since I previewed it (almost 9 months ago?) and it has made huge leaps in functionality and bug fixes. I’m really excited to revisit it as a more complete module. Same goes with the Harrier. It’s almost like I have unwrapped gifts under the tree…

Same goes with the Harrier.

I keep my money at EDB (Eagle Dynamics Bank). I know that it is safe there, because it is immediately converted into rubles which have little value at the local micro brewery

It’s gotten to where I dread reading people’s reaction to a delay far more than the delay itself.

Yea I am right there with you on this one. I am a Project engineer for my company and I regularly get to watch Project Managers faces run through the gamut of sad/angry emotions as I explain to them the myriad reasons why we can’t bill the project until next week. Then I come home and open up the internet and read hoggit and reddit posts of unbridled anger at the two week delay of a software rendition of the MIG-19. And I always think the same thing - Dude if you can’t wait two more weeks to virtual fly a MIG-19, what’s it like going to the Denny’s with you. When the wait person says your eggs will be right up, what’s that moment in time like?

Same goes with the Harrier.

Hasn’t RAZBAM added some features to the Harrier in the past year or so? I played with it for the first month or so but haven’t been back since. Doesn’t it have a HUD FLIR or something and some other stuff that has been added? I haven’t kept up with it…

Yeah…all this stuff…I hadn’t seen any of this since I played it just at release I think: