How to get started with a HOTAS? Q

Don’t forget that you guys can do screen share with the Mudspike discord.

OK… I’m sure it’s user error but I have programmed 2 hat switches on my stick. One to the was up/down/left/right and the other too the cursor to operate on my TDS, with the activation on the C button on the right side of the stick… neither work in game, forcing me to use my TrackIR to peek left and activate.

So, what am I doing wrong? Any ideas? thx

I’m missing one thing in the video:
when you click the cell to bind the control, click ‘ADD’ and you press the button or hat on your HOTAS, does DCS ‘fill in’ the button number?
I see there are 2 columns named “Saitek Flight …” so the one thing that might have gone wrong is binding it to the wrong device. Otherwise, I don’t know.

Any AH-64 drivers got anything to add? I don’t own the thing and it’s pretty complex so I can’t say if there’s any operator error of the helicopter. DCS controls interface looks good

@Magnum50 if this does not result in any help, you could post the vid and question to the AH-64D thread we have

if the controls are bound, in the settings page if you press the button on the controler it should highlight what that button is biound to …

Looks like you got WAS programmed right. I use axis commands and mapped the cursor to my ministick (the X56 has one on stick and one on throttle, pick whichever), so I’m not sure how well a regular hat would work but I think it should work somewhat.

Now you say “peek and activate”, what are you using to do that? I can look around all day but the movement of my head is meaningless to anything except the mouse cursor if I use that.

One other tip–once you map a hat/button/switch, when you press it in the controller window it will snap to it. So if you map trigger to fire and then you’re at the WAS area and you click the trigger, it will scroll over to the fire setting and highlight the button there, proving that action is assigned to that category.
You could try moving that hat up/down/etc and make sure it moves to the WAS spots you assigned.

@Ragnar what does that achieve? Genuine question as ive never had to do this nor heard of it. Having those windows open in the background wont make any difference to DCS that i can think of.
Happy to find out more though,

Thats interesting. Never come across that before.

I had an X52 standard before and that was the same deal, I found the solution in one of the DCS forums about 2 years ago so it is not specific to my rig / setup

OK, after taking some advice here… still what am I doing wrong? WAS-UP is programmed to a hat switch (up) switch, you can see it jump to setting when I hit up, so it’s programed and working but not in game.

Quick, 40 sec to the point… been stuck on this step of the tutorials for 2 weeks, lol.

WOW… I am such an idiot. I probally shouldn’t be allowed to fly this sim.

After testing your advice temp, that wasn’t it… but then I realized what it was and now wish I could delete all this crap and go back 2 weeks in time.

I programmed all those keys to the pilot, (because it worked in the pilot seat), I haven’t programmed crap into the co-pilot seat. And that’s where you start that tutorial in.

Thanks! and OUT. lol

OK, I’m going back to tactical shooters… my wheelhouse, lol…

So now it’s properly programmed to the CO-pilot/gunner, and now WAS-UP activates when pushing up on the hat switch and/or the keyboard… but the tutorial never goes forward. lol

Thanks, but no thanks, I’m retired… don’t need this stress. lol 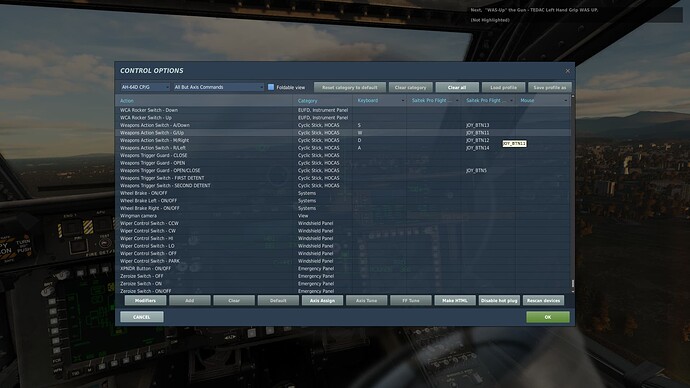 Note with those tutorials there is a timing thing. If you do things too fast/close together, it may not register.
It’s annoying, but better than the earlier days of DCS when tutorials were just in-game videos you watched, it wasn’t interactive like they are now.

So maybe try WAS right and then WAS up again?

Wrong switch @Magnum50, for the tutorial to advance you have to use the one on the TEDAC grip: 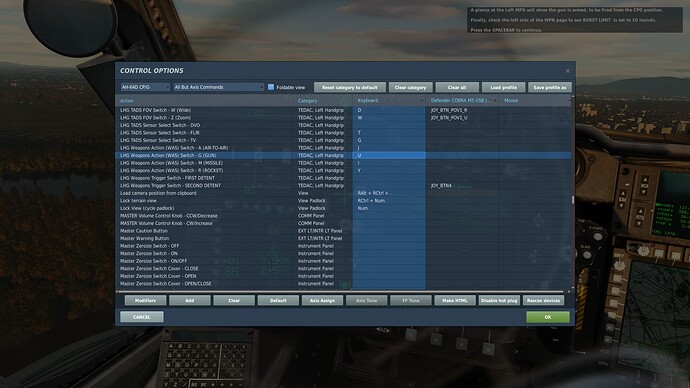 In actual gameplay, yes either WAS switch accomplished the same thing, but the tutorial keys off the TEDAC switch.

Thanks, your right… but I got to know… how in the hell is a regular gamer, like 80% of us probably supposed to know that. lol… and even with a keyboard and HOTAS there’s no way to program all those 'required" inputs. lol

Just asking for fun, no reply needed… Packing up my $300 HOTAS and sending it back, will play FC3 with my simple flight stick.

Gaming is supposed to be fun after all.

I put them here: Required keys in the Apache AH-64D question - #12 by jenrick, there’s about 40 keyboard shortcuts total (with a lot of repeats between P and CPG) that I can run on laptop keyboard and my cobra which only has 2 hat switches, and a couple of buttons. I have yet to run into anything I can’t do in the Apache currently. Compared to the default A-10C key binds it’s a piece of cake to learn (and to setup). I get if you really just want to get back some FC simplicity, but I figured I’d leave this here in case at a later point you want to try the Apache or some else is having similar issues.

Don’t forget game mode for the AH-64. I’ve not tried it, but it would at least let you fly the thing without needing to go through so much hassle.