I see what you did there

Apologies for taking this thread way off topic. I have so many stories from the that GP - some amusing, some a bit risque, some surreal (like attending the ball). Feel free to PM me if you would like to hear more.

To help get this thread back on topic, I would like to share my thoughts on tank gunnery IRL compared to GHPC.

Disclaimer: This is all from the perspective of a former Leopard 1 gunner and I will restrict my comments to 105mm ammo and 7.62 coax. I have fired just about every nature of 105mm ammo - APDS (we never had 105mm APFSDS), DS-T, HEAT(prac & live), HESH/HEP (prac & live), WP, APERS/Splintex.

Visuals - It is very close, the key difference is that the ‘flash’ from a sabot impact (including DS-T) is much whiter and brighter IRL (i.e. more like a camera flash). Obscuration on firing is a lot less pronounced in GHPC. IRL, with DS-T it was often quite difficult to see a hit because the round had impacted before all the dust had cleared. However, when firing APDS against hard targets it wasn’t as much of an issue because the ‘flash’ was so bright.

Accuracy - Dispersion in GHPC is much less than IRL, especially with HEAT. Speaking of HEAT, it was the one round that we actually rarely used. Dispersion/Accuracy was one reason (probably to do with the fact that it was fin stabilised but fired from a rifled barrel, even if it did have a rotating driving band). The other was that it was a barrel burner, 1.75 EFC if I recall correctly. 105mm HEAT was withdrawn from service around 1990. After that, for armour there was APDS and HESH for everything else.

There are a number of IRL factors that come into play here: barometric pressure, temp, crosswind, etc. Even though the Leo AS1 had the SABCA fire control system and took those variables into account and they are possibly modelled as well as can be in GHPC, there are two key variables that probably aren’t:

The coax - This is probably a Leopard specific issue. coax stoppages were common - but the MG3 was always a fussy ■■■■■ due to the ROF.

Edit: Another thing I will have to check with the coax is that IRL ‘tracer burnout’ is approx 800m and at that distance the tracers are about 1m above the ball rounds. This should be independant of the gun?

Ok, you are my new favourite person @Harry_Bumcrack

That was brilliant to read. Thanks

Brilliant read… thanks for taking the time to write that.

Don’t worry about de-railing topics, you can always split the side discussion into a new topic or ask one of the mods to do it.

I like to think that DCS lets me live (vicariously) the life of a fast jet pilot, but because I aint “been there, done that” I rely on those that have to fill in the blanks.

My opinion, for what it is worth, is that GHPC is probably the closest thing to sitting in the gunners seat that has been released so far. Sure SB models systems in greater detail but for visuals (graphics) and intensity it is GHPC for me.

I have so many stories from the that GP

you can always split the side discussion into a new topic

Oh man, that really brought back some fond memories

I served 10 years in a Leo1A5 squadron, most of the time as gunner. Best job I ever had, looking back at it.
Fully agree with the driver being important for accuracy, as any added turning when Dynamic lead is pressed, will throw the lead calculation way off. And also a thing as keeping a proper distance to trees and power poles, if the gun is over the side, as commander and gunner is focused on targets. We did clip a pole that way once, turret brake did not sound happy, ha.
We once fired a APFSDS right into a sanddune we passed by, at point blank range! Man, we had sand everywhere, and ofcourse missed the target completely. I could see over the dune in the GPS, so never noticed a problem

Thanks for taking me back down memory lane Harry!
Stab Ein! We’re moving out!

Hello brother. What Army, if it isn’t too presumptuous to ask?

And talk about taking a trip down memory lane… I started as a driver (we all did back then) and learnt very early on to keep one eye on the ‘barrel position indicator’. One guy in the squadron forgot that lesson and after a barrel strike that sheared the drive cog pin found himself doing 12 extra guard duties.

Stab Ein (On). We only used that when moving. From a static/stationary position we always turned it off. Meant we had to manually re-lay after lasing and/or using lead lock, but it was impossible to trim out all the drift.

I have so many stories from the that GP

Be careful for what you wish for

Tracer burnout for coax isn’t modelled, neither is the difference in trajectory. In the screen shot below it shows how the tracers follow the same path as the ball rounds, which you can also see (something that bugs me a little bit). 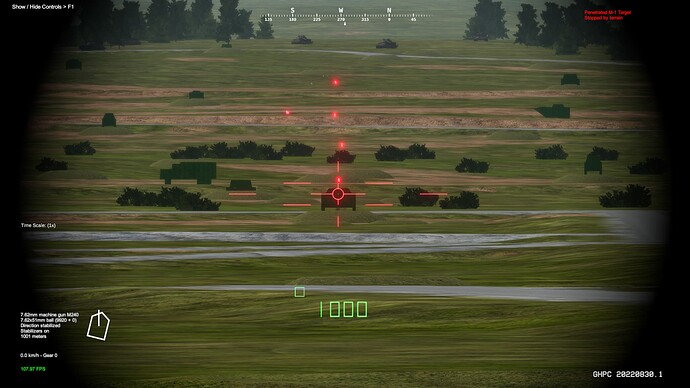 This next shot also confirms that tracer burnout isn’t modelled and although there is some dispersion, the ‘beaten zone’ at 1890m is nowhere near as large as it would be IRL (1100m was the max range for coax on a Leopard anyway). 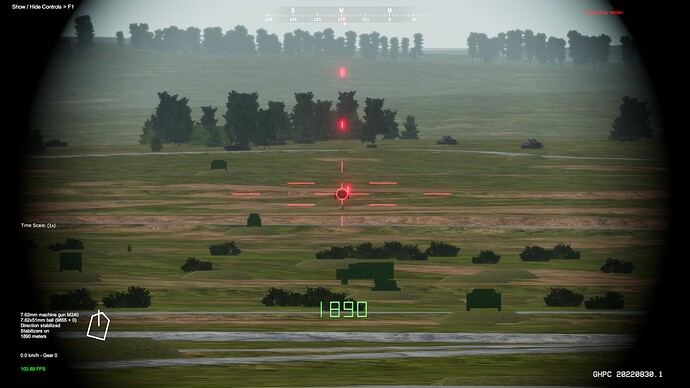 Edit: To be clear, I’m not actually complaining. I realise that it would be difficult to code different trajectories and tracer burnout. I just need to adjust and aim ‘centre mass’ with the coax rather than top edge like I was trained. I would like to see more dispersion though, especially for the coax and main armament rounds as well.

I’ve been meaning to post how much I’ve been loving playing this game now that the full version is out.

The atmosphere of your TC screaming at you to fire, the way he actually talks you on target, the simplicity of the controls, it’s all a great package. Very well done, and much more satisfying tank action than Arma 3, as surprising as that sounds.

I wish it had interiors (although I acknowledge how much more work that involves), animated crewmen and infantry units, and that I could fire the TC’s .50 on the M1. That’s about all!

Question for those tankers who might be in the know: Did the original M1 circa 1985 actually have an M240 at the loader’s hatch? For some reason I thought that came much later…

ETA: Okay, a couple more things it needs:
The commander’s ability to launch smoke screens- pretty important for a modern tank, and a component that’s been around for a long time.

The TOW gunners need a commander to spot targets for them like the tanks have*. The TOW is not a one-man weapon, it’s always going to have a team of 2-3 soldiers operating it, if nothing else just to carry the thing. So give me a commander to help out.

Units need the ability to retreat off the line/commanders need the ability to order this. When my M60 TTS is reduced to an armored bulldozer without the blade, it’s job is to carry itself off the battlefield so they can hose out the TC, gunner and loader, not to keep fighting until it’s blown up and the unfortunate driver shares their fate.

*“Commander Aim” took me a long time to figure out what it does. On the M1 and probably every other tank in the world (maybe?) the TC has the ability to grab control of the turret and traverse it on target. In the game, if the TC’s yelling “Gunner, Sabot, Tank!” followed by “Traverse LEFT!!” or “HE’S LOOKING AT US!!”, I simply give up and press space and the TC AI will automagically slave the turret roughly onto the target. Works pretty well, and I know it’s ‘a thing’ because the Team Yankee textbook of modern tank warfare told me so. If you feel handicapped by looking through a straw (albeit with thermal), try that.

Ah, another game I can’t afford NOT to play.