The DCS 2.5.6 lighting engine sure looks good, look at those reflections!

@chipwich, how long did your order take from clicking buy till delivery?

I just ordered me a stick and am anxious to start fitting it to my home pit.

The DCS 2.5.6 lighting engine sure looks good, look at those reflections!

The Blue/Green/Red dithering is very poor, reflections are all wrong - yet another reason to complain about the current state of DCS / Reality. This is probably the F-16’s fault…

Can that lil side lever be used as an axis, or is it a friction-thingy for the throttles? LIke, say for the nozzle lever for the Harrier…

Yes. There is also another slider/axis on the front left side of the right throttle grip, that took me a while to find during calibration. If your left hand is on the right throttle, your ring finger rests on it. So in all, 4 x axis or sliders, one more than the TM WH.

BTW, fire away questions and I will attempt to answer. Still very much in exploration mode.

Download the latest VPC Joystick Program here. The current release is 20200204. I uninstalled the old version before installing this one. Without it, your throttle will not be detected and you won’t be able to update it or the MT-50M2 base to the latest firmware.

Chose Pro setup over Lite in order to have access to changing the color of the 6 x buttons. Here are the default color options. Obviously mine are too bright as seen in the image a few posts earlier. My RGB were just a method of delineating columns. Will probably change as I determine what the functions will be. Seriously, there are so many buttons and switches on this damn thing, chipwich’s old head would undoubtedly explode if I began using Modes (5 of them!). You can also let your throttle command Modes to your stick as well. 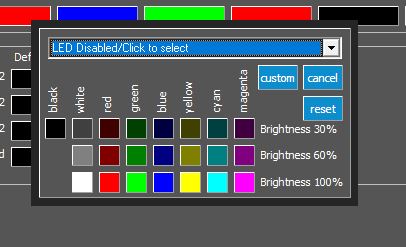 You will need to build a profile (not the same thing as a TM profile) in order for the switches to work. It’s harder to explain than do, and I suggest that you dive in and tinker. Also, run through the calibration during Profile build for axis, then go into Windows USB game controller (linked within VPC software) and calibrate there as well. VPC first, then Windows. You will thank me later when trying to A2A refuel the Viper.

If anyone is interested, the 3 x metal toggle switches are momentary, and the four red switches are latched. I understood this incorrectly when ordering, but now that I have the little beast in hand, prefer it this way. Much easier to program these for Landing Gear, Hook, and Fuel Probe. For flaps, I’m using the 3 way switch on the front of the left throttle grip. Works intuitively.

The mounting brackets that VPC make to attach this throttle to a TM WH mounting plate are out of stock. I used 2 x 2" inch wide strips of industrial Velcro to attach. The stuff that guitarist mount foot pedals to a board. It’s not going anywhere.

There is no detent for A/B, nor is there a lift up stop at the rear of the throttle travel. I will miss that.

One item I wish I had. I think? Just seems like it would be handy but, not having one, it may just be a “grass is greener” thing. I have a jury-rigged mod but it wears out over time. And an idle detent perhaps?

The roteries on each end of the throttle grips as well as those on the right-rear of the throttle base are interesting. They do not show up as axis, but rather pulse a DX code when rotated in one direction and a different one in the other direction.

They do not show up as axis, but rather pulse a DX code when rotated in one direction and a different one in the other direction

Rotary encoders.
I use them for trim wheels in my RTT Controller. 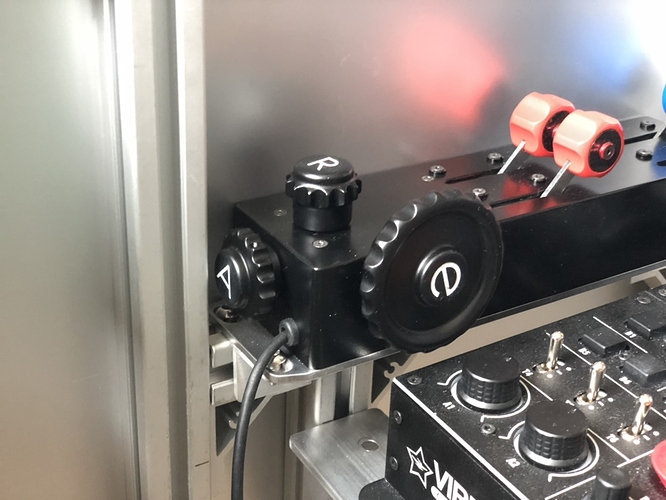 @chipwich, that looks really cool!
I have an idea for fingerlifts for that one. Need to get me a CM2 Throttle first. Send me your…?
What? Put that gun down!
Jeez…

I like the idea of additional control panels… Just look at these!

I’ve only begun converting the Viper at this point and using them for interior lighting ATM.

Rotary encoders.
I use them for trim wheels in my RTT Controller.

I like the idea of additional control panels… Just look at these!

Wow, I really like the one with gear handle and enunciator lights for LG and speed brake state. Huey grip looks promising too. I’m becoming a VPC fan for sure.

I’ve been reading the Falcon BMS 4.34 manual lately, with the goal of learning and flying both that sim and the DCS Viper concurrently. In all these years, and I recently found my original receipt from 1998!, I’d never taken the time to read the Falcon 4.0 manual, only the parts that I was interested in. The latest BMS manual states that it will only recognize the first 32 buttons, a DirectX limitation. DCS does not have this issue. Fortunately, the VPC controller setup app will let you configure the throttle as 2 separate 32 button controllers. At least I think that I read that. So, if you fly BMS you are faced with the decision of either flashing the T-50 CM2 as 2 controllers or give up using the switches and buttons on the base panel. Will report back here what I learn.

December 1998 we were visiting my brother in South Florida for the Christmas Holidays when 4.0 dropped. I picked up 2 copies for us while on a Costco run.

So, it appears that the 32 button split feature is broken in the current firmware. Virpil is aware and working on it. In the meantime, some users have moved to using Joystick Gremlin to map buttons beyond 32 as their respective keystrokes. Now that I think about it, that might be a better solution for B!S rather adding another virtual controller. 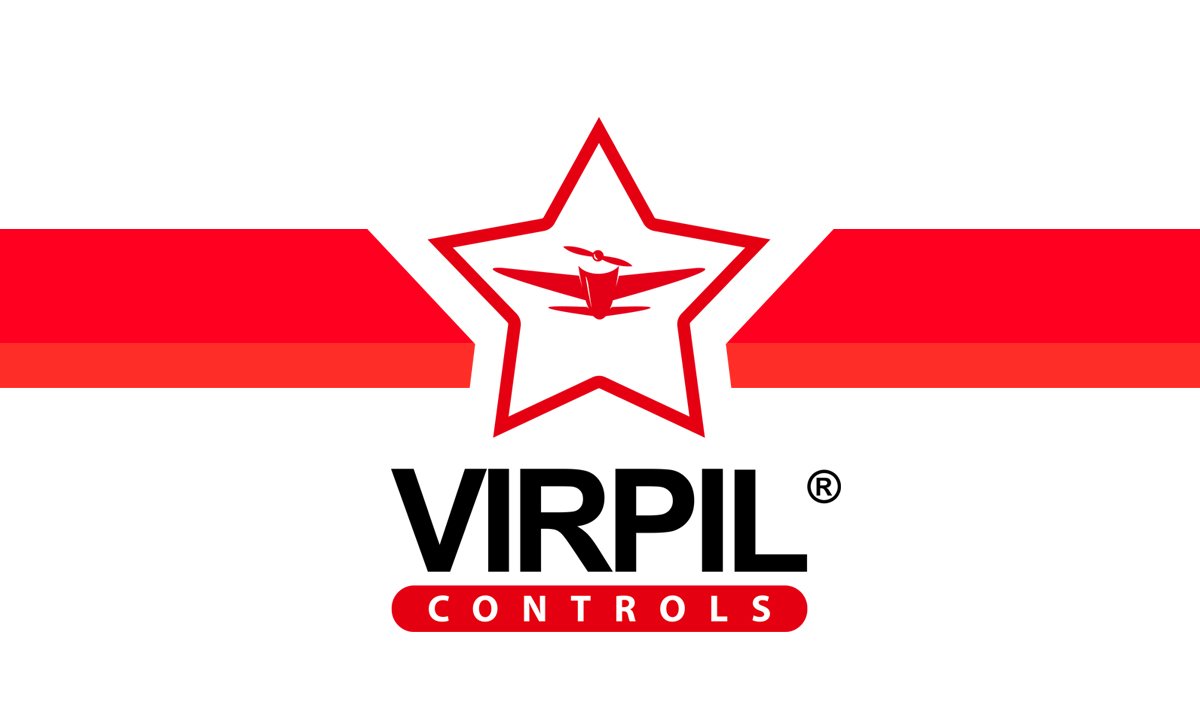 Hi all, I got my hardware (WarBRD + Delta and a MongoosT-50CM Throttle) a week ago and Ive been playing Elite Dangerous a few hours already. As Elite has the 32 Button Limit, Ive setup the Virpil Software to use the virtual devices for the Throttle,...

Just set up Virpils Throttle and Joystick. I am mapping the default IL-2 keyboard commands to the buttons. I have always used JoyToKey (J2K) in the past. J2K has a feature that allows you to assign a button(s) that, when pressed in conjunction with...

My CH Throttle is getting reallllyyy old now. I like the ability to chain USB stuff as I’ve already added an additional 4-way USB thingy.

If we can get the @Troll house of engineering to design either a throttle finger lift or AB detent, it will definitely be a “don’t buy”.

Haven’t really looked into it but, at first glance - why didn’t they do that? Didn’t work on previous model (think the CM-1 had this?); people didn’t want it? Naw. Not enough room (this model looks to have a smaller footprint)? Oh well. Go @Troll.

why didn’t they do that?

Agreed. An oversight, for both military and civilian sims. I love how the Hornet will lift the throttles in the pit when I lift mine on the TM Warthog throttle. Going to setup the two red latched buttons in front of the VPN throttle to be fuel shutoff, since they will be easy to reach when the throttles are at idle.