I didn’t want to add my dumb tech questions to the official looking AH-64D thread.

And this is why I get so frustrated and usually quit trying to learn the study sim modules in DCS World and sticking with the Flaming Cliff planes that all have corresponding key board keys. I’m not sure why the DCS study planes/helicopters can’t have corresponding key commands for those who don’t have a HOTAS.

Anyway, I fly with a simple Logitech Extreme 3D Pro flight stick. I’m trying to do this tutorial and the first thing I run into is switching back and forth the transition mode with the SSS key. What the hell is that and where is it? If I can’t do it on my flight stick because it’s not program there, shouldn’t there be a click or wheel turn in the cockpit to do the task?

Thanks for any help, and sorry for the frustration. Keyboard commands would be nice thou. 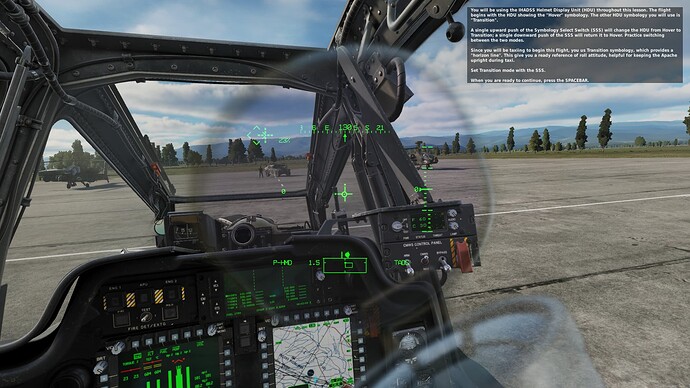 OK, looking at my flight stick commands, it looks like all the keys on the flight stick are available to program, so what is the required/recommend keys to have assigned to a button? Since I use a TrackIR I don’t need the hat switch view keys either. So, I could program them too. But how do I know what a SSS is to program it, not listed in options? And other needed buttons.

the SSS key. What the hell is that and where is it?

It’s referring to the Symbology Select Switch on the stick (pages 62 and 63 of the manual). I programmed it to up and down on a 4-way hat. When I press up on the hat, it changes the Symbology in the IHADSS (page 81). I don’t think by default that it’s assigned to keyboard commands.

Hey Mags, it’s posted here somewhere else, but Matt Wagner has a video on control setup (probably the one that you are watching) and he states that these are what you need for happy Apache operation. I haven’t gotten around to assigning all of them, but found this useful as a starting point.

Thanks, that’s a lot to program on a little stick with 1 hat switch and 10 buttons, lol.

Just curious, what’s the best HOTAS for the Apache? If anyone knows… maybe time to invest, thou I prefer it simple.

That’s a useful list. I’m just a dumb pilot…so hopefully George can handle things for me in the front seat. I just ordered a wired Xbox controller though, as that does look like it will be useful.

Ya, I have one…saw that video, will see about using it once I get the basics down.

It’s highly subjective, but I guess that the more buttons the better. I’m using a Virpil HOTAS setup, but with a TM Viper/A-10 grip. A TM Warthog would work, but you could probably get by with a Saitek X56. I’ve been flight simming for 3 decades, so guess that I’m in it for the long haul and don’t mind spending more for premium gear. Others may find that excessive.

I got the Winwing Orion setup (both Hornet and Viper grips and throttles, not the helo collective…yet). It cost me almost $1000 for the 2 bases and 4 grips in total.

The quality is pretty good for the price. A nice gateway HOTAS. But I’m afraid that he would be want of more buttons. X52 probably minimum for the Apache.

If there is a way to export the keybindings out, I’ll put up my bindings for using my Cobra. One POV hat, 1 4 way hat, a couple buttons, twist grip and throttle. I don’t think I have any shifted keybinds besides the ones DCS defaults to like engine power levers to idle for start.

Can’t find an easy way to kick out my keybinds so here they are in order from the setting menu:

CPG Seat
I use the stick to control the sight rather than the AC when I’m in the CPG seat. If I had to fly from the front seat in an emergency I’d have to keyboard it.

I don’t have every switch or button mapped, I haven’t found that an undue hinderance. There are a few shifted keybinds, but I tried to make them logical and easy to reach. All the default DCS keybinds are still in place (ie Lctrl+C to open close the door). As I get further into the system and they add the FCR I’ll probably have to make some changes, but until then I find this works pretty well for me.

Only bit of caution is the TADS zoom keys overlap the George IA helper keys. As of yet I haven’t found it a big enough deal to change them, but I might move the zoom keys over to the POV hat to fix that conflict.

Thanks for all the help… I’ll see what I can do with all the advice. I think I can fly the damn thing, just getting all the keys and commands down is the hard part.

What I was referring to thou is that IMO every command should have a key stroke assigned, at least the required ones. That way you can fly with the stick but still use the keyboard for all the details. Like what I did here for both the A10 and KA-50… What I don’t understand is WHY the Apache doesn’t have these assigned keyboard short cuts, would make it easier, I usually make cheat sheets. 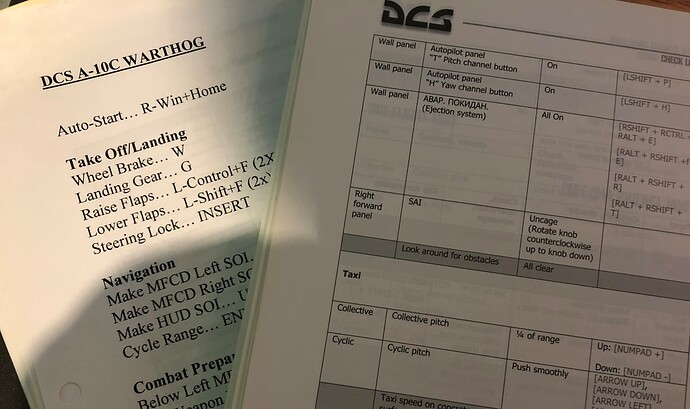 Yeah, the Apache seems to have a daunting array of HOTAS (HOCAS?) controls. We desperately need some brave soul to design a 3D-printable stick and collective head for the masses to print.

I think at a bare minimum they should have enough of the commands with keybinds to at least fly/fight the aircraft. I get not having them for every button (otherwise you end up having something crazy like Lshift+Ralt+Numpad*).

I know people look down on the “shortcuts” the FC’s birds have, but honestly pressing 6 on my keyboard, versus hitting the dogfight switch is different how? Or pressing D for new ordinance type, versus the missile select switch? I think there could definitely be a layer of abstraction in the control for people without HOTAS, or those wanting 900 keybinds.

I don’t look down on anyone for flying anything however they want to, not at all.

It’s just with VR, I can’t use keyboard shortcuts anymore. So I’ve got to great lengths to have 1:1 buttons for everything. Here in a few more days (or weeks, or months…) I should have everything in a Hornet cockpit physically simulated. Unfortunately, that’s a lot of effort just for one bird, and too much for everyone to do. Probably making keybinds for every single function in the cockpit would be impossible as well. I agree with you on the bare minimum aspect.

Things are a lot simpler with WWII warbirds vs modern aircraft, aren’t they?

It’s amazing to think about how complex the machines we’re simulating really are now.

This is a very interesting and informative thread - thanks to @Magnum50 for starting it.

One of the things about the CPG cockpit is that many of the cyclic/collective buttons are also on the TEDAC Right and Left Handgrips. Functions like the cursor controls only have to be mapped once. Plus, as I may have mentioned elsewhere, the weapons trigger on the hand grip does not have a trigger guard.

I found this video to be extremely helpful:
Real AH-64 pilot gives overview of the controls and button mapping - YouTube
and also this one:
Real Apache pilot explains the basics of helmet display symbology - YouTube

I have referred to both many (many) times over te last few months.

Very useful indeed! Thanks Will!

Well just ordered a Logitech Saitek X56 H.O.T.A.S still a month or so away guess they are on back order.

Still not happy about paying $250 for it when my Logitech flight stick is perfect, small, and convenient… back to my saying that keyboard shortcuts should have been made for all the usual mappings. Not all of us want huge HOTAS setups, but still want to fly and play flight sims. Will see how that works in a month or so.

I haven’t used a Saitek stick in a long while, but I think that you’ll be happy with it, once you see how useful it is to have extra buttons and axis at your fingertips, while giving up minimal desktop space.