Another one for those of us interested in being off the beaten path. Gower Field (6WA2) just northeast of Olympia, WA.

“Important. This sloped airstrip is very mesh dependent. As there are many mesh versions out there, your milage may vary. I have used Ortho4XP v1.3 to create a high resolution mesh with smoothed sloped runways. Forkboy’s latest WA ortho should also work well. I do not know how this will function with default mesh or UHD meshes.”

Sloped and narrow, Gower is a tight squeeze for even small planes. It is a small, private, grass strip on the water just northeast of Olympia WA. Requires: handyobjects opensceneryx JB_library RA_library MisterX Important: This sloped airstrip is...

Mmm, performance graphs. I am keen to see 11.30 even if I have to turn off HDR (the light blue bar is HDR off) in VR to get those gains…

Yeah…that’d be a pretty nice boost.

That old Citation cockpit looks like someone vomited instruments all over the panel!

No idea of quality, but hey @Tankerwade!

Holy Alexander Kartveli - how did I miss this? I was only in the warbirds part of the store last week…?

This may now have to be my Christmas ride…

Captains, After more than one year of full time development I am pleased to announce the TBM-900 is on short final and will be ready for your hangars this weekend! Releasing Saturday at Midnight Eastern Standard Time (get ready to hit that buy button...

Some Twitch footage from the developer:

Good news. I love this airplane and since the Carenado version is doomed to the maintenance hanger, eagerly await a review.

If I understood “Vulcan” I would probably see this as a major update. But I don’t so there was nothing in the notes that caught my attention in a positive way. This did make me do a doubletake…

Downwash modeling improvements:
I’ve combined data from a number of NACA tech-reports, and confirmed them as follows:
Flight-test on the Boeing 707 in the 60’s showed that the reduced downwash over the tail due to ground-effect threw the nose down about 2.5 degrees if you never flared. With update from NACA tech reports on observed downwash, we now see the same thing on airliners of that configuration in X-Plane! So, the technical reports have been taken into X-Plane, and the results match flight-test on large aircraft where these pitch changes can be most precisely measured.

Given the weird behavior in the flare with larger airplanes I see the above as justification for the behavior. But he is interpreting it wrong. In the test the 707 was trimmed to be in perfect balance. So to move the nose down 2.5 probably took a relatively tiny amount of force–akin to throwing a beachball on the moon. But in the sim, the upforce needed to counteract this is very big. Well, anyway, I should hold off judgement until I see if 11.30 behaves differently than current.

Vulcan = graphics rendering API change. Essentially something allowing the developers to get nearer the metal for better performance and is often used to be able to utilize more CPU threads for more efficient GPU command batches. TL;DR better framerate on modern systems

The password protection is probably just to stop it being indexed in Google etc as they aren’t ready yet.I suppose it is ok to share here, given that it couldn’t be a weaker password…

So to hell with all of you. And by all of you I mean all of you who break out into a smile whenever someone buys something from the org. You know who you are.

Anyway, it wasn’t like I was NOT going to buy it right? I’ll put these here in the releases thread since it is fairly new.

Hazy day on the General Aviation ramp here at KPSM. The cockpit is extremely well done, and along with the sounds, is the best part of the module

The org reviewer commented that She is tough to taxi, but honestly if you have any time in the Kurfurst, or Lord amighty the DCS:Spit, She is tame by example.

Making the turn to 34. Just beyond that fence is a favorite lunchtime parking spot for many who like to watch the airport traffic

And we are up and pulling away. None of the crazy drama on takeoff that DCS warbirds present, but She does like your right leg all the way to the stop to counteract both banks of Wasp. That ramp has KC-135’s on it as I type this, but close enough X-Plane

Rolling towards the mouth of the Piscataqua. Navy yard in the right middle ground

Turning back in feet dry. KPSM top left and Portsmouth in the center. The sounds are amazing. Really well done and you get a throaty power from it that makes it fun to fly. Highest marks to the devs for sound quality.

Crossing Rt. 16 and the General Sullivan bridge, our constantly unfinished public works project that every region seems to sport

Getting dirty. Yep she can get even less aerodynamic. They did model the variable flaps lever but X-Plane controls doesn’t allow for it. To drop partial flaps you have to grab the lever in the cockpit with the mouse. Probably not an issue for those in VR. If they ever do a D-30 I will spend all the money.

The manual is very specific - never less than 150 in the pattern all the way to the threshold. Considering her size it is obvious that slow=bad

Oh man let me tell you - full right rudder in an office chair that swivels is not easy…And you won’t forget that you need it because she crabs on her own with no wind!

Loooong rollout. You know what they say - If you could build a runway that circles the globe, Republic could build a fighter that can’t take off from it.

So I like it, and I am satisfied with the purchase. She is fast! She has great range with three external fuel tanks if you want them and the guns work. The cockpit and sounds alone are worth the ticket price.

If I have a complaint it is simply the subject matter. What? I know, hear me out for the worst first world problem of all time. The N is my least favorite version of the Jug. By a lot. Listen, I won’t try to convince you that the P-47 is graceful. Its nickname comes from a milk jug. It’s not. But it does have some graceful elements. It has one of the most graceful wing forms of any piston fighter save the Spit. It’s tail is by far the most graceful tail of any it’s contemporaries. Don’t believe me? Just view any of them from the rear fuselage back and you will see what I mean. Those elements are mated to a hulking brute of a steroidal sheet-metal body, granted, but they are graceful themselves.

Except on the N. The N manages to take the only two gracefully pleasing elements of the Jug and make them just as brute function over form as the body they are attached to. They clipped those beautiful wings, and every Spit fan knows how much that hurts, and they managed to make a tail that not even Kartveli could love.

Anyway it is a minor complaint. And it is only here in the forlorn hope that if the Devs happen to wander this way and see my potato screenshots they will also read this far and get to this rejoinder- Do a D-30!

You know who you are.

Looks like OpenSceneryX, the library that is probably the most used for many of these airport add-ons, has been updated (v 3.0.0) with more than 1000 additional objects. I think it is just a matter of running the updater as opposed to re-downloading all of the package. The most important update is that inclusion of RE_Library, which accounts for 900 of the objects.

Some of the changes:

Hey @PaulRix, have you tried the Just Flight Hawk with just the touch controllers? I am leaning to buy but I’ve been in “currently away from my desk” mode recently and don’t care to bellyup to the HOTAS controls if I can help it.

I haven’t, but I will give it a try and let you know how it goes.

I just tried it. It certainly works well enough. You will still need your rudder pedals though. Personally, I prefer using my HOTAS though.

Two more little airfields for those in the PNW by LPNils… 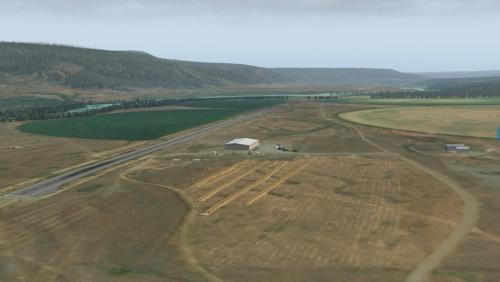 Alexis Creek, British Columbia, Canada A quick scenery for the airstrip at Alexis Creek in BC. The XP default database shows the strip with a misaligned grass runway, so I decided to correct this and dress it up a bit in the process. This airstrip is... 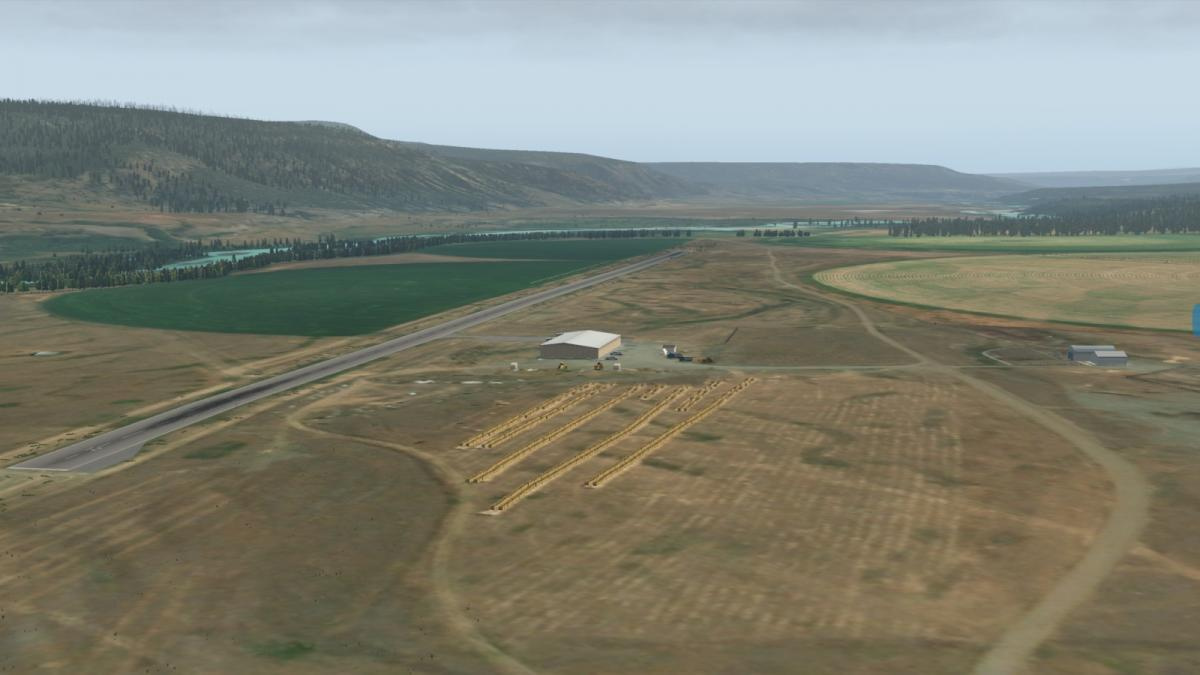 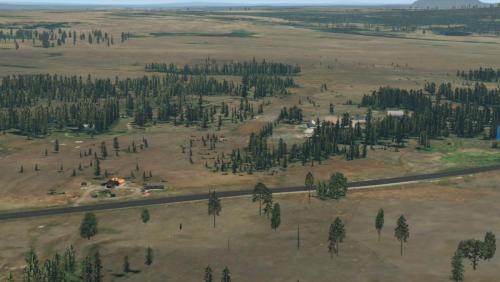 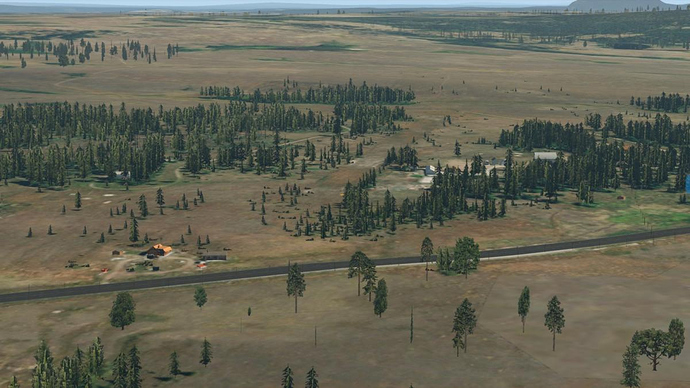 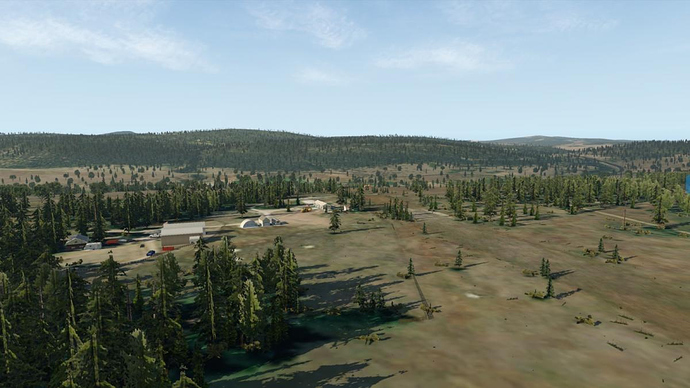 For this one, for some reason X-Organizer did not order my scenery.ini the correct way and I had to manually bump CBF3 up to the top of the .ini file to make it load. But it looks great…!

@PaulRix. Another Hawk question: Have you been able to switch between front and back 'pits? I can do it in 2D but in VR I have to slew myself back there which is a PITA.

Slewing is the only way I have found in VR. And yes, that is a pain.

You probably don’t want to be back there anyway… it could be the airframe I hurled in back in 1991. Lol.