At @Maico’s excellent One Aircraft a Month thread (check it out if you haven’t), we decided to attempt to collectively tackle the common DCS woes of “too much choice” and “too many hangar queens” by focusing on one aircraft for a month at a time. Highly surprising given the name of the thread, I know.

There is a good amount of interest (which is great) and approximately 11 views for every 10 pilots on how we should do it (which is to be expected). So the best thing to do is just to get on with it and figure it out as we go - after all, no plan survives the contact with the enema (always bring an extra bag).

The conversation regarding our aircraft of choice is ongoing - the formal kickoff is at the start of March so I will use the lead-up to to brush up my stick-and-rudder in the Yak-52 in the meantime and we can use the thread as an opportunity to iron out how we go about the format: briefings, how to make most of the month and the joint effort and so on and soforth.

I’ve only done a few familiarisation flights with the Yak, so I’ll try to do a bit of diary from the start here. I know we have a few more experienced mountain yaks around - so please hop in and share your experience / resources - paging @Victork2 at least!

I’ll dig out and scan the checklists I have laminated. I also have a few technical manuals on the beast which I will attempt to upload to Google drive or similar.

The Yak is a fantastic aircraft. I’m available at the weekends if anyone wants to jump in a server and have a few lessons with me. I’m quite familiar with the type in the real world (only as a passenger not a pilot) as well.

With all the trainees names on it… graffiti style!!

In case you guys want your name added to the skin , make sure you post it in the linked thread.
Trying to keep things simple I intend to make the download a “one-off” with no patches and updates to avoid having everyone to re-download the same skin a thousand time.

Nice! I have not had much stick time with the Yak! This is awesome!

I spent part of today going through Chucks Yak-52 Guide and making a short-hand checklist to put into the kneeboard for myself. If anyone it interested here it is (and I put it under my Saved Games\DCS\Kneeboard folder): 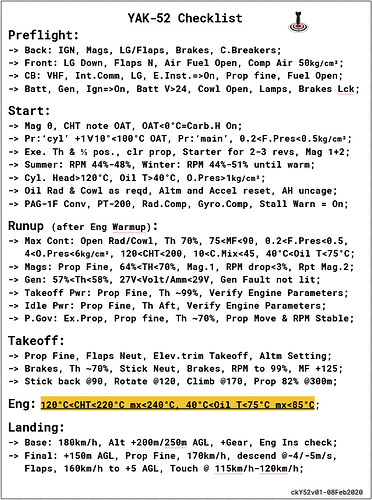 I haven’t had any airtime since Friday, so I’ve mostly been going through Chuck’s guide a bit and watched some Yak videos on YT.

On Friday I did go through the 3 default training missions. They are quite short, so getting through them in an evening wasn’t a problem.

I did find them to be quite picky about accepting the ‘conditions’ to get to the next set of instructions.

You have to wait a good second after Ivan has stopped talking before using the switches - it felt longer than with some other modules.

I also felt that the RPM range triggers are quite specific or required going a bit over/under the threshold level for the next set of instructions to come online…and I still haven’t managed to get through the shutdown after the landing, as the instructions get stuck on switching off the systems.

It doesn’t really matter, the procedures are easy to figure out from Chuck’s guides - but thought I’d note it for others if you get stuck like I did.

I’ll have a bit of time to fly later this week, I hope - for the initial flights (circuit, touch and go’s etc.) I thought I’d use the Nevada map: mainly because I should be able to find the full aerodrome information and charts online and because Chuck’s used one of the airfields for his circuit example.

Nevada doesn’t have the Russian NDB’s, so I guess I’ll need to move over to Georgia when I practice those.

This guy is a DCS simmer and a real life Yak owner:

I’ll need to move over to Georgia

Won’t help since the nav radio doesn’t work, and seems all development has ground to a halt anyway. Was one of the reasons that made me decide I’m not buying any more EA content unless and until this bird is finished someday…

That’s interesting. I hadn’t got around to trying that out. Pretty disappointed with that now I’ve heard. I really love the yak. It’s one of those birds (like the TF51) that because its unarmed I find myself trying to to fly it like I would a real aircraft. Procedures and checklist flying rather than trying to learn the systems just well enough to be able to blow stuff up lol
A great shame. Is the CE2 the same? Are there unfinished bits on that as well?

That reminded me of something I saw - here it was (Mudspike AMA):

Will the Yak-52 ever be patched? Basic things like ADF are still not implemented.

Most certainly, Yak-52 development team is allocated and will start to work on final phase for the project Q1 2020.

What do you mean, this isn’t the right side up? 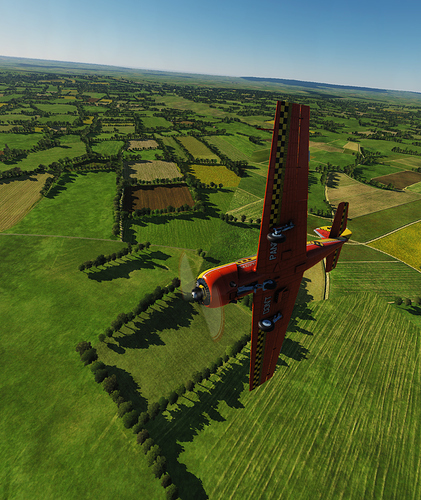 You are a little low to be inverted mate.

Thanks, must’ve missed that. Reassuring to hear.

Looks like you thought you were flying Double Take.

I was up in the Yak-52 last night for my first VR run with a familiarization flight. After spending some time with Chucks Guide, my checklist shorthand page was enough for me to get her up and running without having to go back to a manual

Flight went well. Cross-wind take off wasn’t too bad and I did a bit of a Northern France scenery tour from the new Grass fields on the south edge of the map. Performed a few ‘maneuvers’ before bringing her back to base. It was a really enjoyable experience!

I wonder if @Wes has the Yak-52 in any of the Holle Point North missions - enough for a few of us to get together for some formation flights?

It may be on the training range, I do not recall. I’ll check later.

I’m pretty sure this is my single biggest deficiency in DCS: World (which is saying something), and I was actually going to ask for that myself. I’m around tonight (EST), if anybody wants to meet up and fly.

Nevada doesn’t have the Russian NDB’s, so I guess I’ll need to move over to Georgia when I practice those.

The ADF is not implemented in the DCS Yak-52 anyway… so it won’t work on Caucasus either.

It may be on the training range

There’s only two Yak-52 spots on that one and I used it to clip a blade off your Spitfire, as you may recall. I don’t have any scenarios tailored specifically to it yet.

Any chance of adding a couple more?

If both the server and the client has a Mudspike skin on the Yak, does that mean we get MP formation shots with Mudspike skins??