I flew my first mission in a campaign generated by Pat Wilson’s gem of a program for Flying Circus, AKA PWCGFC. I accepted most of the defaults other than choosing a squadron (RFC 43), role (fighter) and air and ground density (medium). The resulting mission was pretty good. Well at least until I spent too much time lining up a shot on a Halberstadt, thereby letting the observer damage my Camel. Regardless, lived to fly another day. Forgot to hit the video capture, but did manage a few screens.

Squadron disposition prior to my first mission.

Squadron warming engines for our sortie.

My mustache is getting long.

Following Maj Hackman over no-mans land. After this things got busy and I neglected to grab more photos. 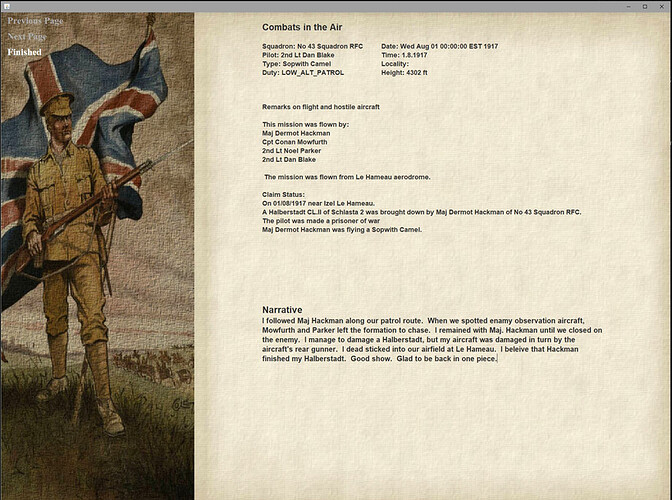 This could sound as some kind of addon while it is not.

FC is stand alone title from same devs and running on same engine as IL2BOX series.

Edit: clarification as to stand-alone vs GB add-on. From the developer:

IL-2 Sturmovik: Flying Circus - Volume I is part of the IL-2 Great Battles series of products and can be played as a separate stand-alone product or be integrated with other Great Battles titles such as Battle of Stalingrad, Battle of Moscow, Battle of Kuban and Battle of Bodenplatte. Combine all titles to create one big WWI and WWII air and ground combat simulation.

Since it is viewed as somewhat a niche branch within a niche product, the original release (FC Vol 1) is limited to the Arras map, a WW1 plane set, and quick mission builder. There are no missions, scripted campaigns, or careers delivered by the developer. It basically being thrown out there to the sim community wall to see what sticks. FC is somewhat based on Rise of Flight, but with the new terrain engine and other improvements. There has been some criticism that it is not being given the same love as the rest of BoX GB, but the developer has been open about this. A vote with your wallet sort of thing.

For a WW1 novice like myself, it all looks, sounds, and feels amazing. The main criticism on the Arras map is the low res rendering of no man’s land and for those familiar with the Arras plain, the lack of some of the notable landmarks. However, others have said that more known landmarks have been recreated in great detail. I wouldn’t know. Flying in what feels like a string and fabric kite, wagging along behind a chugging tractor engine and swinging wooden propeller, I’m so smitten by the experience, that I’ve not had much time to think about the war in the trenches. And that’s not to mention the threat of having said machine eviscerated by a more experienced foe at any second.

For missions and campaigns, a gentleman named Patrick Wilson has come to the rescue and developed an amazing campaign generator, initially for the WW2 era maps and aircraft, now a dedicated version for Flying Circus. For better or worse, it is a Java based application that drops easily into your base IL2 BoS install folder. Add some minor tweaks and you are on your way. It also generates co-op missions! Did I mention that it is free?

Sorry for this ‘word games’ but I will put it the other way :

FC together with BOS are modules for the Great Battles sim framework. So GB is similar to say DCSW

Is there anything to drop bombs on?

I haven’t tried it, but PWCG does generate bombing missions.

Good summary, @chipwich!
I love FC for what it is, right now. But I do sincerely hope that there will be more volumes of FC in the future! More planes and maps and of course the career generator.
In the meantime, Pat Wilsons generator is a very capable substitute.
WWI Dogfighting is epic, in VR!

I killed a balloon today, most pleasing results

Forgot to hit the video capture,

The video capture has a nasty little glitch. It quits recording without telling you.

Whenever you record a track in IL-2 Great Battles, recording will silently stop once the track file has reached a size of 512MB.This is particularly annoying when you are fighting online, on a crowded server, because tracks will grow quickly (512MB can be reached in less than 5 minutes) and as fate would have it, your recording will stop right before the most interesting things happen in your mission/sortie.

He created a mod as a workaround until this game glitch is fixed by the developers.
IL-2 Great Battles Recorder Mod. 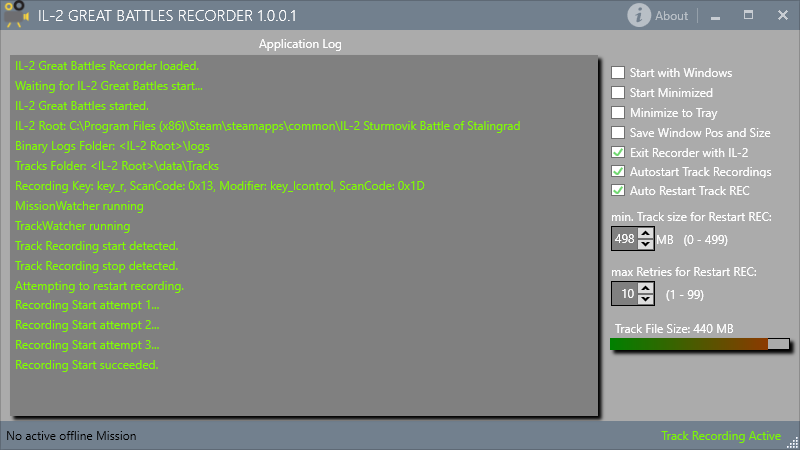 There is a Mediafire download link for the Mod in the thread at Special Aircraft Service.

This could sound as some kind of addon while it is not.

FC is stand alone title from same devs and running on same engine as IL2BOX series.

Right, but that would technically apply to all the IL2 titles. For example, I can pick Flying Circus aircraft in IL2 and fight against them now, even though I don’t own FC.

Yes. I don’t own FC but able to generate this mission 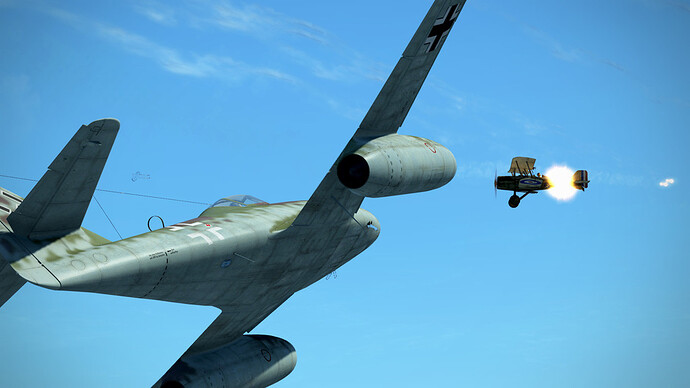 Puts pedantic nerd had firmly on

Actually, this picture is unrealistic. The shells from the Me-262’s 30mm cannons should just pass through the fabric fuselage and not detonate. This is similar to what happened with the Bf-109’s cannon rounds and the Hurricane’s fuselage; the rounds would typically pass clean through without detonating, and could just be patched over.

I propose that we all boycott Il-2 for this obvious and glaring inaccuracy.

And now we return to our regularly scheduled program. . .

Nice shot by the way!

Flew another PWCGFC mission today, ground attack. Let me just say right here that the Camel is not very well suited to this role. In other words, the natural tendency is for it to bob and weave like a rodeo bull. I must have wounded every man in the second battery, none of them seriously. Lots of missing fingers, ears, and toes. But they are all having a beer in the mess tent tonight taking a ■■■■ at the Camel pilot who can’t shoot straight.

Better not ingest any of that falling debris into those jet engines.

ill timed toot after too many beans pre-flight

Ah, he was trying to match your jet propulsion! Makes sense to me.

but that would technically apply to all the IL2 titles

I agree. So we can say that all the titles like IL2 BOX and FC are stand alone titles which merge together.
I mean you dont need to own any IL2 BOX title to play FC, right ?

I mean you dont need to own any IL2 BOX title to play FC, right ?

For now, RoF offers a lot more variety and depth than FC V1, but its appearance is growing increasingly dated and all development ceased quite awhile back. FC is the way of the future, although I dislike the acronym as DCS/LOMAC used it for their expansions long ago, making it context-dependent.

I have both RoF and FC installed. I still have CloD and even Il-2 46 installed, so…