The DCS open beta now includes this utility with the release, you don’t need to download anything. When DCS starts it will detect the Odyssey headset and show a special ‘calibration’ window. Follow the instructions in that. Once you hit ‘Make Symmetric’ then it will write out a file of your settings here:

You can either edit that file or remove it if you want the utility to appear again.

If you find the ‘Make Symmetric’ doesn’t work for you then you can try editing the values to swap them differently here:

This way of doing it (although a bit fiddly) really helped me out in terms of getting the clearest DCS image as yet for the O+. Reversing the left/right entire block of values is the way to go I think. Hopefully ED can eventually update the code so we don’t need this extra Visualizer.dll file inserted and set up: https://forums.eagle.ru/showpost.php?p=3819919&postcount=98

Noticed this on the ED forums and thought it worth pointing out here as interesting.

Hello all, I have read and read and I have seen others with the same issue.. BUT no true fix (for me). I have just received the Odyssey+ and I play DCS (Non Steam). As far as I know, the Samsung Odyssey and similar HMDs requre Steam VR. I have...

Essentially what is happening is that the left / right images that make up the stereo 3D view in the headset in DCS are coming out misaligned for some people. This causes a feeling of being ‘cross eyed’, in that the rendered views are not lining up vertically (say the left eye view is a tiny amount higher than the right for example, breaking the 3D effect). It seems specific to DCS as most other Unreal/Unity engine games already fix for this.

Each headset comes with an initial factory calibration, where the device settings are given back to SteamVR on how the views are rendered. You can see you own headset settings by running vrcmd like this:

As you can see, the left and right projection top/bottom values are out a little, meaning there is a physical alignment that the software normally takes into account. I think the issue is in VR DCS (and it seems Euro/American Truck Sim as the only other one) this mismatch isn’t taken into account, causing a blurry feeling for some. It seems to be worse for people with higher IPD settings.

It looks like ED knows about the issue already, plus a few more people are tracking info about it here:

For a year I used Pimax 4K goggles without any problems. I use VR only when I fly on the DCS simulator. I used the promotion on Black Friday and bought new Samsung Odyssey Plus goggles. What was my disappointment when it turned out that practically... 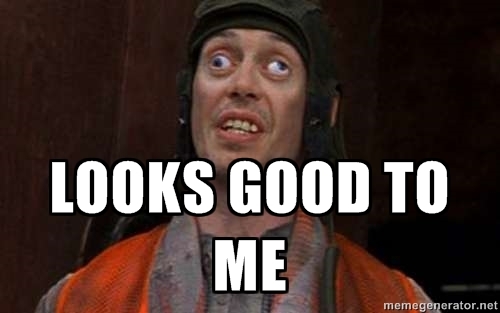 So you are basically “Wash Out” from Hot Shots? 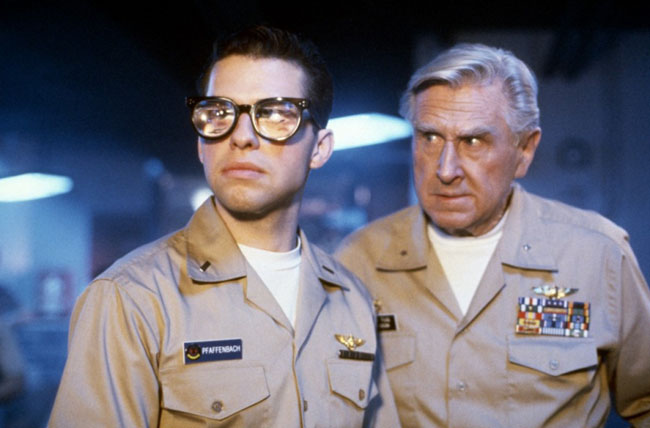 Problems what problems are you talking of?
I have no problems!

Apart from jokes i felt a little this problem and reacted tilting just a little bit the headset! (Not as much as in the photo!)

With the latest beta, the bottom 2/3 of the screen are solid white in my O+. Works fine in other games.

Sounds similar to this one?

Does setting DCS in-game PD to 1.0 and using the RenderTarget setting and SteamVR SS to 200% help?

So for some people (I think I notice it a bit) this vertical alignment bug for WMR in DCS is still around.

One interesting thing I read on the ED forums was that some people are even trying to use Revive to run DCS in WMR, as that doesn’t suffer this misalignment issue. This is a real ‘house of cards’ (@BeachAV8R you know I love them) and takes some explaining but it goes like this:

Revive is an injection library to make your SteamVR device pretend it is a native Oculus device. It is essentially reporting back fake hardware ids and translating some calls. It allows people to play Oculus exclusives on anything that runs SteamVR (Vive, or WMR devices through the SteamVR for WMR app).

So what you can do is install Revive from here, go to SteamVR and select ‘Revive’ from the dashboard selector (press down the WMR joystick) and then go back to your 2D desktop and see the desktop tray icon for Revive. On that right mouse button menu and choose ‘inject…’ and pick the bin/DCS.exe to run.

What is happening now is (deep breath) DCS thinking it is having the Oculus device talking to it, so uses the Oculus SDK, that then talks to Revive, that is then talking the SteamVR API, which in turn is being translated to WMR native calls. It’s as simple as that!

The reason for doing this is that the Oculus DCS support doesn’t have this vertical misalignment bug, so that things far away (or rather not in your face, so like anything outside the cockpit) now appears clear. You can actually see ships and ground vehicles without the ‘blur’ caused by the left and right eye stereo picture being misaligned.

The feeling that WMR is not clear in DCS is often this bug. ED are hoping to fix it, but are struggling to recreate it still.

Unfortunately, Revive is a bit broken by SteamVR’s recent ‘Motion Smoothing’ update, so people are waiting for it to be fixed again. It judders too much, despite the fact that before the recent SteamVR update it actually worked pretty well. The bug can be tracked here - DCS problem with Samsung Odyssey Plus · Issue #1163 · LibreVR/Revive · GitHub

Hopefully this gets sorted out, whether by revive or ideally a DCS fix. Even trying it out with the judders you can detect that things do look different outside the cockpit. It’s sort of frustrating, as now I’ve seen it then I’d love to be able to play with it that clear.

What is happening now is (deep breath) DCS thinking it is having the Oculus device talking to it, so uses the Oculus SDK, that then talks to Revive, that is then talking the SteamVR API, which in turn is being translated to WMR native calls.

I’ll be interested to try all that. Me - I’ve spent my entire evening trying to get multiple windows into OBS and microphones and WMR…LOL… I did figure it out though.

Bloody hell! If it’s not one thing, it’s another. Good thing that we have WikiFrog to keep us properly informed.

There is a fix for this, direct from ED. I forgot to post about it, but any O+ users should at least try it.

The visualizer looks a lot like this (not my image, stolen from the ED topic), but essentially if you make the left/right eyes symmetric then it helps DCS clarity a lot.

Cool…interested to try this. I’ll do it tonight…

Just some background on this, as it is a confusing topic. Each headset does report back it’s left / right calibration values (a sort of factory calibration test).

Games based on the Unreal or Unity Engines already take these values into account, so this is more to do with how SteamVR is reporting them to DCS and its specific rendering engine. As the stereo view given to the headset needs to align up the left / right vertical images, if they are a little out a bit (vertically, i.e. is the top of your HUD frame in the left eye the same as the right eye etc) then things can seem unclear or at least tire your eyes out as they naturally adjust. Eyes are weird in that they can get used to little differences like this.

Some users have reported that using the ‘Make Symmetric Using Left’ button helps them a lot, while others prefer ‘swapping’ the left and right values, e.g. 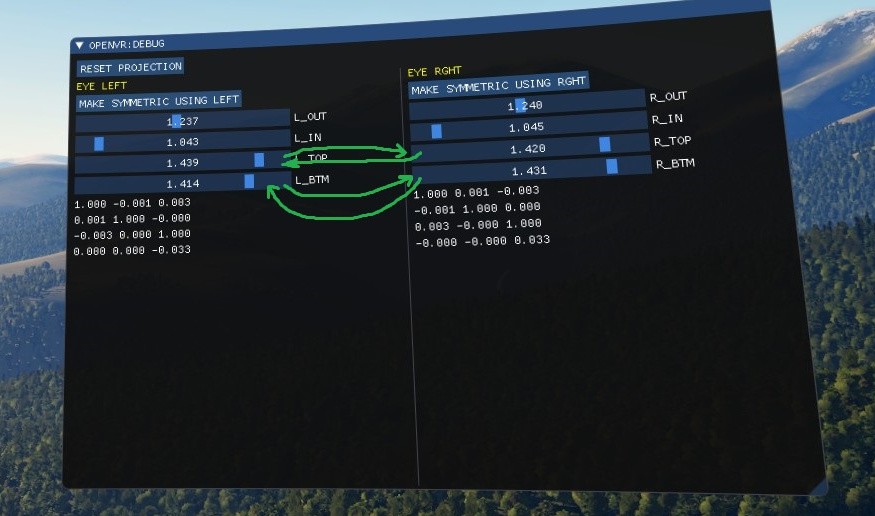 …and Values swapped (as close as the sliders allow, hence out by .001 sometimes…): 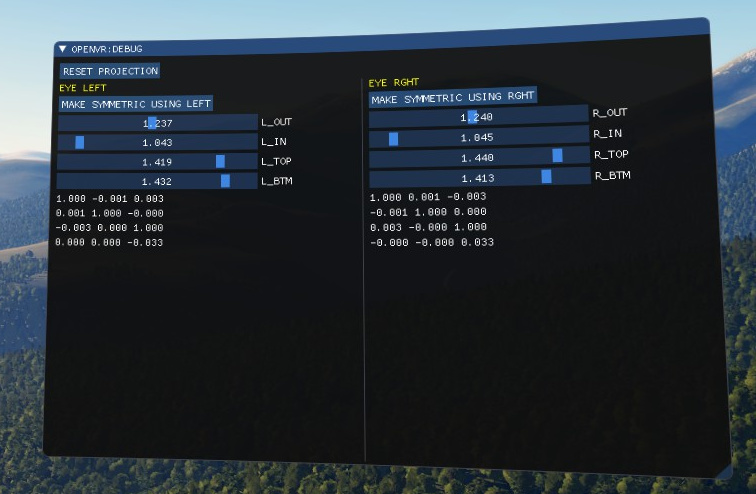 I am not sure what is best to use as it’s a personal preference, so I just use the simple ‘make symmetric’ button way, but thought I should point out the other way in case people find more success with it.

Did not get a chance to try this yet. Had a funeral to attend today, now going flying all night…gonna have to recover and try to give this a whirl tomorrow.

This way of doing it (although a bit fiddly) really helped me out in terms of getting the clearest DCS image as yet for the O+. Reversing the left/right entire block of values is the way to go I think. Hopefully ED can eventually update the code so we don’t need this extra Visualizer.dll file inserted and set up:

This way of doing it (although a bit fiddly) really helped me out in terms of getting the clearest DCS image as yet for the O+.

Ditto…! This worked good for me too and I agree, it is the best that DCS has looked on my O+. I had a great hour or so getting re-giddy about all the awesome modules I don’t know how to operate…but man, they look great. I will say though…that I did manage a 2-wire on my first pass in the Hornet after being away from it for at least several months.

I haven’t lost that loving feeling.

Tonight was a VR bonanza. FlyInside, DCS, Aerofly 2, and X-Plane. No VTOL though. I’m on a self imposed hiatus until I get my “work” done.

Any-who…thanks for the misalignment bug correction…it is fantastic! Can I just save that 800ZBA LUA file and put it back in there whenever DCS updates?

Can I just save that 800ZBA LUA file and put it back in there whenever DCS updates?

I think so yes, in that once that is there then the updated Visualizer.dll will use it and then not appear. It might be worth checking after each patch that the new ‘Visualizer.dll’ has survived the update, and if not, put it back in.

yes but i think it’s not perfect yet…

I agree Jimmi, I think it’s a case of people’s units being a bit different plus people’s eyes having a different ability to adjust. It gets us a bit closer, so hopefully the ED engineer that worked on this can see that it helps and then put it in the base DCS World without us needing to do this.

@fearlessfrog,
Buddy, hate to say it but this crashes my game. I put in Visualizer.dll and cant start the game. I then put the Visualizer from my backup (cos of course I backup first) and game runs normal. Tried 3 times and got same result even after redownloading the dll. Just a heads up…

It works for me on Open Beta 2.5.4.28090. Should be put in the DCS/bin directory, and overwrite the existing .DLL (so rename the old one to keep it). Obviously this is Samsung Odyssey Plus WMR stuff only.

This is the one I am using. I’m not even sure if it’s in the open beta without this or not (it may be):